END_OF_DOCUMENT_TOKEN_TO_BE_REPLACED

More and more people are renouncing US citizenship...

Last year, nearly 1,800 Americans surrendered their citizenship. In a nation of 300 million folks, 1,800 émigrés is hardly a rush for the exits. But the recent trend is, nevertheless, intriguing. 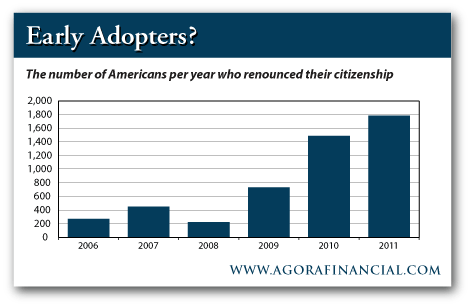 Giving up citizenship would have seemed as incomprehensible as...go ahead, create your own simile.

Bottom line: Surrendering US citizen was absolutely unthinkable. But not anymore. Now it is "thinkable," albeit still relatively rare. The absolute numbers are still tiny, but the trend conveys a very large message: Discontent is on the rise.

Increasingly, the used LeSabres and Augusta Municipals are winning the contest. And probably not because they are so alluring, but rather because the "Aston Martin" is starting to sputter like a used moped and "Augusta National's" fairways are starting to sprout more weeds than its deep rough.

To be clear, your California editor remains an American citizen with a valid American passport...and no pending petitions in any American embassies to surrender his citizenship. His observations, therefore, are not personal...but they are heartfelt.

When Americans begin abandoning the "Land of the Free" to seek greater freedom elsewhere, it is time to sit up and pay attention; it is time ask yourself, "Why? Why are they leaving? What's wrong?"

Is it just a "tax thing" or are other forces in play? Is it because folks don't like:

Who knows the exact reason why 1,800 Americans chose to leave last year — nine times as many as left four years earlier. Certainly, each one of them had their reasons. But like a corporate insider that sells his own stock, there's one thing you know for certain about his motives: he is not selling because he believes the stock will go up. Maybe he doesn't believe the stock will go down, but no one sells a stock they believe will go up.

Buying Gold? See how BullionVault can save you money while giving you a choice of vaulting locations in your choice of international jurisdictions...