END_OF_DOCUMENT_TOKEN_TO_BE_REPLACED

Food supplies now rely on domestic refining as much as energy independence...
A REPORT written by retired Air Vice-Marshal Jon Blackburn released in late February concluded that, "Over the 13 years, as our oil production has declined and imports have grown, there has been a rapid decline in Australia's capability to produce its own transport fuels," says Dan Denning in his Daily Reckoning Australia.
It is one thing to concede your car manufacturing industry isn't globally competitive. It is quite another to decide that as a nation, you no longer need to refine your own crude oil into transportation fuel. That decision puts you at the mercy of refineries outside your own borders.
Yet that is the decision Australia seems to have made, if only by doing nothing.
The image below, taken from the report, Australia's Liquid Fuel Security, shows that Australia's transport fuel supply chain is already stretched. The number of local refineries is in decline. And the sea lanes through which crude oil and refined fuel are transported to Australia are crowded and increasingly dangerous. 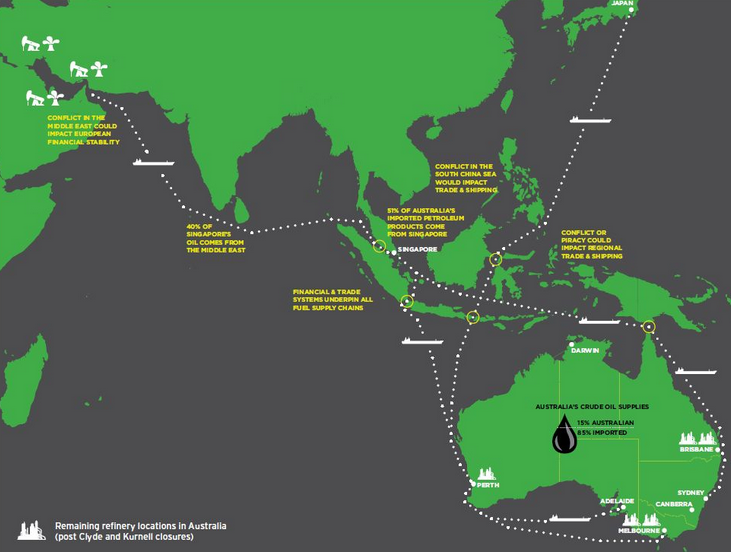 The report says that in the event Australia has no refineries, it would be reduced to just 20 days of liquid fuel stocks. It concludes that, 'If this happens, then Australians will suffer food shortages, will not have adequate access to medical services or pharmaceutical supplies, will not be able to get to work, and if the problem lasts for more than a few weeks, many will no longer have work to go to.'
The scenario described in the report may sound fanciful. But modern civilisation runs on energy. Without it, most civilisations are about three days from anarchy, to paraphrase Robert Heinlein.
Beyond the ability to put ships to sea and planes in the air, not having the ability to produce your own refined fuels is a major strategic gamble that you'll always be able to get what you need through trade.
This, of course, is the real issue. David Ricardo was right about a great many things. One of them is that nations should do what they have a comparative advantage in. If Australia can't make cars or refine fuel better or cheaper than other countries, it ought to abandon those industries and stick to what creates real value. That's the textbook theory, anyway.
In reality, the world isn't any less dangerous today than it was 100 years ago, when the First World War broke out. Australia doesn't need to build an Armed Forces capable of invading China. It needs an Armed Forces capable of defending Australia's EEZ should that be challenged in the future. Whether it will have that capability in 20 years remains to be seen. In the meantime, there is China to consider.
"We hope for peace, but at any time and under any circumstance, we cannot give up defending the nation's reasonable interests," said Chinese President Xi Jinping. And thus we enter a more complicated era for Australia's relationship with its largest trading partner.
China's growing economic might comes with greater regional ambitions. Australia has to balance its economic dependence on China (let's call it what it is) with the desire for self-preservation, keeping in mind the United States may or may not be in its corner in future Asian street fights.
Australia got a taste of how complicated things could get when Foreign Minister Julie Bishop was publicly rebuked by her Chinese counterpart late last year. Chinese Foreign Minister Wang Yi said Bishop was 'irresponsible' when Australia condemned China's declaration of an Air Defence Identification Zone (ADIZ) in the East China Sea.
The subject came up in a recent Senate hearing. Peter Rowe, from the Department of Foreign Affairs and Trade (DFAT), said, of Yi's statement, 'I have never in thirty years encountered such rudeness, actually.' Rowe was quickly hushed up by his boss Peter Varghese. But the whole exchange shows you how delicate Australia's situation is.
In the end, of course, the outbreak of armed conflict in Asia is something we can only speculate on. As an investor, there are a limited amount of practical precautions you can take for a possibility like that. But my point in discussing the various military build-ups in the region is to show that you that the next 20 years aren't going to be anything like the last 20.
China is the big winner from what happened in Crimea because a precedent has now been set. The era of Pax Americana through Dollar dominance and military force projection is over. Rising powers like China, or even Japan, will now have to decide how to fill the gaps left by the gradual withdrawal of the US. Australia needs to prepare too.
Of course, I may be jumping the gun on the extent to which the US may recede from the global scene. Pride goeth before a fall, according to Proverbs. If America gets a Republican President in 2016, you might see a new surge of American nationalism, even though the country no longer has the money to match its ambitions.
But any way you look at it, Australia will have to do more to defend itself and its interests in the future. It will largely be the realm of the military, in close cooperation with the intelligence services. It will be a big challenge.