END_OF_DOCUMENT_TOKEN_TO_BE_REPLACED

This might not be the economic or financial backdrop that gold prices love...
AFTER start-August's US payrolls surprise, subscriber 'RK' emailed to query this comment from my Friday analysis, writes Gary Tanashian in his Notes from the Rabbit Hole.

"Gold is getting clobbered as it should. Let's please keep it real, because a lot of gold bugs are not going to. The case for gold, silver and commodities rests on an inflationary phase, which strong jobs and wages would indicate out ahead. But for now, the hit to the precious metals is logical."

The case for commodities (cyclical) always rested on an inflationary phase, but in noting that the same is true for gold it appears that we have deviated from the preferred case for a strong, longer-term gold bull; and indeed we have.
The point I have been making as the Semiconductor Equipment cycle went positive a few months ago and gold broke down vs. palladium more recently, is that cyclical forces are at work now. That would NOT be the preferred fundamental environment for gold or gold miners.
In lumping the gold sector in with the 'inflation trade', it is just one of many areas in which to deploy capital for an inflationary environment, which is why I often go on about tuning out the gold-obsessive "community".
The concept is very simple, yet it can get confusing because there are so many opinions and analytical sources flying around out there that it can be hard to cut through the noise. Using the 2002-2007 'Greenspan Blueprint' as we have been doing, it is as simple as noting whether or not gold is out performing or under performing vs. cyclical commodities. With a couple notable exceptions, it continues to out perform.
Gold has under performed silver (1st) and then palladium (2nd). These are two precious metals with more pro-cyclical characteristics than gold (given their industrial uses), and it stands to reason that the earliest, most sensitive indications of a cyclical (and potentially inflationary) environment would come from within the precious metals complex.
The 2013 signal in PALL-Gold for example, confirmed the Semiconductor Equipment sector's up ramp that we noted that January.
In the current phase, we noted the Semi Equipment up ramp in March and began to follow it, looking for a 3 month 'bookings' up trend, which was achieved in April (data released in May). 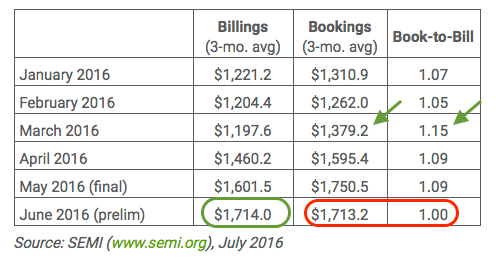 We then noted a potential 'W' bottoming pattern in the cyclical PALL-Gold indicator. This has now all but confirmed a cyclical bounce, if not phase (that would come with a cross up in the moving averages). If other commodities follow suit, including those that at least partially impair gold mining cost structures, the gold sector would become a low priority investment destination.

Conversely, if the current economic bounce turns out to be a fortuitous (and convenient) pre-election bounce that is doomed to flame out, the gold sector would go right back to being the primary investment destination in a renewed counter cyclical environment.
Remember, this is not the market report with the pompoms and gold bug slogans. It is the market report that tries to understand what is happening, in the long-term, intermediate-term and short-term. What has been happening, especially since Brexit put an (!) on the deflationary bear phase that had enveloped markets post-2014, is a cyclical bounce.
By using indicators like those above it supported our view in looking past 'BREXIT!!!' and a couple bad employment reports, which were for analytical purposes, hype and backward looking data, respectively. And what do you know? July Payrolls just marked the second strong report in a row. We always need to look forward, not backward and not at the headlines of the day.
The good ship Lollypop sails on, servicing itself quite nicely with Education and Health Services, Professional and Business Services, Retail Trade and last but never least, Leisure and Hospitality. 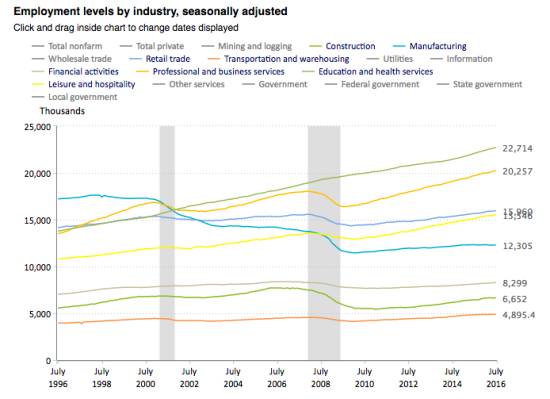 So for the time being at least, if things continue toward a cyclical backdrop the gold sector would not be special (at best) and could be at risk because of its big run up amid fear, angst and the counter cyclical environment we began tracking a year ago with the Macrocosm theme.
The pompom brigade may continue to obsess on the sector in a vacuum. But we will need to go where the short, intermediate and long-term analysis says to go. Right now it says "cyclical", for a bounce at least. We remain on the intermediate plan. But markets being what they are, no plan is black and white or fool proof.