END_OF_DOCUMENT_TOKEN_TO_BE_REPLACED

Money printing is the near-certain "solution" to the Greek, Euro and wider sovereign-debt crisis...

But let's pause for a moment to reconsider what may have happened last week with Wall Street's "trading glitch". Is it possible that traders saw the cops beating protestors in the Streets and surmised this:

"No matter what deal European leaders come up with to bailout Greece, that deal isn't going to fly on the streets of Athens. The Greek people will not feel obligated to keep the promises made by their politicians to the IMF. Greece is going to default on its debt..."

If Greece goes, then a lot of interesting things start to happen. But that is not the "narrative" being put out by the mainstream today. The official line today is that the $500 billion loan and lending package agreed to by European government is enough to roll over Greek debt, avoid a crisis, defend the Euro, and put an end to the widening credit default swaps in the derivatives market.

The trouble for Europe is that Greek debt is the tip of the spear. The Greek's must roll over $15.8 billion in debt this year and $31.3 billion next year. But it's hard to imagine Greece devoting a larger share of tax income to debt service while the economy shrinks. It won't be politically tolerable.

So what about the $251 billion in Italian sovereign debt that matures this year? And the $76.5 billion Spanish debt? And the $17.9 billion in Portuguese debt? The €500 billion aid package is not enough to disguise the fact that Europe's debts are larger than Europe can repay without resorting to debt default or the alternative: massive money printing.

The bond market has figured this out. In Europe and North America, the cost of buying insurance against a bond default in corporate and sovereign debt. According to Bloomberg:

But did the action in the credit default swaps market migrate to Australia? Well, according to Bloomberg this morning, the news of the big deal in Europe took some starch out of the widening CDS spreads here in Australia.

"The cost of protecting Australian corporate bonds from non-payment fell the most in more than nine months, according to traders of credit-default swaps. The Markit iTraxx Australia index fell 15 basis points to 114.5 basis points as of 8:19 a.m. in Sydney, the biggest drop since July 21, according to prices from Nomura Holdings Inc. and CMA DataVision in New York."

That would suggest some major easing of the tensions in credit markets. But we'd take that with a major grain of salt. One quotation and one chart from the weekend tell Australian investors nearly everything thing they need to know about the effect a European sovereign debt meltdown would have on Aussie stocks and financial institutions.

The quotations come from Eric Johnston at The Age. On Saturday he reported that:

"Banks face a surge in wholesale financing costs as fears of contagion spread through global credit markets, with still-fresh memories of the funding squeeze during the global financial crisis not far behind. Some of the nation's major banks were yesterday believed to be looking at measures to top up holdings of liquid assets as concerns about risk increased on European credit markets. While Australian and Canadian banks continue to have ready access to credit markets, longer-term debt was becoming harder to obtain, bank treasury sources said."

Once again the link between solvency and liquidity rears its ugly head. Europe's troubles migrate to Australian balance sheets. And you can see the final proof of the pudding in the chart below from CMA Market data. It shows that when anxiety peaked last Friday night, it was Aussie banks that showed the largest credit deterioration in terms of the increase on their CDS. In other words, the cost of insuring yourself against default in the bonds of these Aussie firms went way up late last week... 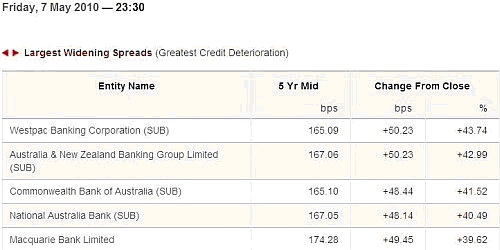 That doesn't mean any of these firms are going to default. But it does mean bond market investors realize that a global capital crisis that begins in Europe has a massive affect on Australian banks. The effect is not so much on Aussie loan losses of European assets, although there is some exposure there. The effect is a liquidity crisis which forces banks to raise cash by selling assets.

The assumption domestically is that the banks won't have any trouble finding money to borrow abroad. But it might be a lot more expensive. And that might lead to higher bank interest rates here and less borrowing. Oh and by the way, the CDS rates for the miners were up too, last week, thanks to Kevin Rudd's 40% tax on natural resource companies, plus concerns about a China slow down.

In the meantime, if you're wondering what the end result of all the machinations in Europe are, it's probably more money printing, which explains Gold's recent move. And because the biggest debt problem of all is in America, you can expect more printing too.