END_OF_DOCUMENT_TOKEN_TO_BE_REPLACED

Central bankers face no choice, no decision. They're simply doing 'what they must'...
DO WHAT it must, says the European Central Bank, writes Gary Tanashian in his Notes from the Rabbit Hole.
Not "do what it thinks would be the best course for the European economy". Not "choose the path of least resistance in guiding the financial system to recovery."
The ECB will DO WHAT IT MUST.
As I have written til I'm blue in the face for the last 10 years, we are in the age of 'Inflation onDemand'©, 24/7 and 365.

Let that sink in for a moment.
Japan is trying to kill the Yen, China is dropping interest rates, and the world over we have a rolling inflationary operation that is little more than a game of Whack-a-Mole. Bank of Japan popped up a couple weeks ago and now this one.
Transitioning to the country and policy-making establishment that has truly shown 'em how it's done over the last 6 years, we look to the United States' S&P500 stockmarket index...with its eternal attendant, ZIRP...and add a view of the Consumer Price Index as well. 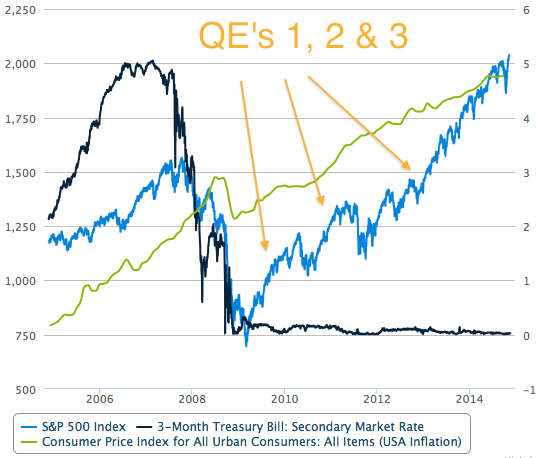 One message that can be interpreted from this chart is that stock markets have been used (controlled) as a mechanism for asset owners to keep up with the reported effects of inflation (CPI). Saving has been disallowed, legislated by policy right out of the equation. Everybody into the pool, if you've got the bankroll to play.
We have maintained since the post 2012 lift off of the most intense phase of the inflated stock bull market that there is and has been no bubble in stocks (though they have become over valued even by traditional metrics, even if it is worth asking 'What is value today, anyway?' when considering the constant inputs and distortions inflicted by policy makers) but rather, a massive and ongoing bubble in global policy making.
First Alan Greenspan laid the groundwork and the initial blueprint (asset inflation). Then his inflation operation was liquidated with extreme decisiveness and now, from the ashes we have a new global asset inflationary operation born not of good intention or rationally sound strategy. It is pure and simple desperation.
The US Federal Reserve has done "what it must" since instituting ZIRP nearly 6 full years ago and through QE's 1-3. Now the ECB will "do what it must" too.
It sure looks like the whole debate about 2015's coming interest rate hikes are another Straw Man stood up to manage market expectations (see Deflationary Straw Man). That debate gives the impression that Policy Central is still in control and that they have decisions to make.
There is no decision folks. The inflationary operation, now gone global, is an all-in, all-or-nothing' proposition.
Greenspan's inflation ended up being less than nothing. It was resolved in a sea of debits that assigned negative value to the system. The ongoing effects of inflation feel good to some people now (especially those who get to lap up the silver spoon's gifts that keep on giving first and foremost as opposed to those savers and paycheck-to-paycheckers who just get to suck on ZIRP-eternity). But inflation is never a lasting benefactor. It is a subtractor over the years and decades as savings and productivity are replaced by money printing.
We will clip this post here and go on managing the market as always, taking what it gives, managing against what it is one day going to take and keep the big picture view in place at all times. That view very simply is that 6 years on from the US financial crisis (ongoing, though that is an unpopular notion at this time) a global cadre of policy makers are playing a transparent game of Whack-a-Mole trying to one-up each other until the whole thing flushes once again.