END_OF_DOCUMENT_TOKEN_TO_BE_REPLACED

Platinum's No.1 use halves to 15% of demand...
PLATINUM hit its highest price since September 2016 on Friday, rising by more than a fifth in US Dollar terms over the last 5 weeks despite gold prices slipping and even while sales of electric vehicles in Europe are overtaking sales of diesel autos, the white precious metal's primary source of demand since the 1970s.
Aided by the falling US currency – now at its cheapest on the forex market since spring 2018, and helping put a lid on the precious metal's gain at 10-month highs for Euro investors and 11-month highs in Sterling terms – platinum prices have soared by 23.2% since the start of November, when major miner Anglo American Platinum (JSE: AMS) announced the closure of key processing plants for rebuild, repairs and maintenance.
With platinum now touching $1082 per ounce in London trade on Friday, fellow industrial precious-metal silver has meantime gone sideways since this time last month, gold has dropped some 3%, and platinum's sister-metal palladium – which finds four-fifths of its end-use in gasoline engine autocats, and which surged to record highs while platinum fell ahead of this year's Covid Crisis – has risen 5.2%. 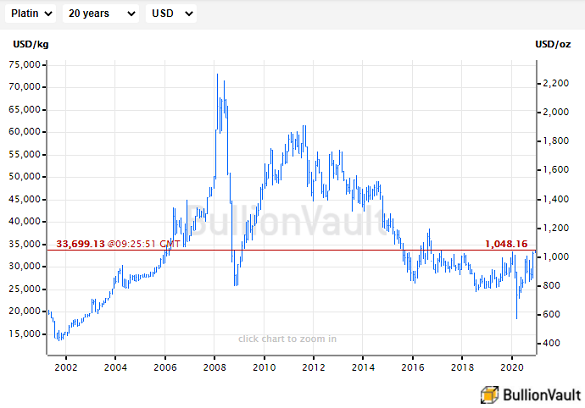 "Registrations for electrified vehicles overtook diesel" for the first time in Europe in September 2020 says auto-market consultancy Jato, with battery electric, plug-in-hybrid and hybrid-electric vehicles accounting for 1-in-4 new cars across the region.
Data from the European Automobile Manufacturers Association concur, saying that in the third quarter of 2020, " almost one in 10 passenger cars sold in the EU was an electrically-chargeable vehicle" with a further 12.4% being hybrids.
"As hybrid cars still contain a combustion engine," notes precious-metals refiner Heraeus, " diesel fared slightly better than the headline implied.
"Nevertheless, the pandemic has certainly exacerbated the decline of diesel in Europe, which is one of the single largest threats to the platinum market."
Used as a catalyst to help reduce toxic and other harmful emissions from diesel engine systems since the mid-1970s, platinum found 34% of its net end-user demand from the auto-sector over the 20 years to 2015.
But that year's "diesel scandal" – starting when German automaker VW was caught cheating emissions tests – spurred a backlash against the dirtier but more energy-efficient fuel which boosted gasoline-engine demand (helping palladium prices surge to a run of new all-time highs) and sent diesel-engine vehicles down from 2011's peak near 60% of all passenger car registrations across Europe to just 25% this autumn.
For platinum, that's taken 2020 autocat demand, net of recycled supply from scrapping older cars, down to just 15% of total net demand worldwide, falling below platinum investment for the first time in at least 45 years.
"Although recent headlines of European countries phasing out internal combustion engine (ICE) cars seem to spell the death of both petrol and diesel," says strategist and platinum-group specialist Jonathan Butler at Japanese conglomerate Mitsubishi, "the reality is that most countries will be dependent on hybrid electric-ICE vehicles for a long time to come.
"These contain similar or higher levels of PGM compared with pure ICEs in order to deal with the lower engine-out temperatures and achieve cold-start catalyst light off."
Going further, "It is electrification...which is most likely the long-term driver of interest in platinum," says Rhona O'Connell, chief analyst at brokerage StoneX, pointing to news that platinum's use as a catalyst for producing electricity in hydrogen fuel cells is gaining mainstream attention.
South Korean auto-giant Hyundai, the world's 2nd largest electric-vehicle brand behind Toyota, last week partnered with UK chemical group Ineos, which already produces 300,000 tons per year of hydrogen as a byproduct of manufacturing chlorine, to popularize fuel-cell electric vehicles.
Hyundai in October shipped the first of 50 hydrogen-powered trucks due for 2020 delivery to customers in Switzerland, and is set to deliver 4,000 such trucks into China by 2025. 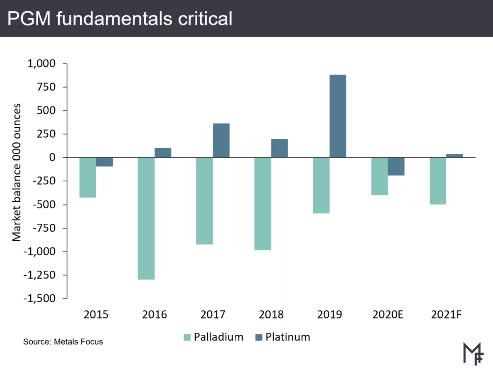 "While platinum in 2020 was tipped into deficit by the pandemic disruption to supply," said Neil Meader, director of gold and silver analysis at specialist consultancy Metals Focus this week, launching their new Precious Metals Investment Focus, "we do have a situation of comfortable above-ground stocks" – a contrast to fellow PGM palladium's continuing tightness.
"So it's highly likely platinum will shift back to a more balanced if not surplus market for 2021."
Looking ahead, Metals Focus predicts an annual average platinum price of $1000 per ounce for 2021, meaning a decline from current spot bullion quotes but some 14% above this year's average thanks to spring 2020's dramatic Covid Crash to the cheapest in 17 years.
That forecast rise in platinum prices also matches the consultancy's forecast for next year's gold prices.
"Maybe the 'hydrogen economy' narrative gathering pace now helps improve platinum's price prospects," says a note from the precious metals team at French investment bank BNP Paribas, "but that also clashes with [how] oil refinery closures could see platinum returned to the market" thanks to the decommissiong of catalysts from distillation plants.
But "while it is true that overcapacity in the oil refining industry will see the return of metal from some previously mothballed sites," says Butler at Mitsubishi's precious metals division, "the oil sector is slowly recovering from this year's price crash and certain regions including the US may start to increase output, provided Opec [the oil producers' cartel] continues to curb supplies into 2021."
More broadly " industrial demand for platinum should see some recovery," Butler adds, "boosted by a jump in economic growth, favourable credit conditions and fiscal largesse" helping boost petrochemical industries from plastics to pharmaceuticals, as well as glass – which also needs platinum for its manufacturing process – plus "healthy" growth in hard disk drives for cloud computing, "greatly aided by record demand for remote networking" during the Great Lockdown.
Stimulus spending on green energy projects, "not least by the incoming Biden administration" in the US, will likely boost 2021 demand for platinum in hydrogen fuel cells and PEM electrolysers to produce hydrogen from water, Butler says, "while the thrifting of iridium in electrolysers – seen as a necessary step to ensure widespread adoption – favours higher aggregate platinum demand in the longer term."
Chinese jewelry demand is also forecast to rise in 2021, marking the first growth since 2013 according to the latest outlook from the mining-industry backed World Platinum Investment Council.
Meantime in autocats, "Increased loadings to meet more stringent emissions levels will benefit the demand for platinum," says the Council.
"So too will the potential for some platinum being used in place of palladium in gasoline autocatalysts and some shift from palladium to platinum in diesel after-treatment systems."
WPIC expects this substitution in gasoline engines "mainly in China and North America in 2021" thanks to the price of palladium continuing to cost over $1,000 per ounce above platinum, "maintaining a high incentive for substitution, particularly as automaker profits suffer from lower sales."