END_OF_DOCUMENT_TOKEN_TO_BE_REPLACED

Near-10,000 tonne gap in silver, investing beats autocats in platinum...
RECORD investment in silver and platinum has rescued both precious metals from a heavy surplus of supply over demand in 2020, taking them instead into steep market deficits as the Covid Crisis spurred only the second global recession since the Second World War.
New data from specialist consultants Metals Focus, published this week by The Silver Institute, show that investing in silver has accounted more than half of total net demand for the metal this year on BullionVault's analysis.
Investing in platinum – whether through small bars, coins, metal-backed ETF trust funds or direct ownership of securely stored ingots – has meantime accounted for more than a quarter of that white metal's net global demand according to Metals Focus' work for the World Platinum Investment Council.
Productive use has sunk in contrast, falling to 4- and 11-year lows respectively while jewelry demand also plunged amid the steepest collapse in global economic activity since 1945, down 6.2% per capita on World Bank estimates.
For platinum, this has meant that investing demand – net of investor selling – will for the first time on records stretching back to 1975 have overtaken demand from auto makers needing the metal for catalysts to reduce harmful emissions from diesel engine vehicles.
Prior to 2020, autocats consistently represented the largest single use of platinum – an 'industrial' precious metal – since the devices were first widely installed in diesel passenger vehicles in the mid-1980s. 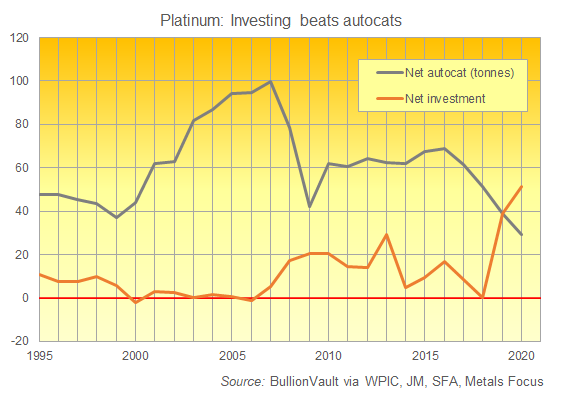 Net of autocat recovery from scrapping older cars – recycling which would have set a record in 2020 if not for last year's jump – the new data puts 2020's automotive demand for platinum at the weakest since 1985.
Yet "the platinum market is now projected to be in a significant deficit this year," says the World Platinum Investment Council, reporting Metals Focus' forecast of a record annual gap between supply and demand of 37.4 tonnes worldwide.
"The combination of supply losses due to pandemic-driven mine closures, ongoing South African processing disruption, and strong investment demand more than offsets lower Covid-19-impacted automotive, jewellery and industrial demand."
While platinum investing has jumped to a record 27.7% of the white metal's total net demand in 2020, investing in silver has leapt further still, reaching a modern record of 53.3% on BullionVault's analysis.
Those figures read 5.3% and 13.3% respectively over the previous 25 years, with silver investment seeing net outflows around the turn of the millennium as China sold off the bulk of its remaining official-sector stockpiles, not needed for monetary purposes since it abandoned its Silver Standard in 1935. 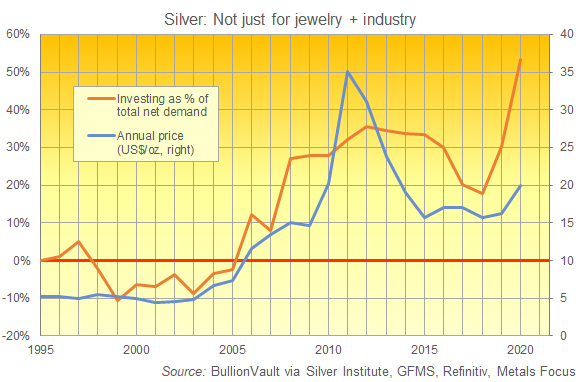 "[2020's surge in silver investing] reflects the impact of increased price volatility and healthy price expectations," says The Silver Institute, releasing Metals Focus' data earlier this week.
But with jewelry demand down by almost a quarter and silverware by one-third – led by weak household incomes in the key consumer market of India – "Industrial fabrication is forecast to drop by 9%...to a five-year low."
The fall in silver's industrial use "reflects the impact of lockdown restrictions," says The Silver Institute, "with supply chains heavily disrupted, end-users adopting an increasingly cautious approach to inventory replenishment, and factories facing labor supply problems. "
On the supply side of the silver market meantime, mining and scrap flows in 2020 have fallen below 30,000 tonnes for the first time since growing through that level a decade ago on Metals Focus' latest estimates.
So while demand to buy silver outside of investment fell to its lowest since at least 1995, the surge in coin, bar and most especially ETF investing led to a record deficit of nearly more than 9,906 tonnes.
"In terms of...key end-use industrial segments, Metals Focus estimates that photovoltaic demand will fall by 11%," says The Silver Institute of the solar-energy industry. "Even so, this remains a historically high total."
So-called 'green' technologies are also set to boost productive demand for platinum says WPIC, forecasting that "stationary fuel-cell systems and green hydrogen electrolysis capacity" – both needing platinum catalysts – "are likely to start achieving some momentum towards the end of 2021."
Banning the sale of new diesel or gasoline-engine cars from 2030 this week, the UK Government's new 10-point plan for a "Green Industrial Revolution" puts 'Offshore wind' top of its list, followed by 'Hydrogen'.
Platinum prices have this week seen "stellar" performance according to one trading desk as other precious metals have struggled amid repeated news of Covid vaccine breakthroughs, touching 9-week highs above $940 per ounce – still flat from January, and a little over 1/10th below January's pre-Covid Crash peak, then its highest price in 3 years.
Sister PGM metal palladium – which finds 80% of its current end-use in gasoline engine catalysts – has meantime rallied only to 1-week highs at $2355 per ounce, down by almost one-fifth from February's pre-Covid Crash record.
Trading below palladium since mid-2018 for only the 2nd time in modern history, platinum has found some 40% of its modern demand from diesel autocats.
Metals Focus' estimates for the World Platinum Investment Council now forecast a strong rebound in platinum's industrial use in 2021.