END_OF_DOCUMENT_TOKEN_TO_BE_REPLACED

PLATINUM is a precious metal. It's mentioned in the same breath as gold, silver and diamonds, writes MoneyWeek's executive editor John Stepek in his Money Morning email.

But it's become rather less precious in recent years.

Will its fortunes ever change? 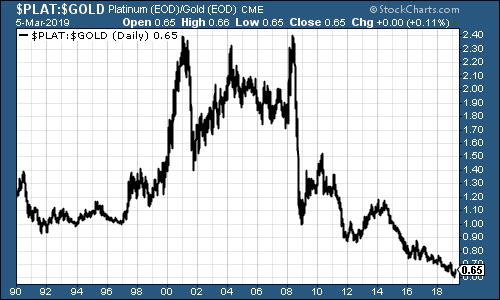 I mean, come on! Everyone knows that platinum is better than gold. You want a platinum credit card, not a gold one. You want your album to go platinum, not gold.

At its peak, platinum was more than twice the price of gold. And until the current decade, even at its depths, it had rarely sunk below the gold price.

Yet today, gold is trading at a higher premium to platinum than we've seen in most people's investing lifetimes.

Surely it's a raging buy?

Maybe it is, maybe it isn't – we'll get on to that in a moment. But if it is, it's not got anything to do with the platinum-to-gold ratio.

It's easy to get fooled by patterns in markets. Human beings are pattern-spotting machines. We can't help ourselves; it's an exceptionally useful evolutionary adaptation. But like all such adaptations, there are some circumstances in which it can be downright unhelpful. Investing is one of them.

(I talk about this a lot more in my book, The Sceptical Investor, which is all about contrarian investing.)

These patterns can be very useful. But relationships change. And what was once a valid view can become completely irrelevant.

The real problem with the platinum-to-gold ratio is that there's no fundamental reason for there to be a desperately strong relationship between the two metals – there is a correlation, but looking back over a decade, the gold price is more strongly correlated to both copper and oil than it is to platinum.

I'll explain what I mean by that with reference to another precious metal – silver. Here's the gold-to-silver ratio going back to 1990 (the gold price divided by the silver price). 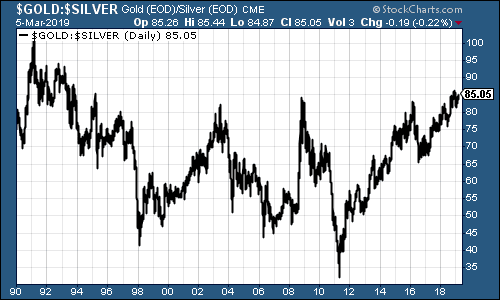 The gold-to-silver ratio can be useful. It's not so much because there's 15 ounces of silver for every ounce of gold (or whatever the exact physical ratio is), which is what the silver enthusiasts tend to harp on about. It's because they are influenced by many of the same factors.

Gold is a monetary metal. The price of gold is virtually all down to how people feel about the financial system and the big picture outlook. Yes, there's a bit of industrial and jewellery demand, but those aspects are simply not that important in driving the price.

Silver is both monetary and industrial. People will buy silver as a hedge against financial concerns. But it's also widely used in industry. So the price is also driven partly by economic growth.

As a result of this common driver – the monetary aspect – it makes a certain amount of sense that gold and silver should trade relatively closely to one another. And they do – the correlation between the two (the extent to which they move together) over the past decade is far higher than for gold and copper, oil or platinum.

As a result, when the ratio between them reaches extremes, it's not unreasonable to expect it to reverse. There's potentially useful information there. (Indeed, looking at the chart above, you'd expect silver to start outperforming gold from here, although that's a story for another day.)

But you can't say the same for the relationship between gold and platinum.

Platinum is not a monetary metal. It's a real asset, yes – if we see hyperinflation or an entire collapse in the banking system, then you would certainly favour an ingot of platinum over a wheelbarrow full of fiat currency – but you could say almost the same for an ingot of copper or a barrel of oil.

If it's the financial system you're worried about, investing in gold or silver is a better way to express that concern.

Platinum is an industrial metal, and it's specifically a car industry metal. So it shares no common drivers with gold, and there's really no reason why platinum should be more expensive than gold. Yes, that's historically been the case. And yes, it is rarer, and it is pretty. But if the secular story behind platinum changes (as it has) then that old relationship can change too.

The reality is that platinum's real rival now is palladium. The palladium price has rocketed even as platinum's has collapsed. The story behind it is well known now. Consumers, in Europe in particular, were conned by governments and car makers into believing that diesel cars were "greener" than petrol cars.

Now, of course, diesel is public enemy number one. Governments are acting as if they never encouraged consumers to swap in the first place, and car makers are maniacally covering up past misdeeds while talking big about launching as many electric car blends as they can.

The palladium price is now near a record, sitting at around $1500 an ounce (you can see how unusual this situation is in the chart below).

At some point – as is always the case with industrial commodities – it will become profitable to substitute palladium for something cheaper. The obvious candidate is platinum.

The tricky thing is knowing when that point will be reached. In the FT yesterday, Henry Sanderson reported that platinum-backed exchange-traded funds have seen a big surge of interest this year – holdings are now at a four-year high. Clearly, investors have noted the massive valuation gap.

Criminals are now pinching catalytic converters (at least, according to an anecdote from John Gapper in the FT earlier this year) in order to get hold of the palladium.

And according to Trevor Raymond of the World Platinum Investment Council, "just a 5% substitution would mean a 14% increase in platinum demand from the automotive segment." There are also suggestions that demand for fuel-cell vehicles in China could help the platinum price.

Here's the reality: you can't know when these things will change. Perhaps when we start seeing "platinum" demoted in popular culture (so your platinum credit card is replaced with a diamond one, or maybe even a palladium one), then you'll know it's turnaround time.

But prices create change. And right now, platinum looks cheap. So my suggestion would be to buy some, but to buy it in a way that means you can hold onto it for the long run.