END_OF_DOCUMENT_TOKEN_TO_BE_REPLACED

Flaming the plague with the Fed's ultimate bazooka...
The PLAGUE will pass, writes Bill Bonner in his Diary of a Rogue Economist, reporting from San Martin in the back-of-beyond, Argentina.
The most recent reports show the virus may be losing its deadly oomph. Since April 4, the death count outside of New York is down, not up.
And here's another interesting piece of the puzzle...
According to the National Center for Health Statistics, deaths from pneumonia this year are running about 1,000 per week fewer than usual.
Most likely, normal, seasonal pneumonia deaths are being counted as Covid-19 virus fatalities...making the newcomer seem worse than it really is.
Nine states – and several foreign countries – continue to resist the "lock 'em up" approach to fighting the disease.
So far, they seem to be suffering no more fatalities than the others. We'll see how it turns out for them.
But the hype against the virus is looking less and less like real science...and more and more like another one of the feds' fake wars.
We have no information you don't have, Dear Reader...maybe less. We claim no expertise in the matter, either. Still, our guess is that the bug will prove less of a threat than the media and the government now project.
But while the natural calamity runs out of gas, the manmade one gets a tankful...
Hardly a day goes by that some jackass-du-jour doesn't recommend something really stupid.
Yesterday, for example, you could hardly sneeze in the Capitol building without infecting half a dozen knuckleheads, each with a plan to waste the public's money.
The US deficit is already rising to 13% of GDP, a new record. But the pols want more.
ABC reports:

"House Speaker Nancy Pelosi and Senate Minority Leader Chuck Schumer on Wednesday called for half a trillion Dollars in additional financial aid to boost local and state governments, small businesses, food stamp recipients and hospitals struggling amid the coronavirus pandemic.
"Their request comes in response to the Trump administration's call for more than $250 billion to help ailing small businesses."

Meanwhile, the Federal Reserve let it be known that (fake) money was no object. It will do whatever it takes to protect Wall Street's speculators.
Its balance sheet (roughly America's monetary base) already approaches $6 trillion. By the end of the year it is expected to be $10 trillion...or half of US GDP.
And economics advisor Larry Kudlow is now talking about putting into service the Fed's "ultimate bazooka". Word on the street is that what he has in mind is getting the Fed to buy stocks.
The idea of it must have sent hearts a-tingling yesterday on Wall Street. Investors bought, driving up the Dow more than 700 points.
The fix is not exactly in. But it's close enough, investors figure. If the Fed puts its shoulder to raising stock prices, stock prices must rise.
Investors aren't wrong, necessarily. But floating up stock prices with a flood of fake money is not without its hazards.
Typically, the economy drowns. You end up with less output and more money.
Then, consumer prices move up along with stock prices. And in the long run – which can happen faster than we expect – the rise in consumer prices outpaces the rise in capital prices.
In other words, sooner or later, the real prices for stocks come to reflect the real value of those companies. And in an economy suffering from high rates of inflation, it's hard for companies to maintain profit margins. Values go down, not up.
In the meantime, it rained in the mountains over the weekend. The water rose in the river.
"Great," said Elizabeth, "we're cut off again."
As it turned out, we were more cut off than we realized.
"Don't try to walk across the footbridge," Sergio, our farm manager, reported. "One of the support cables must have been rusty. It snapped. The bridge is kinda swinging..."
There's something charming about being isolated. The long days...quiet...without interruption...
Time to notice the sweep of the wind over the alfalfa fields. Time to watch the hummingbirds visit flowers in the courtyard...and swat flies in the office. Time to notice as the mountains change color, depending on how the sun hits them.
Time to get annoyed about nothing ( The New York Times reports that cases of assault and battery are rising at home). Time to remember. And time to forget what you were trying to remember.
Time...time...time...
We live between two geological epochs, separated by millions of years.
One is old, worn out...wrinkly...craggy...and made cynical by time. The other is still young, with muscles bulging...vigorous...robust...and still trying to catch the clouds as they go by.
On this side of the river, there are low hills...worn down over the millennia...and then, in the distance, a grim mountain wall.
In the morning, with the sun behind it, the wall is purple. In the late afternoon, it is almost white...shining...like an impregnable fortress.
This is described as a "Cretaceous-Paleogene" area on the geology charts, and includes the "Yacoraite Formation".
The other side of the river is described as "Proterozoic superior-Paleozoic inferior". It's part of the "Mesozoic-Tertiary synorogenic belt" as near as we can tell.
We don't know what that means, either. But we take it that they are products of two separate events that happened long ago.
To the east, the mountains are stripped to barren rocks and piles of sedimentary hills. To the west, at only 6 million years old, they are untamed and untutored.
And here we are, between them...certainly not young, but not yet worn down to sand and dust.
Here, we are like monks with bed, book, and candle, enjoying the ennui of having nowhere to go and nothing to do.
Up at 6am. To bed at 10pm. No TV. No Netflix. No radio. No newspapers. Breakfast at 8am, tea at 11am., lunch at 1pm, and dinner at 7pm.
And what a delight! Sergio brought a dozen Argentine croissants – medialunas – from a bakery in Salta. We will have two each day...lasting almost a week.
And so do we measure out our lives in coffee spoons, medialunas, and bottles of Malbec.
After a week, the medialunas are gone, and there are five or six "dead soldiers" under the sink.
But there is always something that catches our attention here...things we wouldn't have noticed in the pre-confinement days...
For example, the sun rises over the Eastern mountains at 7:25am...and by 7pm., it is behind the mountains to the West. In between, it shines benevolently over the valley...and warms everybody in it.
The valley is scarcely half a mile across at the flat bottomland. The Nevado de Cachi – the tallest of the mountains on the west side of the river – watches over the valley.
The Nevado rises to almost 21,000 feet and is covered in snow all year round. 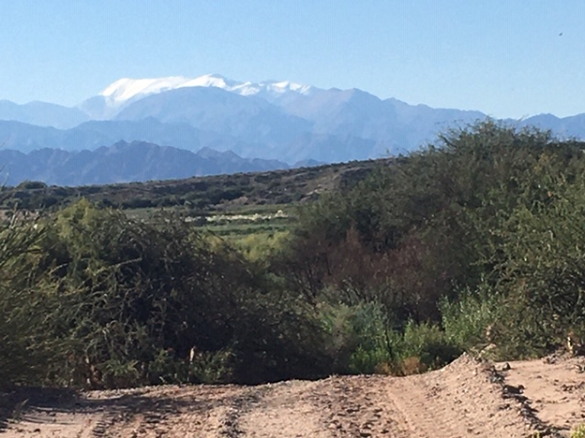 In the morning, it is the first to catch the sunlight. In the evening, it is the last to let it go.
Like an ancient bell in an Italian village, it tolls morning and evening.
It lights up, even before the sun has risen, telling us it is time to get to work. All day long it shines. Then, when the peak goes dark, the heat and passions of the day are gone...and it is time to rest.