END_OF_DOCUMENT_TOKEN_TO_BE_REPLACED

'Cyclical drop' due in gold mining, AI technology coming...
GOLD MINING output will struggle to record a 10th consecutive year of growth in 2018 according to leading analysts, marking instead the start of a cyclical if not sustained drop from this decade's new all-time peak.
Global gold mining production may stand "at a tipping point," say specialists Metals Focus, "between continued growth and long-term decline."
Better data analysis and increased automation should boost efficiency, "allowing lower grade ore to be mined profitably," it says.
But if the industry doesn't face 'peak gold' – a theory built on M.King Hubbert's forecast that US oil output would start a relentless decline from 1970 – "We expect a cyclical peak in [gold] mine production in 2018," say fellow analysts Thomson Reuters GFMS, "before slowing down over the near term."
US oil output in late- 2017 returned to its 1970 peak, doubling from the lows of 2008 thanks to new technologies for extracting and processing oil from shale rock.
"On the positive side," reports Metals Focus, "in 2017 the global industry managed to replace more gold in reserves than was mined, indicating that the production outlook may improve."
Capital expenditure is also recovering from the 2011-2015 slump in gold prices, with the rally in bullion encouraging new mining investment. "The project pipeline is looking strong," says Metals Focus, "especially among the small and mid-tier miners."
But against that, new exploration "has failed to discover large ore bodies in significant numbers," the consultancy goes on, and so the world's major gold mining companies are forecasting a slight fall in their output over the next few years.
"It also seems likely that the environmental constraints affecting China" – the No.1 producer nation since 2007 – "will not be reversed and production levels there may not recover, at least in the short-term," Metals Focus adds. 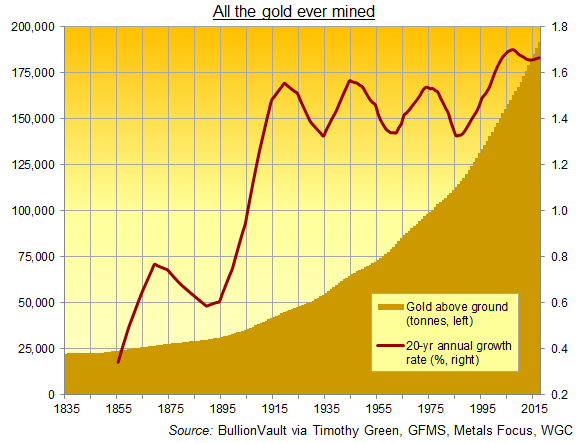 Best estimates suggest that the total above-ground stock of gold has doubled over the past 45 years, swelling by 18% in the last decade alone to reach more than 190,000 tonnes at the end of 2017.
If accurate, that estimate says the above-ground stock of gold weighs slightly less than the world's current hourly output of crude steel.
The mid-to-late 19th Century boom in global gold production saw a series of 'gold rush' discoveries – in California, Australia, South Africa, eastern Russia and the north-eastern United States. They came alongside technological breakthroughs including Alfred Nobel's invention of dynamite, the patenting of the Miller process for isolating gold from other elements using chlorine gas (both 1867), and then the cyanidation process patented between 1887 and 1888 by Scottish chemists John Stewart MacArthur and the Forrest brothers.
First used commercially at New Zealand's Crown Mine in 1889, cyanidaton revolutionized the economics of mining the giant Witwatersrand Basin around Johannesburg. Together with the Victorian era's other gold rush finds, "The economic consequences of these discoveries were dramatic," according to one academic history of the late 19th Century boom, because "the increase in gold production paved the way for a currency revolution of international dimensions" – the global Gold Standard monetary system ruling from 1870 to the start of the First World War in 1914.
The boom also saw national central banks buy gold and hoard it at an unprecedented rate.
The more recent surge in global gold mine output came after "the 1980s produced more technical developments in gold extraction than any other period since the development of cyanidation," says the 2006 edition of leading industry resource, The Chemistry of Gold Extraction. Most notably it cites 'carbon in pulp' and 'carbon in leach' – chemical techniques which boost the yield from cyanidation by adding activated carbon.
First patented in 1973, CIP was from 1981-84 introduced at 11 plants in South Africa, with many other sites using the method in the United States and Australia. More economical again, improved techniques for 'heap leaching' also extended the move towards open-pit mining, enabling producers to work lower-grade ore found nearer the surface.
Looking ahead from 2018 however, "Open pit mining will become increasingly unpalatable to local communities and central governments," reckons Michelle Ash, Chief Innovation Officer at the world's largest gold mining corporation, Barrick (NYSE:ABX). Environmental concerns over waste dumps from gold mining – known as tailing stands – "will clearly accelerate the shift towards underground mining," Ash goes on, writing this spring for the mining industry-backed World Gold Council.
That trend will come alongside "the rise of automation, artificial intelligence (AI) and better sensing technology...[plus] smaller tunnels, more compact equipment, and the complete removal of people from below ground."
Already using computer software to predict and identify geological fault zones (paleostress mapping) the gold-mining industry is now using AI to crunch data from geosurveys and drilling reports, such as the Red Lake project in northwest Ontario, Canada belonging to No.4 listed producer Goldcorp Inc. (NYSE:GG).
In contrast to Metals Focus, GFMS puts global gold mining output down 5 tonnes last year from 2016's record peak, saying in their Gold Survey 2018 report that the drop was "driven by environmental concerns in China...a crackdown on illegal mining in Indonesia...[and] Peru and Colombia, where police and military interventions to flush out illegal miners from key areas in the rainforest region led to a drop in output."
Stronger production in the United States came from new projects – supported by President Donald Trump's move to reduce environmental regulation – while Russia gold mining output grew some 7%.
Already the third largest behind China and Australia, Russia's annual gold output will swell by one-half by 2025 and nearly double from current levels by 2030 according to Mikhail Leskov, deputy director general of Moscow's Institute of Geotechnology.
But "in general the world's production is on the verge of a sharp decline," says mining analyst Andrey Lobazov at Russian stockbrokers Aton, also speaking to the Vedomosti newspaper in May, "due to the development of previously proven reserves and the lack of new discoveries."
Global gold-mine discoveries reached their peak in the early 1980s according to data from specialists MinEx Consulting, and the rate of new finds has failed to recover despite a strong rise in exploration budgets over the last 15 years.
"The future pipeline is [now] almost devoid of 'world class' projects," says Metals Focus' head of mine-supply analysis Mark Fellows. Looking at the industry's next 30 years for the World Gold Council's recent Gold 2048 report, "gold production [must either] be sourced from a greater number of smaller operations, or face a sharp contraction in capacity," Fellows says.