END_OF_DOCUMENT_TOKEN_TO_BE_REPLACED

So warns the chief of passives...!

WITHOUT Googling it, try to guess who said the following quote, writes Frank Holmes at US Global Investors.

"If everybody indexed, the only word you could use is chaos, catastrophe. The markets would fail."

The speaker, believe it or not, is John Bogle, founder of Vanguard, which has been at the forefront of indexing.

Bogle made the comment last year at the Berkshire Hathaway shareholder meeting, basically admitting that there's a limit to the amount of passive investing the market can handle and still function efficiently.

The thing is, we're testing that limit more and more every day as passive mutual funds and ETFs – those that seek not to "beat the market" but track an index – take up a larger slice of the pie. The share has increased dramatically in the past 10 years, rising from only 15% in 2007 to as much as 35% by the end of 2017. 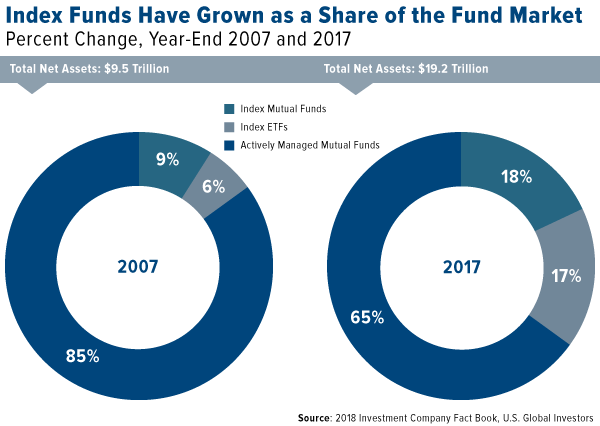 As for when passive investments will overtake the active market, Moody's Investors Service estimates we'll see this happen sometime between 2021 and 2024.

Markets simply wouldn't be able to function without active managers calling the shots – rewarding good corporate governance and punishing the bad – so Bogle's what-if scenario of 100% indexing is, for now, purely hypothetical.

Nevertheless, the seismic shift into indexing has come with some unexpected consequences, including price distortion. New research, which I'll get into below, shows that it has inflated share prices for a number of popular stocks. A lot of trading now is based not on fundamentals but on low fees. These ramifications have only intensified as active managers have increasingly been pushed to the side.

This could end very badly for some investors, as I told CNBC Asia last week. It's possible we could see a correction when it comes time for a number of multibillion-Dollar funds to rebalance at year's end. The same thing happened to the tech bubble in 2000, when everyone rebalanced after a phenomenal run-up in tech stocks.

And remember what happened to small-cap gold stocks last year when the massive VanEck Vectors Junior Gold Miners ETF (GDXJ) was forced to restructure its portfolio? They were knocked down despite having incredible fundamentals.

Take a look at the following chart. Internet commerce stocks – Apple, Amazon and the like – are up nearly eight times since May 2010.

This isn't just the second largest bubble of the past four decades. E-commerce is also vastly overrepresented in equity indices, meaning extraordinary amounts of money are flowing into a very small number of stocks relative to the broader market. Apple alone is featured in almost 210 indices, according to Vincent Deluard, macro strategist at INTL FCStone.

If there's a rush to the exit, in other words, the selloff would cut through a significant swath of index investors unawares. And just as Warren Buffett once said, "Only when the tide goes out do you discover who's been swimming naked."

Deluard's research also suggests that passive index investors could be missing the hidden gems. After analyzing returns in the Russell 3000 Index, he found that stocks that are overrepresented in indices – again, think Apple – have been underperforming those in fewer indices.

Despite lagging for the past five years, stocks that were in 75 indices or fewer returned more than 60% for the 12-month period, while the performance of stocks featured in 200 indices or more was around half that. Over-indexed stocks were also 2.5 times more expensive, Deluard found. 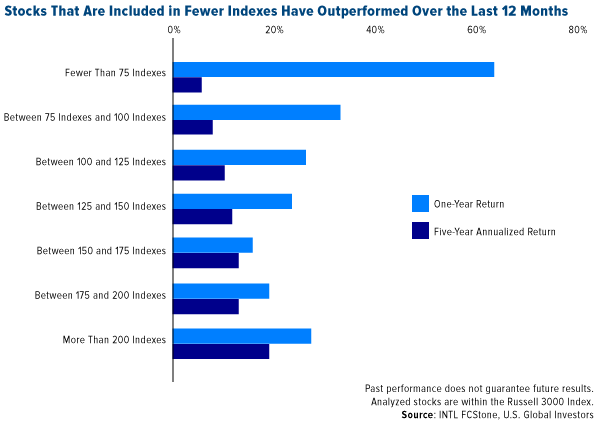 Whether we're dealing with causation or correlation is probably too complex for me to get into here.

But the implication, as I see it, is that there's huge potential for gains in stocks that are least loved by index providers. Talented active managers who are able to uncover these hidden gems and make the appropriate allocations are worth every cent investors pay them in fees.

As I said earlier, a lot of trading now is based not on fundamentals but expense ratios. There's been a race to the bottom to see who can provide the lowest fees. Fidelity appears to be first to introduce a no-fee fund – the catch being the investor must use Fidelity's brokerage firm. Some industry experts now believe it's only a matter of time before we see an index fund with negative fees.

You get what you pay for, as the saying goes, and buying cheap often comes with a high price in the long run. A tummy tuck in Tijuana costs a whole lot less than one in L.A., but you might end up having to pay far more in medical expenses should a mishap occur.

Recently Ray Dalio, billionaire founder of Bridgewater Associates, told CNBC that we're in the "seventh inning" right now, and as such, investors should probably get "more defensive". In addition, the Goldman Bull/Bear Indicator just hit its highest level since 1969.

Investors who feel this bull run might be getting long in the tooth would be prudent to make sure they have their recommended 10% weighting in gold and gold stocks, as well as a position in short-term, tax-free municipal bonds. Both assets have long been sought as safe havens in times of economic uncertainty and have performed well even when markets are down.