END_OF_DOCUMENT_TOKEN_TO_BE_REPLACED

Falling gas prices show how over-capacity is a big problem everywhere...
EVERYWHERE we look we see rivets popping, writes Bill Bonner in his Diary of a Rogue Economist.
The Baltic Dry Index has just put in a new all-time low. The index measures the cost of shipping raw materials over 23 sea routes. 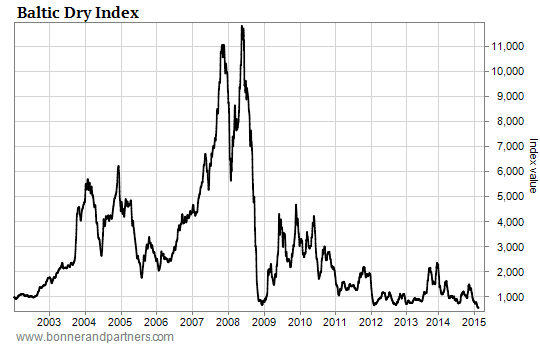 As world trade sinks, so does the index, all other things being equal. Which, of course, they never are.
But Bank of America Merrill Lynch says global GDP may fall by $2.3 trillion in nominal terms (that is, before adjusting for inflation) this year. To put that in perspective, nominal global GDP has only fallen five times in the last 34 years.
Meanwhile in the US, sales are weak. New building permits are weak. And income growth is weak.
And over in Europe, talks have stalled between Greece and its creditors.
We rate the chances of a "Grexit" at about 50/50 in the short term...and closer to 80/20 in the long term. What that will mean exactly nobody knows...but it's bound to mean something.
Most likely, it will mean an even lower Euro versus the Dollar. And maybe a collapse of Euro-denominated subprime government debt.
The question is: What will the sovereign bonds of Portugal, Spain and Italy be worth after Greece defaults? Won't bondholders start to get nervous that a domino effect may be under way?
The European sovereign debt market is bigger than the US mortgage market. When it cracks, there are sure to be fireworks. Because there are some $26 trillion in derivatives tied to it.
The falling price of crude oil was first thought to be a good thing. Consumers could spend less on gasoline. But a 60% drop in the price of the world's most important commodity can't happen without major disruptions.
A lot of investment decisions had been based on oil selling for over $75 a barrel. Now that it's trading at about $50 a barrel, there's $25 missing from every barrel sold.
That's $25 that isn't being used to drill new wells, hire new roughnecks, buy pickup trucks or rent office space in Houston.
Speaking of which, one-sixth of America's new office space is under construction in the Houston area...and prospective tenants are becoming hard to find.
They might even become scarcer if Citigroup's new forecast for oil turns out to be correct. It sees the price of oil falling as low as $20 a barrel this year:

"The oil market should bottom sometime between the end of Q1 and beginning of Q2 at a significantly lower price level in the $40 range – after which markets should start to balance, first with an end to inventory builds and later on with a period of sustained inventory draws.
"It's impossible to call a bottom point, which could, as a result of oversupply and the economics of storage, fall well below $40 a barrel for WTI, perhaps as low as the $20 range for a while."

What would happen if oil fell to $20? We don't know. But already 90 rigs are closing every month. There are bound to be consequences – seen and unseen – of a further drop in the oil price. And they're not all going to be good.
Overbuilding is a minor problem in the US. In China, it is huge. It is Houston times 100.
Since 2008, China has increased its money supply by more than threefold. And much of this new money helped fuel a real estate boom in China's tier-one cities.
Now, the property sector accounts for one-quarter of the Chinese economy, according to Moody's Analytics.
When that bubble bursts, at lot of folks who issued mortgage credit will get hurt too.
Another big seam is coming loose in the currency markets. At the end of last year, the US passed the baton of money creation to the Japanese, Chinese and Europeans.
In a free-floating currency world, this has pushed up the exchange rate of the US Dollar to levels that are causing stress and strain on the entire system.
Here again, the first reports of a rising Dollar were greeted with good cheer, at least in the US. Americans thought they had won the World Cup.
But wait...There's someone on the other side of every transaction.
For most of the world, a higher Dollar acts like a corporate-tax increase. The Dollar is the world's reserve currency. That means people all over the world need to convert local currency into Dollars to do business. A higher Dollar means higher costs.
For Americans, it is like an export-tax increase. As the exchange value of the Dollar rises, it pinches off America's industrial renaissance.
Along with the decline in shale-oil investment, that will mean fewer jobs in the US, less revenue to US companies, and darkening skies over the Northern Hemisphere.
The greenback is the sun around which other currencies are supposed to orbit. It is the fixed point that determines night from day, winter from summer, profit from loss, solvent from broke.
What happens when the sun begins to wander?
Well, that's what we're beginning to find out.
Expect more volatility ahead.