END_OF_DOCUMENT_TOKEN_TO_BE_REPLACED

The Fed's new move will do little good, and could make things a whole lot worse...

OPERATION TWIST is a plan so dumb you have to have to Ph.D. to believe it will do any good. Quantitative easing was dumb enough. This is dumber, writes Chris Mayer for the Daily Reckoning.

The Federal Reserve will buy $400 billion of long-dated Treasuries, financed by selling bonds with three years to go or less. The idea is to try to drive long-term rates lower, which the Fed thinks will help the mortgage market.

The Fed unveiled its crackpot scheme on Wednesday and the market quickly registered a firm opinion, as you see in the daily chart of the S&P500: 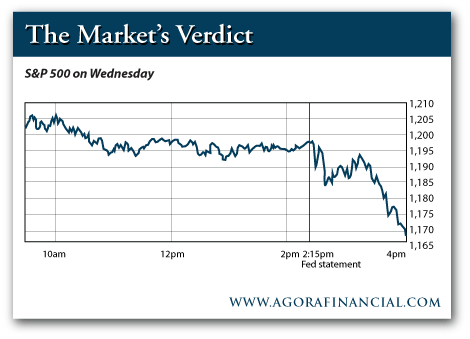 Yesterday was no better, with the stock market ending the day deeply in the red.

Aren't you glad we have the Federal Reserve to run to our rescue? What's the old saying, "with friends like these..."?

The market tanked presumably because of the Federal Reserve's gloomy prognosis for the economy. Housing is "depressed." (Yup, we knew that.) Unemployment will remain "elevated." (Unfortunately, not so for central bankers and their legion of economists). Growth "remains slow." (With the private sector under siege, it's amazing we've done as well as we have.)

Why people still take the Fed's forecasts seriously is beyond me. Here is an organization that has been behind on calling every turn and yet investors still parse Fed statements as if going over the words uttered by a prophet. I can only chalk up such foolishness to a persistent belief in oracles.

But back to Operation Dumber. It won't work. It will make things worse, much worse, than they would've been. Let's look at the handiwork of the Fed's playbook so far.

So far, we've had 33 months of near zero interest rates. And the Fed has purchased $2.3 trillion worth of debt in two rounds of "quantitative easing."

The economy, by the Fed's own admission, is in poor shape. So, as if possessed with a kind of insanity, the Fed says "Let's do more of the same." And hence, Operation Dumber was born. Another $400 billion down the tubes. The economy won't go anywhere.

First, it's doubtful that lower long-term interest rates will push mortgage rates much lower. Mortgage rates have not fallen in step with the ten-year treasury as it often does. Investors are drawing a line. You have to remember, to make a mortgage, someone has to be willing to hold the paper. The market is saying that 3-4% is about the floor.

Think of it this way: If the Fed could drop interest rates to zero, do you think mortgage rates would follow? There has to be some profit for the lender, some incentive for the investor.

Second, I don't think lower rates will help much, because much of the US mortgage market is in trouble.

Five years into the housing meltdown, 28% of US mortgages are underwater. That is, the amount owed is more than the home is worth. About 7% are delinquent, and 10% have been foreclosed on. That's 45% of the country's mortgages in some state of trouble.

So, low interest rates are not going to help the mortgages that are underwater. Those people can't refinance. They need to put more money in their homes or they need to walk away and let the bank deal with the problem. Ditto the rest of the troubled mortgage market.

This is, of course, the market's solution, which government people and debtors abhor. They'd rather take it out of the savers and the old people. Yeah, let's stiff grandma. She's trying to live off her life's savings by putting her money in bank CDs to earn next to nothing. Let's make it tougher on her.

People are so eager to talk about the good of low interest rates, they forget about the bad. But the consequences are wide-reaching. Besides making it tough on savers, a climate of low-interest rates will force people to take greater risks in an effort to make something on their money.

Artificially low interest rates also send false signals to markets. It distorts pricing patterns and so will bring about a lot of mistakes that will only become apparent later. (Think housing, where artificially inflated housing prices and easy money led to a huge but phony boom in housing, the extent of which we see clearly now and are still suffering from).

What about the banks? The initial read in the papers is that this will be bad for banks. It will make lending less profitable by squeezing the difference between long-term and short-term rates — a source of bank profits.

But, thinking about it differently, Operation Dumber is just another gift for the banks. QB Partners' Paul Brodsky and Lee Quaintance wrote in a letter to shareholders yesterday: "This is a move to help recapitalize banks under the guise of supporting the housing market... This is all about the banks income statements."

Regardless of all that, it seems clear to me that Operation Dumber will have little positive effect on the economy. At some point, we will learn that the only way out of this economic morass is to face the painful, yet common sense adjustments, needed. It's really simple. People need to save more money, pay down debts and spend less. The nation needs to get its financial house in order. The mistakes of the prior boom need to be liquidated.

If the Feds and the government would get out of the way, we'd have a quick recession and get on with life. Instead, here we are: nearly 5 years after the bubble popped, 33 months of zero interest policy and trillions of Dollars of wasted government "stimulus" spending and Fed money printing — and still suffering from high unemployment and little economic growth.

As investors, you stand pat. Or you use the opportunity to pick-up a few things. As I've said before, the time to prepare for times like now is before they happen. I don't know what the market will do from here. No one does.

Discover how to cut the cost of Buying Gold...