END_OF_DOCUMENT_TOKEN_TO_BE_REPLACED

It's one thing to say you want to raise production. Actually achieving it is another...

ON WEDNESDAY, OPEC gathers for one of it occasional price-fix…er, production quota meetings in Vienna, Austria. As always, the after party will ensue, writes Addison Wiggin in the Daily Reckoning.

But for a bunch of people who supposedly hold the world economy by the short and curlies…we can't help but notice the ministers are looking decidedly feeble these days.

As a consequence, the bickering – in Arabic, Farsi, Spanish, Portuguese and English – is liable to be more heated than usual this time around.

For starters, some of OPEC's member nations are supporting a military campaign against another member nation. Kuwait, Qatar and the United Arab Emirates back the rebels trying to dislodge Libya's Col. Gaddafi from power.

True, OPEC has been through this before… with Saddam Hussein 20 years ago. But it's a lot harder for 12 guys in a room to reach a decision when three of them have bosses who are scheming to overthrow or even kill the boss of another. Just sayin'…

OPEC's two key movers, Saudi Arabia and Iran, are also bitter enemies. That said, they appear to be in agreement this time on one essential issue: They think it's time to bring more oil onto the market by boosting OPEC's production quotas.

They've sat unchanged since they were lowered in December 2008 – when oil prices had crashed to $32 a barrel and it looked as if nuclear winter was descending over the world economy.

"OPEC is trying to compensate part of the shortage of supply of crude and create a balance in the market," Iran's OPEC governor Mohammad Ali Khatibi said recently. Usually, the Iranians are in the lead pushing for higher prices.

It's one thing for OPEC ministers to say they want to boost production. It's another to actually pull it off. This brings us back to an issue we've examined before – "spare capacity."

Spare capacity is the ability of oil producers to jump-start new production within one month and keep it going for three months. Right now, there's not much of it…

Officially, Saudi "spare capacity" is estimated at 2.5-3 million barrels a day. In a world that burns 89.2 million barrels per day, that's not much. When you consider most of that spare capacity is heavy crude – the viscous variety that's a challenge for many refineries to handle, it seems like even less.

Those numbers get all the more alarming in light of a Morgan Stanley estimate of worldwide spare capacity that we shared on March 4. 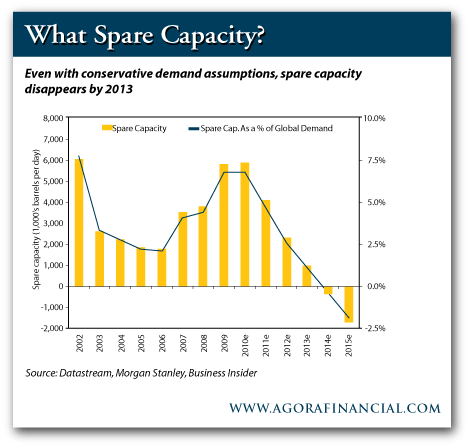 Trouble is, if spare capacity is all up to the Saudis now, and the most they can do is 3 million barrels a day, the chart is already out of date. Spare capacity could be gone even before Morgan Stanley's estimate of 2013. Even if the bank's estimates are right, the world is going to need some energy assistance very soon.

Looking to preserve your wealth by Buying Gold?...