END_OF_DOCUMENT_TOKEN_TO_BE_REPLACED

Why we are not seeing the dawn of new energy security for the West...

OPEC currently supplies the world with 43% of its oil. The rest is supplied by Non-OPEC producers. One of the most important distinctions between the two is that OPEC oil largely comes from state-run oil companies, writes Gregor Macdonald.

What has surprised the global oil market over the past 7 years is that this majority segment of world oil production has also remained trapped below a ceiling, despite the price revolution which took oil from under $40 to above $100 a barrel. Free markets are supposed to create more supply, when price rises. New supply has indeed come online in Non-OPEC over the past decade. However, geology has trumped investment. It is geology that determines flow rates. 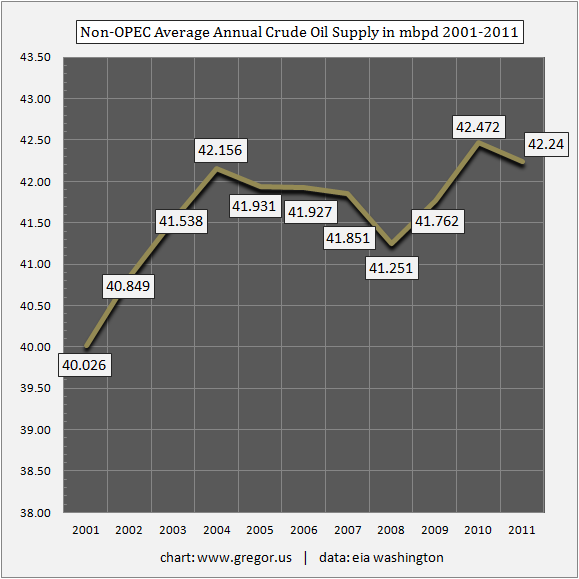 Among the current and popular themes being trotted out about new supplies of shale oil, or even US energy independence, is the view that geo-political power itself is swinging back to the West, and away from OPEC. It is indeed so very difficult to locate the rationale behind this thesis. If the intent is to assert North American natural gas resources provide such a shift, that's more understandable. But given that Non-OPEC's largest oil producer now is Russia—which is hardly aligned with London-Washington—it is nigh impossible to identify any swing in power when oil production in the West (ex-Russia) has been decline since 2002.

That hardly makes for a new dawn of "energy-security" in the West, unless one is terribly naive about the timeframe for energy transition. While there is no question that the West has rebounded in its post-2008 energy use into greater use of coal, natural gas, solar, and wind, these changes to the West's energy mix are exceedingly small and exactly what one would expect from a transition that will take, at minimum, two decades.