END_OF_DOCUMENT_TOKEN_TO_BE_REPLACED

MANY MARKET PUNDITS wrote that $40 for a barrel of crude oil was expensive, that $60 crude was unsustainable, and that $80 crude would never happen.

But here we sit watching race above $90, looking like it wants to take out $100. Here at Casey Research, we think it will only continue higher from there.

Sure, crude may decline in the short term, with the surge of summer vacation driving behind us and with refineries reducing their intake of oil as they gear down for annual maintenance. But the sheer practicality of cars will keep them on the road in increasing numbers – in the US, China and anywhere else in the world where people increasingly have the means to buy one – or two, if they can swing it.

Biofuels? A joke. The timeline may add a little flex – mid- to long-term – but the destination is clear: an energy crisis to dwarf the one the United States faced in 1979-80.

On the bright side, what's bad for the country as a whole could be good for you. All you need to do is put your money in the right place. Bunker and undisclosed location are optional. So what's the right place? Let's start with the big picture – the real one.

Short-term events, like rebel uprisings in the oil fields of Nigeria or hurricanes in the Gulf of Mexico, tend to trigger short-term fluctuations in the oil market, while seasonal trends push storage levels of crude and gasoline up and down. The main engine pushing us toward crisis this time around is a different beast altogether.

Simply put, the Earth is running out of that magic combination of oil that is both high quality and cheap to extract.

Twenty years ago, a dozen fields produced a million or more barrels of oil per day. Now there are just four – and one of them, Mexico's Cantarell in the Bay of Campeche, is collapsing.

If the worst-case forecast at PEMEX comes true, Cantarell will soon break below the level of producing a million barrels per day. That would leave the world with just three million-barrel-a-day fields by the end of this year.

Taking the place of these former big producing fields are deposits that are complicated and capital intensive. The tar sands of Alberta, oil shale in America, heavy oil in Venezuela and resources in the Arctic: all have the potential to add significantly to the world oil supply. They also point to the real problem.

It is not a lack of oil that will trigger the next oil crisis; it is a lack of oil production capacity. This is a crucial distinction. Not all crude is created equal and the long lead-time necessary to ramp up production of such reserves prevents them from replacing the shortfall created by dwindling conventional (read: easy and inexpensive to extract) oil supplies.

And you know already that competition to buy that barrel is only going up. China and India are elbowing their way onto the global stage, and bidding for their share of Middle Eastern oil. A supertanker of crude is as popular as a New York taxi at rush hour; everyone is trying to wave it over their way.

We've reached a turning point in terms of the supply-demand fundamentals of crude. Even Chevron's CEO David O'Reilly recently announced, "One thing is clear: the era of easy oil is over."

Will the True Price of Crude Please Stand Up?

Your average economist will tell you that once you correct for inflation, crude prices reached their actual peak in 1980 during the energy crisis spurred by the Iran-Iraq war. From April to July of that year, a barrel of oil sold for US$39.50. Using the government consumer price index (CPI) numbers, that record-high price per per barrel is estimated at between US$90 to US$102 in today's dollars.

But those CPI numbers are highly suspect.

John Williams of Shadow Government Statistics is one of several specialists who independently tracks financial data in an attempt to provide a more honest picture of the economy. Williams recalculates the CPI so that it is more of a continuum with its earlier versions – unlike the government, which fiddles the formula whenever it decides it needs to.

If nothing else, undoing the many changes in the CPI formula over the years allows us to compare apples to apples on price inflation, rather than apples to genetically modified pumpkins.

Track the current CPI the way it was calculated in 1980, and today's inflation rate is about 7% higher than the current "official" CPI statistics. So, rather than inflation running at less than 3% as the government would like us to think, based on Williams' calculations it is really closer to 10%.

Casey Research's chief economist, Bud Conrad, has confirmed with his own calculations that indeed this figure is a much more truthful estimate of where inflation actually is. Using shadow stats, Bud has calculated the oil price history using the 1980 CPI method. It turns out that 1980 barrel of $39.50 crude is the equivalent of over $200 per barrel in today's anemic dollars. 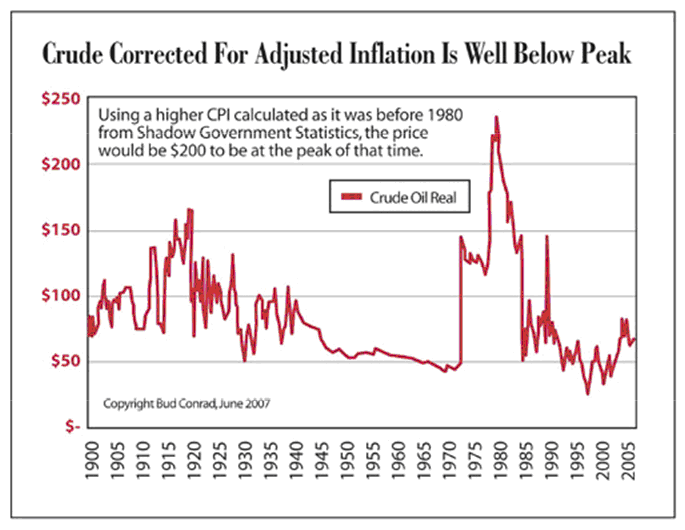 In that context, crude prices are nowhere near their all time high, and $100 oil still looks to be quite cheap. With all that is going on in the Middle East today, where the world still gets much of its oil, and combined with increasingly proof – as per Cantarell – that peak oil is upon us, the odds are better each day that oil is going much, much higher.

Especially given that oil is currently priced in the US Dollar, and the Dollar is headed south in a hurry.

There are other potential shocks to the energy market lurking in the wings. For instance, faced with the depletion of Cantarell, how long do you think the Mexican government will continue to allow the unrestricted export of their country's oil to the U.S.? We could wake up as early as tomorrow to find a quota in place.

Energy Stocks in an Energy Crisis

Another way to view the big picture is to examine the weighting of different sectors within the S&P500 over time. With his background in advanced mathematics, Casey Energy Speculator's chief investment strategist, Marin Katusa, has used this method successfully to assess market dislocations. Simply put, by looking at the relative size of the various components of the S&P 500 vis a vis each other in modern times, you can fairly readily see when certain sectors are significantly out of step with historical norms.

Viewing Marin's chart below, you can see the weighting of the energy sector grew most during the 1979-80 energy crisis, reaching a relative peak of almost 30%. Since that time, energy's share dropped for two decades since. Only recently, as energy prices have rebounded, so we again see the band for energy stocks widening again. Even so, other sectors have increased also, so that while energy stocks occupy a larger proportion of the S&P 500 than they did in 1999, they are still far from its former prominence.

Interestingly, the biggest run has been experienced by the financial sector, which has expanded from 5% to 20% in the last 30 years, catalyzed by the expansion of credit and lax governmental monetary policies. That trend now appears to be reversing. 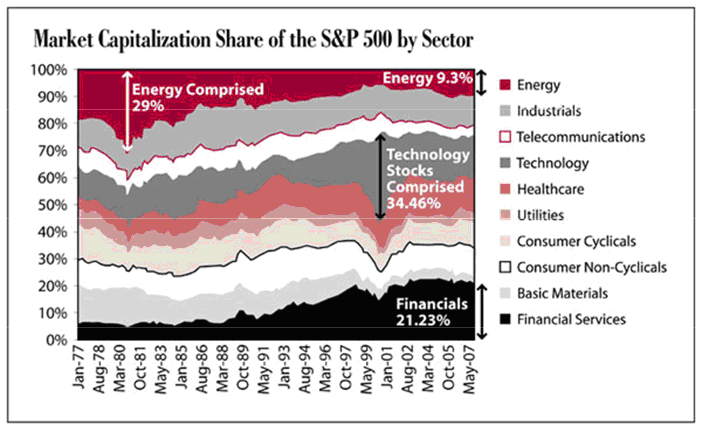 It's also easy to see how the internet bubble distorted the stock market. At that time, tech stocks rose to occupy over one third of the worth of the S&P. During the last energy crisis, the energy sector grew to a similar size. The current weighting of 9.3% demonstrates that energy stocks have yet to make their big run. The bull market has been good to all sectors, with only financials starting to take a hit, but, as the burgeoning energy crisis gains momentum, energy companies could very well regain the status that they held in 1979-80.

It's also worth noting that there is a significant negative correlation between the energy and the financial services sectors. They move in opposite directions 79% of the time: that is, as one increases, the other decreases very nearly four out of five times. Mathematically speaking, that's one robust relationship. With financials reeling from the credit crunch, this technical indicator shows that energy stocks are poised to advance.

Make the Trend Your Friend

As the petroleum age reaches a tipping point, the United States, as the world's largest oil importer, is in an unenviable position. Individual investors need not be similarly disadvantaged, however. The first step to protect your wealth is to see the prices of crude oil and energy stocks in their proper historical context. Ninety dollars per barrel is not a peak price, for example; it is only a precursor of peak oil's influence.

The significant gains we've witnessed in certain energy stocks are nothing compared to the runs we will witness as the next energy crisis comes into full effect. Crude's rise doesn't rely on a new war with Iran, or a rash move from Venezuela's Chavez, although any of these things could speed up the timeline. Crude will move over $100 a barrel, and probably much further, on the basis of simple supply-and-demand fundamentals.

On any pull backs, smart investors should take every chance to position themselves in energy companies that possess a strong growth profile and the other requisites for turning undeveloped fields into profitable ventures. Many of these companies are still trading at a discount to their net present value, and it is these investments that will provide the greatest leverage to energy prices as the next crisis unfolds.

Chris Gilpin is a member of the Casey Research energy team and a contributing editor to the Casey Energy Speculator, a monthly newsletter dedicated to unbiased reporting on rational speculations in the shares of small-cap companies targeting oil, gas, uranium and other energy sources.

Click now to learn more about the Casey Energy Speculator...