END_OF_DOCUMENT_TOKEN_TO_BE_REPLACED

A forecast for what "shale gas" fields mean for US energy prices...

THE PRICE OF OIL is heading to $200 per barrel, writes Marin Katusa, chief energy strategist at Casey Research.

This isn't speculation, but hard fact. Forewarned is forearmed, and with this price expected within the next five years, investors have plenty of time to position themselves.

We recently have been talking about tools that investors can use to navigate the economic landscape. The gold-to-oil ratio is one such tool, but another popular compass is the oil-to-natural gas ratio.

The oil-to-natural gas ratio relates more to nuances within the energy complex, rather than the gold-to-oil ratio, which relates to monetary values. It's the WTI Cushing price of crude oil per barrel to the Henry Hub Spot Price for natural gas per million thermal units.

In theory, based on an energy equivalent basis, crude oil and natural gas prices should have a 6-to-1 ratio. Market characteristics, however, have dictated that since 2006, the price of oil follow a pattern of 8-12 times that of natural gas. And as the chart below shows, historically the oil-to-gas ratio from 1990 to 2008 was in the low 9s. This means one barrel of crude oil was equivalent to about 9,000 cubic units (Mcf) of natural gas.

Improved drilling techniques and access to immense shale gas fields across the country have seen a boom in domestic gas production. Nor can gas wells just be shut down willy-nilly. The complexities of a gas well mean that it takes anywhere between three to six months to shut down operations.

And while the number of rigs sprouting up each year is decreasing, natural gas production is on the rise, with many of the shale wells coming online with their sources fresh and untapped. 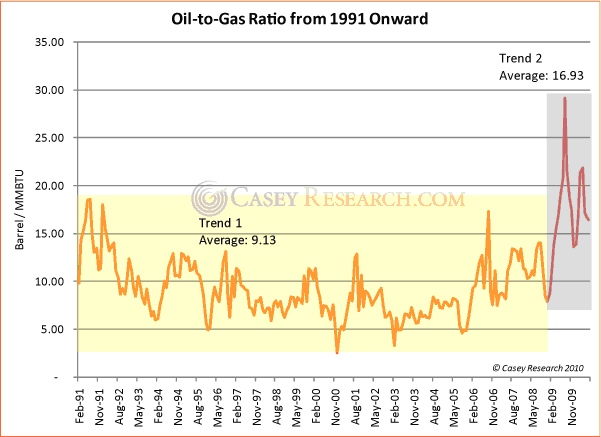 Thanks to this flood of shale gas, the oil-to-gas ratio has risen to almost 17 on average. That is, one barrel of oil is now worth 17 Mcf of natural gas (17,000 cubic feet of gas)!

Some companies and analysts use this disparity to their advantage, using the 6 instead of the 17 value to come up with the "barrels of oil equivalent" conversion for the value of gas. That's a fudge factor of 2.8!

It's an accounting mechanism that's been turned into a completely legal but very shady promotion mechanism, one we watch for carefully.

It's worth knowing that things can change very rapidly in the natural gas market. We do believe, though, that the current trend will continue for years to come, with the oil-to-natural-gas ratio ranging between 15 and 20.

For long-term investors, the oil-to-gas ratio is indicative of a paradigm shift in the markets. It is yet another tool in our collection of crystal balls for the economy and, if read correctly, is a great way to add some valuable holdings to a portfolio.

Got gold? Buy the safest Gold Bullion at the very lowest prices using the award-winning world No.1, BullionVault...