END_OF_DOCUMENT_TOKEN_TO_BE_REPLACED

The majority of the oil we use today was discovered before 1980...

For example, I find Exxon's view that oil will retain its role as the primary energy source — not to be eclipsed by either natural gas or coal — unrealistic. But this is the same view held by IEA and EIA.

Where Exxon is more on track, however, is in their call that growth in global coal consumption rises very strongly through the end of this decade. This is the call I would have expected IEA and EIA to make as well. Because it is coal, not oil, that is steadily growing in supply. And you can't increase consumption of a resource whose supply has been flat for the past six years.

Interestingly, Exxon alludes to the structural reasons behind oil's stalled supply growth in the following graphic: 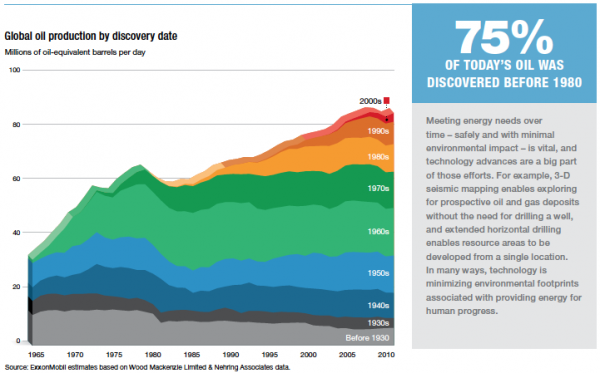 The reason oil cannot possibly avoid losing its grip as the world's primary energy source, to either coal or natural gas, is that the rate of discoveries has slowed down dramatically since 1980.

Moreover, "discoveries" since 1980 have primarily uncovered what I call Slow Oil. Slow Oil, unlike the large deposits of conventional crude — found onshore and brought online quickly — is extracted from complex reservoirs, at great depth, in harsh environments, or comes from unconventional deposits like tar sands. Exxon Mobil writes:

Much attention is paid to new energy technologies, with good reason. But it also is important to know that most of today's liquid fuels come from fields that have been producing for decades. More than 95 percent of the crude oil produced today was discovered before the year 2000. About 75 percent was discovered before 1980.

The common mistake made in journalistic coverage of recent oil discoveries is that these consist of a wholly different tranche of oil, than pre-1980 oil or even pre-2000 oil. This is absolutely the reason why global oil production has been held below a ceiling since 2005. As I have noted before, forecasters who've been predicting for years that global oil production would start to increase again have finally gone quiet, and for good reason.

Buying Gold today? Get the safest gold at the lowest prices with BullionVault...