END_OF_DOCUMENT_TOKEN_TO_BE_REPLACED

What next after production sank...?

JUST over one year ago, with oil prices hitting $43 and falling fast, I suggested that the market was making a big mistake, writes Jody Chudley, financial analyst at The Daily Edge, in Addison Wiggin's Daily Reckoning

My opinion at the time was that oil prices should have been rising, not falling.

The global oil fundamentals were tightening which was a point that the market had completely missed (as evidenced by the falling oil price).

What had happened was that traders were focused on the wrong data point. The market had been misled by stubbornly high US oil inventory data numbers that I believed were being temporarily caused by excessive Saudi oil exports.

Today, oil investors are rightfully focused on the chaos that is taking place on multiple fronts in the Middle East and on how sanctions will impact Iran's production.

However, something even bigger is happening closer to home...

Production from a very significant oil producing nation is imploding and the situation is only getting worse.

Last week, Venezuela's Nicolas Maduro secured himself another six years as president in what was by all accounts a "sham" election.

That is terrible news for the people of Venezuela and for global oil supply.

Under Maduro, Venezuela is in the midst of a full scale humanitarian crisis. The country is faced with hyperinflation at an annualized rate of 15,000%, has just had a $70 billion bond default, can't import basic medical necessities and currently has the military in charge of dispensing food.1

All of this despite Venezuela sitting on the world's largest reserves of crude oil...

However, the Venezuelan oil industry is also in shambles. It is lacking tools, machines and money. With the country literally falling apart, the oil majors have fled. Production is in complete freefall and the situation is only going to get worse with the US imposing sanctions on the country as a result of the Maduro sham election results. 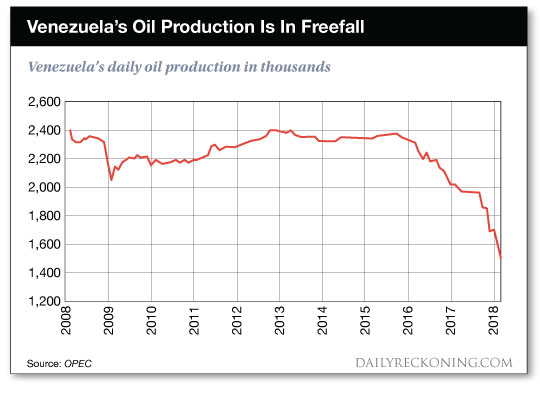 Keep in mind that Venezuela is an important global oil producer. The world needs this country to keep exporting oil.

This is a major global oil producer that is disintegrating at an incredibly rapid pace...

My answer is yes.

And that it could go even higher if Iranian production is hit hard by the sanctions freshly imposed by President Trump.

With Venezuelan production continuing to fall and Iranian production likely doing the same, realistically, the only man who could keep something of a lid on oil prices is the Saudi Crown Prince Mohammed bin Salman.

That would be if he wants to...

Remember this man has a vision for a new Saudi Arabia by 2030 – a country not dependent on oil export revenues. Think about how ambitious that plan is, the man wants to create an entirely new economy in just over a decade.

To have any chance of doing that the Crown Prince needs to milk the Saudi oil cash cow for every penny right now.

Sometime in the next 18 months Saudi Arabia is going to sell a piece of the national oil company (Saudi Aramco) to the public. The Crown Prince only gets one chance to do that and high oil prices would maximize the value received.

The ball is in his court. We will have to wait to see what he does with it, but I think we can all guess what his decision will be...

Here's to looking through the windshield,