END_OF_DOCUMENT_TOKEN_TO_BE_REPLACED

A start on the long, scary road to even thinking about an upturn...

I HAVE a scary story to share. It has to do with US oil stocks, writes Chris Mayer in The Daily Reckoning.

As bad a run as they've had, it could get worse.

"I want to warn the investors here," Jim Chanos began, "whether you are a bear or a bull, I do not recommend that you become a potential purchaser of certain securities in the oil patch in the US."

Chanos, founder of Kynikos, is famous for calling a number of financial disasters, such as Enron and, more recently, Valeant. I've been following Chanos for a long time. His views are always worth considering.

He gave a thoughtful presentation on oil and gas at Grant's Fall Investment Conference at the Plaza Hotel in New York. I want to share some highlights from that talk here.

To get right to the meat of it, most oil producers don't produce any net cash. I'll show you proof in a minute.

Not producing cash is a big problem when you've taken on a pile of debt. Fueled by cheap interest rates, oil producers gorged on debt to fund ambitious drilling plans. Now they can't pay it back.

Not producing cash is also a big problem when you have to spend all the cash you produce just keep production flat. If they stop spending, they'll start shrinking.

And the incentives are all screwed up.

What happens when you consistently spend way more than you make? The end result is that many leading E&Ps are in trouble.

E&P is the handy term to describe firms in the business of exploration and production of oil. I thought this chart below, from Chanos' presentation, was rather eye-opening. 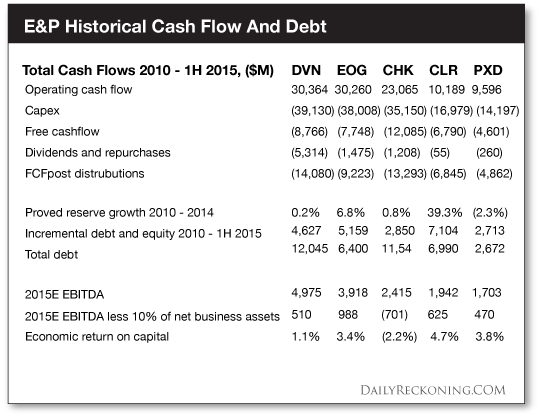 It shows five-year summary results for five of the largest E&Ps. Across the top are the tickers for Devon, EOG Resources, Chesapeake, Continental Resources and Pioneer.

There are a lot of numbers here, but let me point to a few of the most important. First, you can see none of them produced any free cash flow. Whatever cash their operations produced they put right back in the ground (capex).

And even though they produced no cash, they all paid dividends. The way they funded this was take on a lot of debt.

Finally, you can see that "economic return on capital" line at the bottom. Those numbers are abysmal. I've talked a lot about the importance of earning a high return on capital and being to able reinvest and earn those returns again and again.

These oil companies consume a huge amount of cash and produce a poor return on their assets. The oil industry, for the most part, doesn't think about return on capital. They focus on making more and more oil.

Over time, they've weakened their financial strength. There are a couple of old-fashioned ratios that help you see this: the current ratio and the quick ratio.

The higher the better. You want both to be over 1 at a minimum. Ratios over 2 mean you are usually quite comfortable; you can meet your obligations as they come due, with assets to spare. Ratios under 1 can often signal upcoming financial distress. It means, as of that moment, you can't meet your obligations as they come due. You need to sell assets or raise cash or borrow more somehow.

Well, there is a lot bad stuff about to happen to oil producers if these ratios hold true. I want to share another eye-opening chart from Chanos. This shows you many more E&Ps. It also shows you the current and quick ratios, along with a couple of measures Chanos flags as areas of concern. 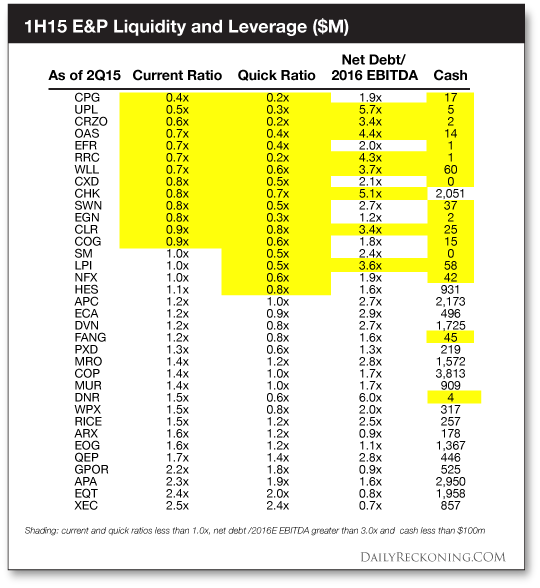 The stocks with shaded areas are the ones with troubling figures. Print this out and check your portfolio against it. Doing so could save you from enduring more losses down the road.

Less dire but still really interesting is to look at are the big oil producers: BP, Chevron, Exxon, Royal Dutch Shell and Total.

They've all spent way more than they've brought in. They've all taken on lots of debt. And they've all – every one of them – seen their returns on capital fall since 2009.

Again, math is math. Investing is ultimately a numbers game. Maybe you can trade these and make some money. But these figures are not a recipe for compounding gains over time. They are signs of firms that are in trouble. Big Oil is self-liquidating.

Cycles in finance take a long time to play out. We had a great boom in the natural resource sector. With the passage of time, it looks more and more like it was a bubble. It's popped, and it's over.

Now begins the process of building a new base for the next bull market. But it will take time. If history is any guide, we'll see more bankruptcies first. Chanos noted that there have been eight oil and gas bankruptcies so far this year, compared with just three in the prior three years combined.

We'll need to see these firms fix their balance sheets. This could be painful for stockholders as these companies tap the market for more funds, selling stock at depressed prices because they have to.

And we'll need to see production come down, too, to firm up the price of oil. US production will probably be up around 6% this year, despite a 59% drop in the rig count. (Again, a lesson in human ingenuity. Don't bet against it.) Though, as Chanos pointed out, it looks like oil production will fall in 2016 by about 4%. It's a start.

I remember when people thought oil and gas and other commodities would protect them against money printing and low interest rates and inflation. What irony it is, then, that the low rates and easy money instead led to the creation of a huge surplus of these commodities. Instead of helping oil prices, they destroyed them.

The scary story is we're not done yet.

If I had to pick a positive way to end this story, I'd say that not all oil and gas firms are so terribly run. However, I'm with Chanos here. I do not recommend you become a purchaser of certain securities in the US oil patch. Too many tricks and not enough treats!