END_OF_DOCUMENT_TOKEN_TO_BE_REPLACED

What price do the big oil-producing nations need to keep pumping...?

WHAT the heck is happening with oil prices? asks Byron King in Bill Bonner's Daily Reckoning, reporting from Pittsburgh, Pennsylvania.

What's going on? How low can oil prices go? Are we looking at the beginning of a major price slide? Is the oil and oil service investment space under a pricing assault?

I doubt it. Here's why: 40% of global oil production comes from places where the national governments cannot afford oil prices to go much lower than they are currently. This chart tells the tale... 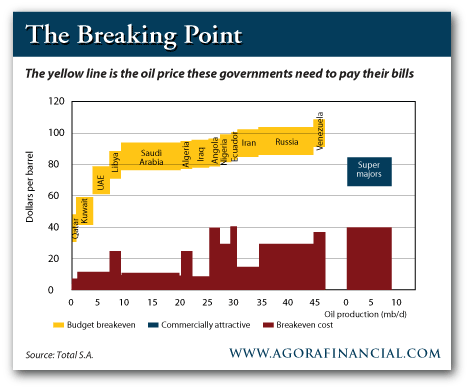 This chart, courtesy of Pierre Sigonney, chief economist of the French oil giant Total SA, describes the oil price level that a series of major producers require in order to balance their national budgets.

The red-shaded region at the bottom is the "breakeven cost" for producers (as estimated by Total). That is, the red shading reflects how much it costs to lift barrels of crude oil out of the ground. As you can see from the chart, many producers lift oil at an overall cost of $10-20 per barrel. Even the major international players (the red bar on the far right) are in the $40 per barrel average for production.

But take a look at that yellow "budget break-even" line. That's the price at which the major petro-players have to sell oil in order to fund their national spending. Keep in mind that all of the countries on the list – from Qatar to Venezuela – rely on oil sales for the vast majority of their national income.

Specifically, Libya, Saudi Arabia, Algeria, Iraq, Angola, Nigeria, Ecuador, Iran, Russia and Venezuela all require oil prices of at least $80-100 (or more) just to have sufficient income to run their national budgets. Without a strong oil price, these countries will have bread lines and riots. West Texas Intermediate at $82 a barrel and Brent hovering under $100 is the threshold of pain for the world's largest oil-producing nations.

Now consider that the 10 countries I just named account for about 35 million barrels of global oil output every day – over 40% of total world crude oil output. (Add in natural gas and gas liquids, and it's even more.) That's 40% of world crude output coming from places where the national governments cannot tolerate a price drop for long. So no...the oil price shouldn't go down much from here.

Still, let's do some devil's advocacy and think it all through. The European economy is on the ropes. Chinese economic activity is decelerating. Japan is in a bizarre, permanent recession. The US economy appears to be stalling, and is possibly slipping back into Recession II.

So yes...there are problems all over the place. We could see precipitous drops in energy demand from many quarters. But if oil prices fall too far, they probably won't stay down for long. The world's largest oil producers cannot afford it, in any sense of the word.

Indeed, an oil price drop will present another re-entry opportunity for investors to pick up more shares of great oil production and/or oil service companies at a relative bargain. Keep in mind that a pullback in share price could also make the dividend yield even more attractive for many oil players.

Between now and the end of the year, I expect to see oil prices firm up gradually, perhaps even violently. We could also see another sharp, upward spike based on all manner of political and technical events.

The consulting firm KPMG recently predicted that oil prices will remain volatile for the rest of the year. There's a chance we could see over $140 per barrel, according to a wide-ranging poll of energy executives by KPMG. The underlying issues are economic uncertainty, geopolitical risk, rising operational costs and regulatory concerns.

Libya is back online, for example. But according to what I've been told, the wartime damage from earlier this year was not properly repaired. Thus Libyan production facilities, pipelines, pumps, etc., are more jury-rigged than not. We could see a sudden drop in Libyan output based on mechanical and engineering issues. And Libya is just one of the ten countries on that chart above.

There is plenty of risk of supply disruptions from the other nine as well. My take? Buy the dips!