END_OF_DOCUMENT_TOKEN_TO_BE_REPLACED

New US sanctions only add to crude uptrend...

With that withdrawal, President Trump vowed that the "highest level" of sanctions would be imposed on Iran.

This is very bullish news for oil.

But before I get to Iran specifically, I want to remind you what has been happening in the oil market over the past year. Because oil inventory levels have been plummeting.

Without a doubt the oil glut that once sank prices below $40 per barrel is now gone. But there is more to the story than that...

For an oil glut to disappear, daily oil consumption must be exceeding daily oil supply.

Globally, I can tell you that oil inventory levels have declined by more 300 million barrels over the past year. That means that daily consumption has exceeded daily supply by almost one million barrels per day.

That is a lot.

Normal inventory levels are quickly becoming below normal. From there we go to shortage.

And remember, this big inventory decrease was without Iran being impacted by President Trump's decision to withdraw from the Iran Nuclear Deal.

At this point we don't have specific details on the sanctions that are coming for Iran. We just have President Trump's assurance that they will be of the "highest level."

To try and estimate what these sanctions might mean for the global oil market, we can look to what happened to Iran's production when the country was previously under sanctions.

For that three plus year period, Iranian production averaged 1 million barrels per day less than where the country has been running in recent months. 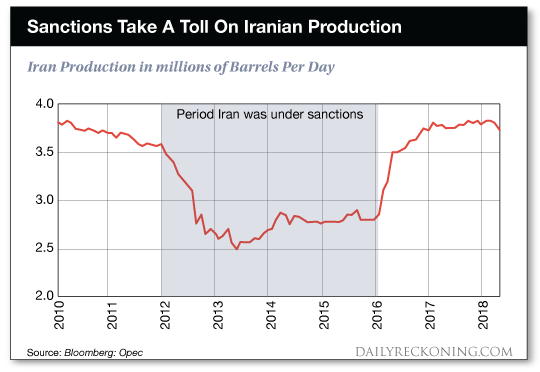 Now the bullish picture for oil is becoming more clear – isn't it?

Global inventory levels have already been falling very quickly due to daily consumption exceeding supply and these Iranian sanctions are only going to exacerbate that situation.

The glut is gone and it looks like we have a supply crunch on our hands.