END_OF_DOCUMENT_TOKEN_TO_BE_REPLACED

THREE months ago, Goldman Sach's analysts warned that the price of crude oil could drop to below $20 per barrel as part of a search for a price level that would bring the dynamic of supply and demand back into balance, writes Gary Dorsch at Global Money Trends.

"With capacity to store oil exhausted in some places, prices may need to drop low enough to halt crude output that can no longer be stockpiled. Once you breach storage capacity, prices have to spike below cash costs because you have to shut in production almost immediately."

"Volatility will surge and we wouldn't be surprised if this market goes into the teens."

Texas Sweet crude oil, the benchmark, traded on the New York Mercantile Exchange was trading near $30 per barrel when Goldman Sachs issued that dire warning. Two days later, oil prices would slump to a 12-year low at $26.50.

However, three months later, in mid-May 2016, Goldman Sachs told the markets that it had flipped its forecast on the crude oil market to "slightly Bullish", but only after the price of Nymex crude oil had already rebounded by about $20 per barrel.

Due to unforeseen supply disruptions, removing about 2 million barrels per day (bpd) from the oil market, the global supply/demand balance had flipped to a deficit sooner than analysts at Goldman Sachs, and also at Morgan Stanley, Barclays Plc, and Bank of America Merrill Lynch, had expected. 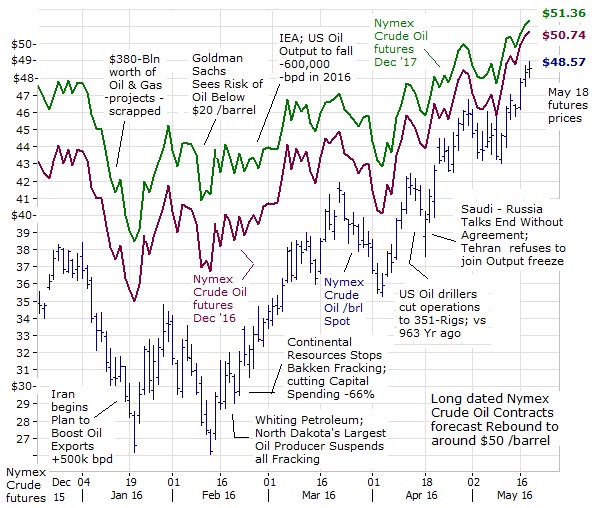 This decline in production, driven by unexpected supply disruptions, combined with sustained demand, has resulted in a "sudden halt" to the output surplus, Goldman analysts wrote in a report dated May 15. Other analysts also noted that supply losses are leading oil prices higher. The unexpected outages caused by everything from wildfires in Canada to pipeline attacks in Nigeria will keep production below demand through the second half of this year.

"The physical re-balancing of the oil market has finally started," Goldman Sachs said. The bank raised its Nymex crude price forecast for the second half of 2016 to $50 per barrel and now sees oil at $60 by the end of 2017. The bank expects global demand to grow by 1.4 million barrels per day <bpd> in 2016, versus 1.2 million predicted previously.

However, a bombshell threat by the Federal Reserve, issued on May 19th – telegraphing a 25 basis-point increase in the federal funds rate to 0.625% at its upcoming June 14th meeting – blocked crude oil's advance at around $49 per barrel, at least temporarily. Tighter Fed policy could give the US Dollar a lift in the foreign currency markets, which in turn, could trigger selling of Dollar-denominated commodities, such as crude oil in the world markets.

In hindsight, investors in the energy markets would've been better off ignoring the "fundamentals" or the causes of the market's movement, and instead should've focused on the price action of the longer dated Nymex oil contracts, such as for December 2016 and Dec '17.

In reality, the price and price action of commodities and the fundamentals are often in conflict with each other. Usually at the beginning of important turning points, the fundamentals do not explain or support what the market seems to be doing. It is at these critical times in the trend that these two approaches seem to differ the most.

Usually they come back into sync at some point, but often when it is too late for the trader to profit. One explanation for these seeming discrepancies is that market price tends to lead the known fundamentals. Stated another way, the market price acts as a leading indicator of the fundamentals and or the conventional wisdom of the moment.

While the known fundamentals have already been discounted and are already "in the market", prices are now reacting to the unknown fundamentals. Some of the most dramatic market movements in history have begun with little or no perceived change in the fundamentals. By the time those changes became known, the new trend was well underway.