END_OF_DOCUMENT_TOKEN_TO_BE_REPLACED

Historical trends might not keep gold's huge outperformance so strong...
IN CASE you were under a rock, oil just got crushed, writes Ryan Fletcher at Montan Capital.
It has dropped close to 50% and most of that was in just the last three months.
Consider if this happened with another resource say if the gold price suddenly dropped 50% from the current price of $1200 per ounce to $600 per ounce in three months, that would get people thinking.
Same for base metals such as copper or even your home. Imagine before you left for vacation, a three month Mediterranean cruise, which you had been planning for years, your house was worth $1.5 million, when you returned it was now worth $750,000.

As an investor and speculator and entrepreneur I have found these last several months fascinating and exciting.
Towards the end of the recent oil equities plunge I was speaking with a friend of mine in Toronto, who is involved with the day to day swings in the market in a trader type role. He had positioned himself for a bounce in the oil equities, but with the drastic drop in prices, I could hear the abject unaltered fear in his voice.
That was my sign. There must be opportunity here. It was the same fear I had seen several weeks earlier in the senior gold space, and remembered from 2008 with regard to GM, Ford, Teck, and banks (insert your own memories here).
While there certainly is, and was opportunity in the oil/energy space, depending on time-frames and risk tolerances, what is important to recognize is that because of oil's impact over most industries in the world, this change in price will have significant ripple effects to be aware of and take advantage of.
Having a bent towards the mining industry, my mind immediately went to what impact this significant move could have on the mining companies, or specifically the gold miners, and the gold price.
The chart below was taken from an Oceanagold Corp. (ASX:OGC) presentation and shows the current gold price with the red line and industry all-in sustaining costs. You could add your favourite gold stock or project into the same chart. You should.

Gold actually performed pretty boring last year, basically staying flat, even though the equity prices and investor's emotional states may have suggested otherwise.
With gold flat, and oil down 50% in three months that should make a lot of happy miners, especially the bulky, low grade, energy/oil sucking operations, where oil is a major input cost.
One of the fallacies many gold investors have been under over the last several years was the belief that say for example if the spot price and all in cost of producing gold for a company were both $1000 per ounce, and the price of gold moved up +$500 per ounce that would mean an extra $500 per ounce of gold produced for the company and shareholders would rejoice, making money hand over fist.
That may have happened, but instead of rejoicing, most shareholders saw industry costs inflate along with the gold price, eating gains. Combine that with some wacky M&A, the normal political, environmental, community and commodity price risks, a proliferation of alternative investment products for gold investors such as ETFs and royalty companies, exploding G&A costs and payrolls and bonus structures, and you can see why many gold investors are feeling shorted.
But gold staying mute, and oil falling should be a net positive. That is unless gold follows historic trends and shadows dropping oil prices. 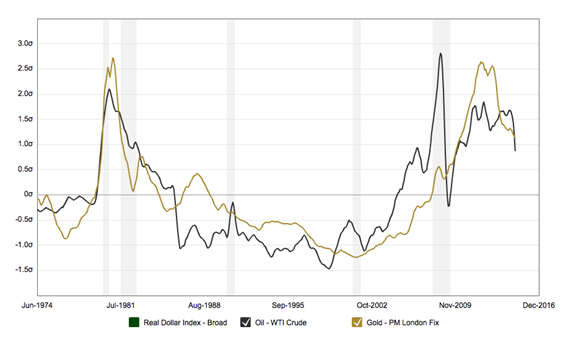 Regardless, the fall in oil should be noticed and action should be taken to respond to new opportunities created and move away from opportunities now closed.
And either way, the upcoming year as fellow market observer Chris Ecclestone has stated will be the "Year of the Manager". Those companies and teams that show they can make a buck when all about them are blaming "weak" commodity prices will be standouts. And the investors that can identify them from the crowd will be rewarded.
Ryan Fletcher is a mining entrepreneur, financier and investor from Vancouver, Canada. Co-founder of Montan Capital Corp., he is a graduate of the University of British Columbia Okanagan with a Bachelor of Arts degree in Economics and serves on the Communications Committee for AME BC.
Here is the full archive of Ryan Fletcher's articles on Gold News.