END_OF_DOCUMENT_TOKEN_TO_BE_REPLACED

What followed 'a gold standard on Quaaludes'...
SUNDAY 15 AUGUST will mark 50 years since America stopped backing the US Dollar with gold, writes Adrian Ash at BullionVault.
Because the Dollar was by then the lynchpin of the global monetary system, that ended the precious metal's ancient role as the ultimate yardstick of value worldwide.
Soon known as the Nixon Shock, the move spurred record peace-time inflation, unleashed the free flow of global capital, and now leaves money as just another floating price today, weightless, anchorless and limitless too.
Quantitative easing by modern central banks shows that.
If it hadn't been Tricky Dicky, however, it would have been one or other US president sooner or later. Change was inevitable. Indeed, the global monetary system – built upon America's gold-backed Dollar in the ashes of WW2 – was already working too well to keep working by 1959 according to the "dilemma" presented to Congress that year by Belgian economist Robert Triffin.
With the Dollar fixed to gold, and all other currencies fixed to the Dollar, the US currency stood in for bullion to make global settlements between governments.
So the world wanted ever more dollars to fuel trade and growth, Triffin explained. Yet foreigners would only keep trusting and using dollars if Washington imposed low-inflation policies at home, limiting the currency's supply and risking "a disastrous reversal in the post-war trend toward freer and expanding world trade."
The Nixon White House also wanted to avoid any slowdown in the US economy. Hence the fast-expanding supply of dollars, needed to pay for America's war in Vietnam as well as its growing trade deficit.
By summer 1971, the US gold reserves – halved in size from 2 decades before, and still priced at $35 per ounce – were worth just 1/8th of the America's bullion-backed Dollar obligations abroad. Gold in the free market was meantime rising above $40 per ounce.
This two-tier market had begun in April 1968, after massive speculative demand for gold following Britain's 15% devaluation of Sterling the previous November overwhelmed and broke the US-led London Gold Pool of co-ordinated central-bank sales, aimed at capping the precious metal's free market price at its official Dollar value. Now open trading at floating prices ran in parallel to central-bank transfers still made at the fixed price.
Back in the Great Depression, British economist (and architect of the Bretton Woods deal) John Maynard Keynes had called the monetary chaos of the 1930s "a gold standard on the booze". But the system from 1968-1971 was more like a gold standard on Quaaludes – divorced from reality but crashing into it, dizzy with nausea and struggling to keep breathing.
Moreover, removing the Dollar's gold bullion backing was only another step on the long road from people buying and selling with precious-metal coins to using paper banknotes, then cheques and plastic cards, heading towards our increasingly cashless world today, where most money exists as a digital entry in the banking system.
But while the change was inevitable, and while it didn't create these social or financial trends, it did spur three global shockwaves, each of which we're still living with today.
#1. Inflation
Inflation in the cost of living wasn't unknown under bullion-coin or bullion-backed money.
The British experience, for instance, offers the world's longest-running and most reliable (if imperfect) data. It saw the general price level rise more than half the time between the early 13th Century and 1913, a period when the Pound Sterling was literally a weight of precious metal.
According to the Bank of England's A Millennium of Macroeconomic Data project, in fact, using gold and silver coins failed to stop the general price level rising 10-fold between the First Barons' War and the Civil War four centuries later.
Strong deflation also cut deep however, and that stabilized the Pound's domestic purchasing power over time. But once Britain abandoned the Gold Standard in the 1930s, in contrast, it experienced nothing but inflation on that time series, and prices accelerated like never before following the Nixon Shock.
Within a decade, the British cost of living had risen by 230%. It's now more than 100 times what it was on the eve of the First World War. 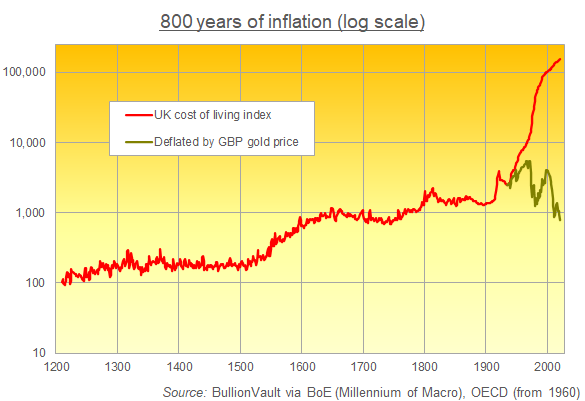