END_OF_DOCUMENT_TOKEN_TO_BE_REPLACED

Why it's always a good idea to keep the mainstream media in a box...

I'VE BEEN watching the herds to try to determine just when the interest rate topic would shift among the best and brightest (as chosen by the media), writes Gary Tanashian in his Notes from the Rabbit Hole.

When would it start to pivot from the 'rising rates!' hysterics that have been locked and loaded in the public psyche since the US election to a sort of 'rut roh, maybe we got played again...' realization that Rome – and a Great America – are not built in a day...?

What I am trying to say is that after the previous media headlines last summer (mainstream media: NIRP & BREXIT!! Everybody into risk 'off' bonds!) yields reacted a bit and rose as they should have, from a contrary setup, in order to catch the herds off sides.

But then the hysteria over the Trump election led to the Druck'n Suck-In of the true believers (or 'Sons of Druckenmiller') and...here we are with everybody anti-bonds, pro-reflation and pro-interest rates.

Maybe they would be right this time, but then again, given the herd's history (from Sentimentrader w/ my markups)...

What got me on this is not that bonds are bouncing in line with NFTRH's favored short-to-intermediate term view.

The market has taken a hard lurch in our direction, sure. But these are the markets and they live to make over confident or overly promotional commentators eat their words.

What got me on this is that the robo financial media are still just churning out the pablum on an assumption (rising long-term rates) that is anything but assured. From MarketWatch...

The title baits you to click and find out just what level that global fund managers think would trigger a bear market in stocks.

"Yields remain too low to hurt stocks for now, survey respondents said, with a minuscule proportion arguing that a 10-year Treasury yield at 2.5% would prove fatal to the bear. But 67% of respondents say a yield in the 3.5% to 4% range would put stocks in the danger zone."

Dude, I hate to clue you, but stocks were rising with Treasury yields and a decline in said yields puts more and more people in risk 'off' mode because bonds would be rising and they'll do what they always do and eventually chase the hot (and mature) macro trade.

Meanwhile, below is the updated monthly chart I created (on Jan. 5) of the 10-year Treasury bond yield, in response to a goofy mainstream-media article centered on Louise Yamada's ability to draw a trend line and draw a scary conclusion and headline for the media to bait more clickers with.

Where does the 10-year yield reside today? Basically at the same level it was at when we called b/s on these hysterics 2.5 months ago.

Imagine that! TNX stopped right at the 'limiter' AKA the monthly EMA 110, which has halted every rally since 1994. 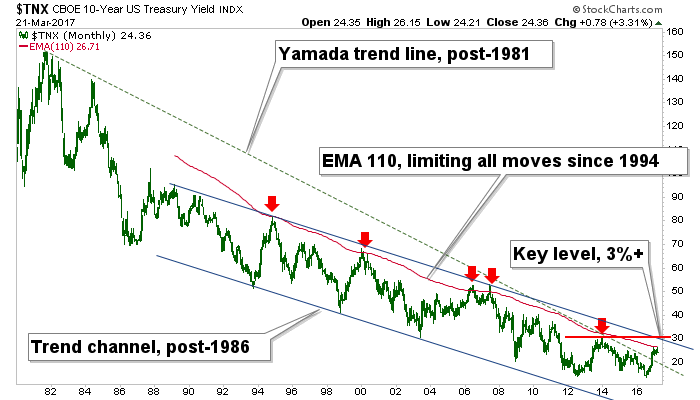 Point being, this proved a good day here at Bullshitter's Anonymous. Anything can happen, but it is always a good idea to keep the mainstream media in a box.

Read 'em, laugh at 'em...even glean some worthwhile information from them. But also realize the amazingly high proportion of time that the MSM spews, the herd believes and then it all goes wrong for a majority. That is because the media report the news, just like your 'action team' at the local studio. If you react to news that's already been anticipated and factored, you are by definition late and set up by the market to be on the wrong side.

Meanwhile, MarketWatch trumpets these 3 headlines as top billing. And yes, item #2 truncates the words 'Trump trade' too. That's a 3-fer from the MSM reporting what has been in process for weeks now – a weakening of said 'Trump Trade' items in a negative divergence to the broad market. 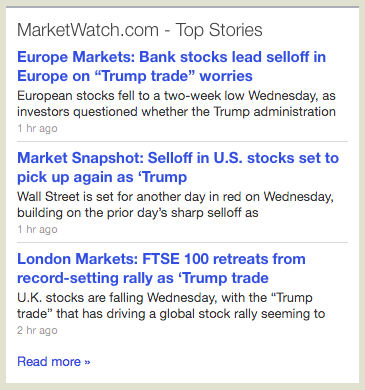 Our long-standing targets at NFTRH were 2410 for the S&P 500 on price (it actually stopped at 2400.98) and "by March/April" for time. There's luck in there for sure because folks, I'm not that good. But neither is anybody else, especially the MSM, endlessly packaging news items that should be irrelevant (at best) for a successful investor.

Do the work not to be caught up in media rabble rousing. One day, when everybody finally realizes the 'Trump Trade' was just another promotion, it'll be time to go the other way again.