END_OF_DOCUMENT_TOKEN_TO_BE_REPLACED

I WAS IN NEW YORK earlier this week for the Value Investing Congress, reports Chris Mayer of Capital & Crisis.

Among the more valuable presentations were those of Sean Dobson at Amherst Securities and Whitney Tilson and Glenn Tongue of T2 Partners. They were valuable because they helped frame where we are in the US mortgage crisis, which has been the main shark in the water over the past couple of years.

You should know where that shark is and whether or not it is hungry. This chart shows you the ferocious fish may still have an appetite. 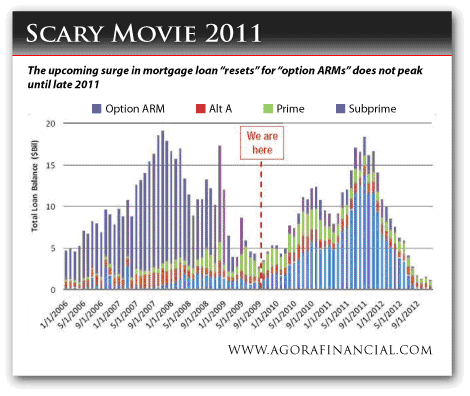 As you can see, we are past the vicious subprime crisis, when the shark chewed through the balance sheets of a number of banks and financial institutions, in some cases devouring them whole.

However, it is not yet safe to get back in the water. There are other slices of the US mortgage market that are not quite as risky as subprime, but which will reset – and force the debtors to face higher rates – in the next couple of years. Years 2010 and 2011 face big resets in so-called Alt-A and Option ARM loans. What this means is more write-downs and more losses for banks and others who hold these mortgages.

Making all this worse is the fact that the housing market itself has not yet recovered. The duo from T2 Partners speaking in New York made the case that the current "stabilization" of the housing market is a head fake. Mostly, it's due to huge government support of the housing market. But there is still a large inventory of homes out there. And with these resets coming due, we've still got a large amount of foreclosures on the horizon.

And all the while, the unemployment numbers are still poor. The T2 duo calls the unemployment situation the "most severe since the Great Depression." The US economy has shed over 8 million jobs in this recession and unemployment – officially – is nearly 10%.

Plus, it's not like the average US consumer is in a good position to sail through this crisis. Household liabilities are still high. 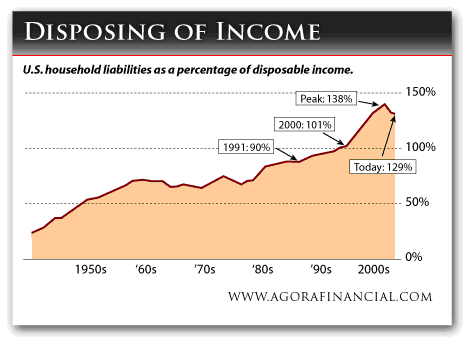 US consumers need to save and rebuild their financial strength. This is why the savings rate is on the rise. This is why, for the first time since the 1950s, household credit debt declined.

As investors, it seems clear that any idea that depends on discretionary consumer spending – say, buying trendy new sweaters or watches or expensive shoes – faces some big head winds. Better to the stick with the necessities, I say.

Also, it looks like the bounce in the stock prices of overleveraged banks and financial institutions is premature. Most bank stocks should be sold, not bought. The bounce in home building stocks looks ridiculous in light of what they have to look forward to.

The T2 duo actually recommended shorting the home building stocks, and betting the stock prices of the home builders will go down. They made a compelling case, of which I will highlight a few things.

Exhibit A would be the fact that the average new home has been on the market for 12.9 months. Exhibit B is that we have about 2-3 years of existing home sales just to absorb the vacancies that exist. According to T2, about 6% of all homes built this decade are vacant.

Exhibit C is that the home builders themselves have too much debt and too much inventory relative to their thin equity cushions. The home builders are in the position of trying to hold up a bowling ball with a sheet of paper...in the rain.

Lastly, the home builder stocks are almost universally expensive on a price-to-book basis. 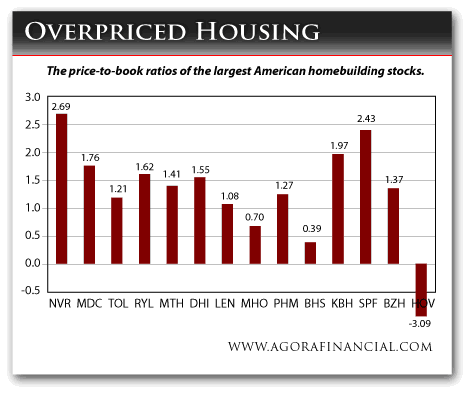 Stocks that are stuck with lots of debt, too much inventory and an awful market don't deserve premiums over book value. Discounts are more like it.

So there you go. I like the idea of shorting the home builders. At the very least, I wouldn't buy one. I'd also stay away from banks and financial institutions that hold mortgage assets, too. American real estate is not worth zero, as Dobson said, but it can be worth a lot less than today's price.

I recommend staying with the sorts of companies that own essential assets and/or sell essential items. As I like to say, stick with what keeps civilization a going concern. And avoid any stock that is dependent on regular access to the credit markets. As we saw in 2008, a mortgage crisis can shut down the credit markets. We don't want to be held hostage by lenders in that situation, so stick with excellent financial conditions.