END_OF_DOCUMENT_TOKEN_TO_BE_REPLACED

Government debt might explain the loss of $3 trillion in Treasury backing today...

TIM GEITHNER, the Goldman Sachs Secretary of the Treasury, has gone on record as saying that the government will withdraw its $3 trillion backstop guarantee from the money market fund industry, on schedule, this September 18th – i.e. today, writes David Galland of The Casey Report.

While I am for any reduction in the government's role in the economy, this decision is pretty interesting. Why would they do it now, when even a cursory examination of the real economy shows that things are shaky and rocking the boat on investor confidence seems a bit of a gamble?

I will try to answer that question, but only after stepping back to 2008 when I was told by a friend of mine in the most rarified air of high finance that he and all his peers had pulled all their cash out of money market mutual funds in March of 2008. They had done so because of the large quantities of suspect paper littering the portfolios of the funds, much of it anchored to commercial real estate and syndicated portfolios of consumer loans.

As of mid-year 2008, 40% of outstanding corporate paper was held by money market mutual funds. The funds had taken on this paper as a way of trying to boost their yields and therefore gain a competitive advantage.

Another friend, an executive of a very large mutual fund company, confirmed that what lurked under the hood was ugly indeed.

In September of 2008, these concerns were made tangible when one of the largest US money market funds, the Reserve MMF, "broke the buck". Which is to say that the fund's net asset value had fallen below the $1.00 benchmark that money market funds traditionally hold the line on. When the news broke, the public started heading to the exits, which is why the government had to step in with a deposit guarantee.

For the record, money market fund sponsors are under no real obligation to maintain a $1.00 NAV. Rather, that has become customary – a selling point, if you will – with the fund sponsors under no hard obligation to assure their NAVs don't fall below that level. They hold the line at $1.00 because they know that it is very much in their interest – and the interest of their industry – to do so, even if that means they have to step up to the plate and provide the cash required to repair any holes in their balance sheets to avoid breaking the buck.

Interestingly, though breaking the buck is seen as something of a "black swan" event, it actually happens with great regularity. In fact, according to one study, over one-third of all money market funds have had their NAVs fall below $1.00 since July 2007. The only reason this news didn't leak out to the public, causing the sort of run experienced by Reserve, was because the fund sponsors were able to quickly rush in with the necessary cash infusion.

Which brings us to September 18 and the expiration of the government's guarantees.

While the money market funds have clearly reduced their exposure to the worst sort of paper, a fact you can see in the steep downward slope of their yields over the last couple of years – the higher the risk, the higher the yields – they are still sitting on huge chunks of risky paper.

Glance at the prospectus of your favorite money market fund, and you might find, as I just did by looking at that of one of the world's largest money market funds, that 38% of the portfolio is made up of CDs issued by foreign banks, 9.9% in short-term corporate paper, and 12.3% in medium-term paper, much of it hitched to the fates of portfolios of car loans, insurance companies, and a variety of corporate entities. 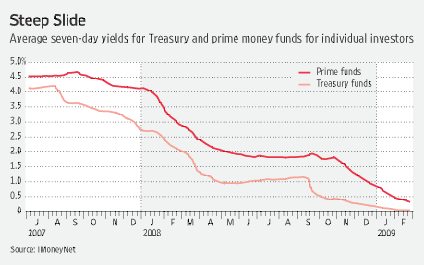 In exchange for taking on that risk, you would have earned, so far in 2009, a yield of 0.55% on your money. Yes, just a hair over half of one percent. Of course, out of that handsome return, you'd have to pay your taxes, cutting the return well below even today's purportedly reduced inflation levels.

As of September 2009, there was $3.58 trillion in money market mutual funds, of which just shy of $2 trillion is sitting in taxable non-government funds.  But that money is starting to move: over the last month, money market mutual fund redemptions have been on the rise – with assets falling by a significant 15.3%. With the government pulling its guarantee, and given the risk associated with the money market funds, I have to wonder how many more investors might also decide to pick up stakes in the days and weeks just ahead?

And where might all that money head? Most likely, given the cautious nature of money market fund holders, into FDIC-insured accounts and CDs, and into Treasury funds and instruments. That, of course, helps the banks, and it helps the government meet its aggressive funding needs, while simultaneously taking pressure off interest rates.

If you are aware of a money market fund sponsor that relies on its non-government money market funds for a sizable percentage of its income, it might make for an attractive shorting candidate.

Finally, I have a question for those of you who are parking money in taxable money market funds at this point, especially those that are not invested in Treasuries. And the question is this, "Are you out of your mind?"