END_OF_DOCUMENT_TOKEN_TO_BE_REPLACED

Macroeconomic factors will move gold higher...
The GOLD MARKET entered a period of increased volatility during the third quarter, usually a positive indicator for the metal, write Rudi Fronk and Jim Anthony, cofounders of Seabridge Gold, in this article published by The Gold Report.
A growing number of investors and analysts recommended the accumulation of gold as it began to move out of the shadows and into the spotlight. Global ETFs have now been net purchasers for 11 months in a row and central banks have also been net purchasers every month of this year except October when two nations liquidated some of their holdings to meet Dollar requirements resulting from the Covid-induced economic crisis.
We see a further move higher in gold in the near term as the election log jam begins to clear. The election process curtailed new fiscal stimulus since July when direct transfers to individuals exhausted their Congressional approvals. This pause in fiscal stimulus, which took government transfer payments to an astonishing 25% of household income, coincided with a pause in gold's upward momentum. However, it is very clear that further stimulus is favored on both sides of the House and even a Republican Senate, if there proves to be one, will not prevent trillions more of fiscal stimulus.
The two main drivers of the gold price are the Dollar and real yields. We expect both drivers to be positive in the coming year.
First, the Dollar: The Fed will be forced to fund whatever expenditures the Congress approves. Foreign holdings are at 10-year lows as the largest sovereign purchasers became net sellers this year. We therefore expect Fed debt monetization to accelerate in the next few months with a negative impact on the Dollar. It was a $3 trillion expansion of the Fed balance sheet in March and April which, not coincidentally, equaled a sudden increase in the US deficit to $3 trillion, that unleashed gold from its March low. Debt monetization is a formula for Dollar weakness.
As for yields, the market narrative now favors a reflation trade due to the apparent success of the US Operation Warp Speed vaccine initiative. This has provoked the sale of Treasuries as hot money has moved back into stocks, driving up yields. We expect the Fed response to be aggressive: higher yields cannot be allowed to dampen the economic recovery. In our view, the Fed is very likely to cap yields, a policy that can only be implemented by more QE. 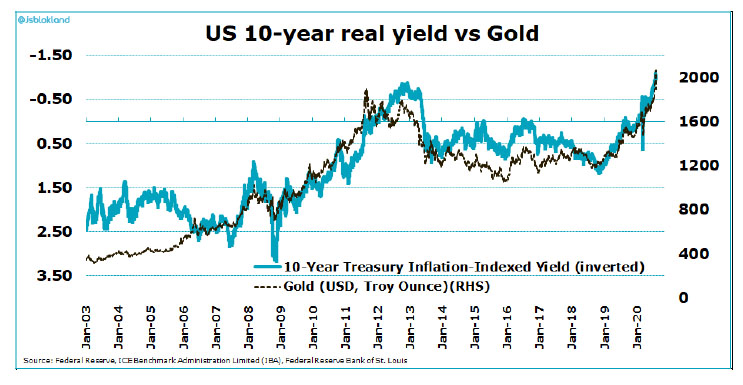 Capping yields in unison with a reflation narrative means increased inflation expectations and lower real yields...the magic formula for higher gold prices. If yields cannot rise to attract and hold private capital, the Fed must buy more debt and the Dollar must fall.
Remember that today's QE is not the QE post Great Recession, which corralled the new money in the financial system, resulting in a muted response in terms of money supply growth and inflation. Today's QE is being mainlined into the real economy by way of direct transfer payments to individuals and business, forgivable loans and bailouts.
Money supply is expanding at a blistering pace. The die has been cast and there is no turning back. Going forward, gold is the best protection for private wealth and there is not nearly enough of it to serve this purpose at current prices.
In a reflation scenario, inflation expectations rise significantly from low levels. With the rise in nominal yields capped by central bank QE, real yields fall. The relationship between real yields and gold is virtually perfect in recent years. 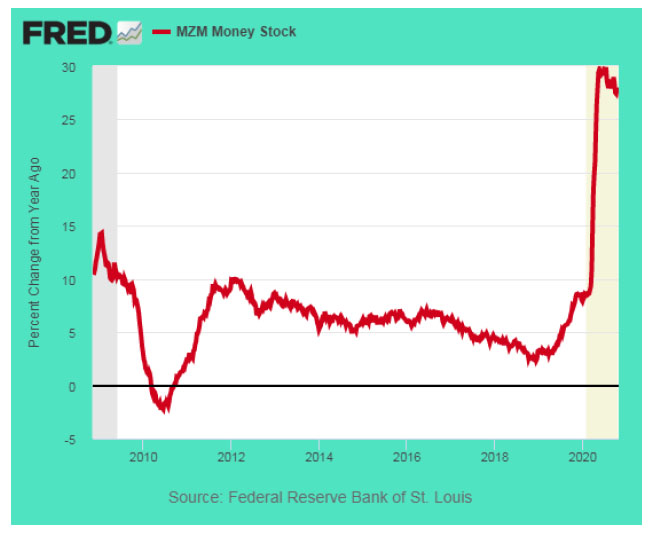 The growth in MZM money supply...the money available for immediate expenditure...has "slowed" to 27.5% year over year, down from 30% two months ago, an unprecedented pace of money creation which is temporarily keeping the economy afloat.