END_OF_DOCUMENT_TOKEN_TO_BE_REPLACED

House prices advanced 7.9% on a year-on-year basis, the figures showed, taking the average price across the UK to £179,872 and marking the strongest annual uplift since October 2007.
The Chancellor's policies of " monetary activism" and " credit easing" including Funding for Lending and Help to Buy have, on their own terms, succeeded. According to Kaleidic Economics, the Austrian measure of the money supply is now expanding by over 12% year on year. 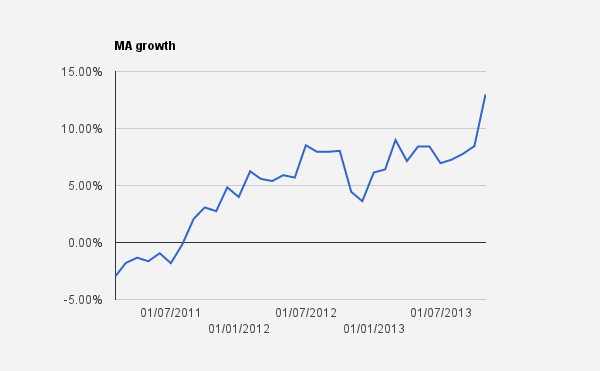 Nothing has been learned since Hayek wrote Monetary Theory and the Trade Cycle. His preface could have been written today:

"It is a curious fact that the general disinclination to explain the past boom by monetary factors has been quickly replaced by an even greater readiness to hold the present working of our monetary organization exclusively responsible for our present plight. And the same stabilizers who believed that nothing was wrong with the boom and that it might last indefinitely because prices did not rise, now believe that everything could be set right again if only we would use the weapons of monetary policy to prevent prices from falling.The same superficial view,which sees no other harmful effect of a credit expansion but the rise of the price level, now believes that our only difficulty is a fall in the price level, caused by credit contraction.
"...There is no reason to assume that the crisis was started by a deliberate deflationary action on the part of the monetary authorities, or that the deflation itself is anything but a secondary phenomenon, a process induced by the maladjustments of industry left over from the boom. If, however, the deflation is not a cause but an effect of the unprofitableness of industry, then it is surely vain to hope that by reversing the deflationary process, we can regain lasting prosperity. Far from following a deflationary policy, central banks, particularly in the United States, have been making earlier and more far-reaching efforts than have ever been undertaken before to combat the depression by a policy of credit expansion – with the result that the depression has lasted longer and has become more severe than any preceding one.
"What we need is a readjustment of those elements in the structure of production and of prices that existed before the deflation began and which then made it unprofitable for industry to borrow. But, instead of furthering the inevitable liquidation of the maladjustments brought about by the boom during the last three years, all conceivable means have been used to prevent that readjustment from taking place; and one of these means, which has been repeatedly tried though without success, from the earliest to the most recent stages of depression, has been this deliberate policy of credit expansion."

On its own terms, systematic intervention in the market for credit has succeeded: it has restarted the Domesday machine which delivered us into this mess. Those of us who have studied Mises, Hayek and the other Austrian-School masters will know that our present economic system remains built on sand.