END_OF_DOCUMENT_TOKEN_TO_BE_REPLACED

CELEBRATED value investor Benjamin Graham, who mentored a young Warren Buffett, liked to say that the market is a voting machine in the short term, a weighing machine in the long term, writes Frank Holmes at US Global Investors.

The stock market voted to reward stocks in the aftermath of the midterm elections, which gave Democrats control of the House and left the Senate in the hands of Republicans. This all but guarantees that gridlock will be the status quo in Washington, at least for the next two years.

A divided Congress might very well be the only time gridlock is a positive. Corporate gridlock can hold a company back from growing, and there's not a soul alive who enjoys sitting in bumper-to-bumper traffic. The congestion in Austin, just north of our headquarters, is legendary, costing commuters as much as 43 hours a year. (This congestion could be improved with better infrastructure, which I'll get to in a second.)

The truth is that markets favor divided government. Both Republican and Democratic presidents have had the greatest effects on stocks when Congress was split and gridlock prevailed, according to Bank of America Merrill Lynch data. Granted, such leadership makeups are rare, occurring for only a combined 11 years in the past 90, so I'll be curious to see if the trend holds true. 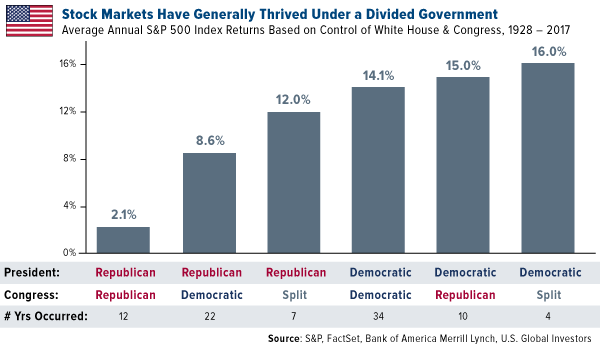 In the short term, markets showed a lot of enthusiasm. I also want to remind you that we've already entered the three most bullish quarters for stocks in the four-year presidential cycle.

Voter turnout was abnormally high for a midterm election. Here in Texas, nearly 53% of registered voters cast ballots – a very strong showing thanks in large part to the much-publicized and heavily funded Senate race between Senator Ted Cruz and Congressman Beto O'Rourke.

Indeed, a whole lot of cash passed hands this cycle. For the first time in US history, more than $5 billion was spent during a midterm election by candidates, political parties and other groups, according to the Center for Responsive Politics (CRP). That's up almost 40% from spending levels in 2014. The biggest independent donor was billionaire Sheldon Adelson, founder and CEO of Las Vegas Sands, and wife Miriam, who shelled out more than $113 million in support of Republican candidates. 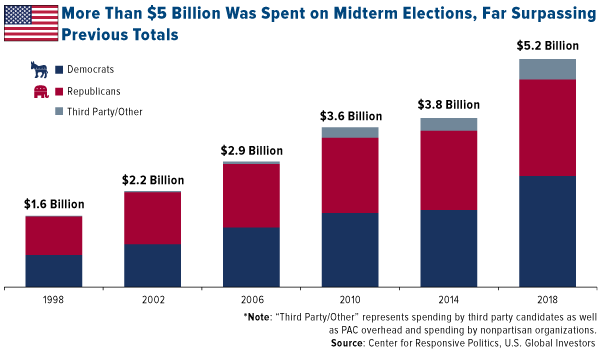 Because it's such a massive amount, it might help to put $5.2 billion into perspective. An estimated 113 million Americans participated in the midterm election, a new record, meaning roughly $46 was spent on each voter.

Here's another way to look at it. Between the House and Senate, 470 seats were up for grabs. That comes out to an incredible $11 million per seat.

Like every election cycle, this one is sure to have some huge consequences – not least of which is House Democrats' pledge to turn up the heat on President Donald Trump. Representatives Maxine Waters, Adam Schiff, Elijah Cummings and other staunch critics of the president are expected to lead key oversight and intelligence committees that could open investigations into Trump's finances and handling of White House personnel changes as soon as this January.

My hope is that Democrats and the president can agree to come together on areas of common interest. That includes infrastructure. Remember the $1 trillion infrastructure plan? Remember "Infrastructure Week"? It's possible we could finally see a spending bill of some kind, as both the Democrats and Trump support the idea. This would be a massive tailwind for raw materials, commodities and energy.

As I've shared with you before, US infrastructure is badly in need of a spit shine. Last year, the American Society of Civil Engineers (ASCE) gave the country's roads, bridges and waterways a D+ while noting that there's a $2 trillion infrastructure funding gap between now and 2025. Because this affects all Americans, it shouldn't be turned into a partisan issue.

Another winner last week was the US cannabis industry, which is expected to be worth some $75 billion by 2030, according to Cowen & Co. Michigan voted to legalize recreational marijuana, the 10th state to do so, while Missouri and Utah voters approved medical marijuana. Pot stocks, led by Canadian grower and distributor Tilray, surged on the news.

Tilray jumped nearly 6% last Tuesday, another 30% on Wednesday following the ouster of now-former Attorney General Jeff Sessions. As the head of the Department of Justice, Sessions strongly opposed legalization. Industry advocates hope the next permanent AG will be more open to relaxing federal law.