END_OF_DOCUMENT_TOKEN_TO_BE_REPLACED

Is the Bank of England governor stoking unnecessary fears to justify policy?...

DURING ONE of his media interviews earlier this month – in which he sought to justify the decision to expand the UK's Quantitative Easing program – Bank of England governor Mervyn King said "This is the most serious financial crisis we have seen at least since the 1930s, if not ever."

This is a very sweeping statement, and one that the governor has made before – for example in his speech to the Trades Union Congress last autumn, writes Andrew Sentance, former member of the Bank of England's Monetary Policy Committee.

The problem with the governor's statement is that the phrase "financial crisis" – which has a specific technical meaning for him – does not have the same meaning in the wider world. In the media and in popular discussion, the distinction between a "financial crisis" and a broader economic crisis is blurred. Many people see them as the same thing. Because of that, the governor's statement is potentially very misleading to the public and risks creating a much more apocalyptic and negative view of the economy than is justified by the economic data.

This can be seen clearly in the way that the governor's remarks were picked up in the media. For example, on the BBC website, the word "financial" dropped out of their headline and the story became: "Bank of England governor fears crisis is worst ever". British tabloid the Daily Mirror ran the headline: "Mervyn King warns financial crisis is worst slump ever" and its interpretation of the governor's comments was in line with the headline.

Sir Mervyn and the media professionals who advise him must be aware of this, and yet he continues to make the same claim. In an environment in which consumer and business confidence is very fragile, this is potentially very dangerous – fuelling and reinforcing some of the negative influences on the economy which the Bank claims to be taking steps to counter through its QE program. In terms of justifying the policy stance of enhanced QE, this might fit in with the Bank's narrative – but I can't believe it is good for the economy. 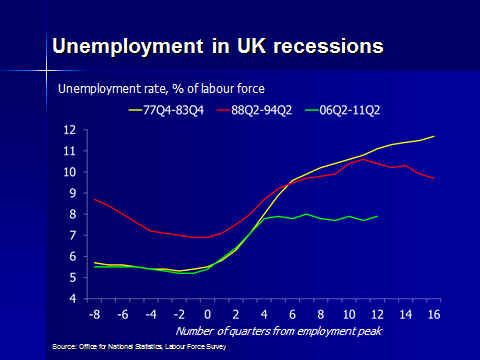 Whereas unemployment rose to over 10% in the aftermath of the early 1980s and early 1990s recession, the unemployment rate is currently just below 8%. It may rise a bit further as the slowing of the global economy and the UK economy show up in the employment numbers. But so far we have not seen anything like the unemployment experience of the 1980s – when the unemployment rate was over 10% from late 1981 until early 1987. In the 1990s recovery, it was only after four years of recovery – in late 1996 – that unemployment came down to its current rate of just under 8%.

When assessing the severity of a financial crisis, the benchmark must surely be the impact on the wider economy. One of the more positive features of the response of the UK economy to the current crisis is the resilience of the non-financial sector business community. Business failures and redundancies have been much lower than many expected, which has helped sustain employment – as the chart shows.

Maintaining the confidence of the business community through these difficult times is a key issue for economic policy-makers. In terms of this challenge, the governor's apocalyptic and gloomy statements are surely counterproductive.

This period also included a secondary banking crisis in the UK, the first major recession since the Second World War, and a request for IMF assistance for the UK economy in 1976. The unemployment rate rose from 3-4% on our current LFS measure to 5-6% initially and then to over 10% as the inflation consequences of the crisis were dealt with in the early 1980s. Unemployment only fell below 6% on a sustained basis in 1999, around 25 years later. In 25 years' time, perhaps we can evaluate whether the recent financial crisis has been worse than this. But it is about 20 years too early to rush to judgment!