END_OF_DOCUMENT_TOKEN_TO_BE_REPLACED

The nine steps that will see the contagion chew through America...

A CRISIS tends to move from the outside in, writes Chris Martenson.

The initial movements at the periphery tend to give us an early warning of when things might go wrong at the center. It is always the marginal country, weakest stock in a sector, or fringe population that gives us the early warning that trouble is afoot.

For example, rising food stamp utilization and poverty levels in the US indicate that economic hardship is progressing from the lower socioeconomic levels up towards the center -- that is, from the outside in.

That exact pattern is now playing out in Europe, although arguably the earliest trouble was detected with the severe weakness seen in the eastern European countries nearly two years ago. 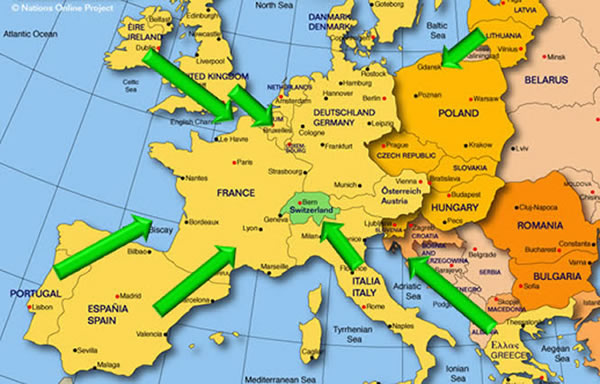 Because of this tendency for trouble to begin at the periphery before spreading to the center, here at ChrisMartenson.com headquarters we spend a disproportionate amount of our time watching junk bonds instead of Treasurys, looking at weak sectors instead of strong ones, and generally spending our time at the edges trying to scout out where there are early signs of trouble that can give us a sense of what's coming next.

In this article, we explore the idea that Europe is the canary in the coal mine that tells us it is time to begin preparing for how the world might change if the contagion spreads all the way to US Treasurys (which is mathematically inevitable, in our view).

At the very core of the global nuclear money reactor are US Treasurys and the Dollar. If the Dollar's role as the world's reserve currency wanes or even collapses, then the scope and pace of the likely disruptions will be enormous. Of course, we'll be glad to have as much forewarning as possible.

Accordingly, it is my belief that if the contagion spreads from Greece to Portugal (or Italy or Spain), and then to the big banks of France and Germany in such a way that they fail, then rather than strengthening the Dollar's role (as nearly everyone expects), we should reserve some concern for the idea that the contagion will instead jump the pond and chew its way through the US financial superstructure.

While I am expecting an initial strengthening of the Dollar in response to a Euro decline, I believe this will only be a temporary condition.

The predicament is that the fiscal condition of the US is just as bad as anywhere, and we'd do well to ignore the idea, widely promulgated in the popular press, that the US is in relatively better shape than some other countries. 'Relatively' is a funny word. In this case, it's kind of meaningless, as all the contestants in this horse race are likely destined for the glue factory, no matter how well they place.

While there are certain to be a lot of false starts and unpredictable twists and turns along the way, eventually the precarious fiscal situation of the US will reach a critical mass of recognition. Before that date, the US will be perceived as a bastion of financial safety, and afterwards everyone will wonder how anyone could have really held that view.

A good recent example of how swiftly sovereign fortunes can change: One day, everything was fine in Greece, which enjoyed paying interest rates on its national debt that were a few skinny basis points (hundredths of a percent) above Germany's. A few short months later, Greece was paying over 150% interest on its one-year paper.

What I am asking is this: What happens when the same sweep of recognition visits the US Treasury markets? Is such a turn of events even possible or thinkable? Here's one scenario.

My belief is that someday, perhaps within a matter of months but more likely in a year or two, the US Treasury market will fall apart as certainly and as magnificently as did Greece's. Here's how that might happen:

Step 1: As the global growth story frays, global trade decelerates, and the sovereign and total debt burdens of various countries drag at economic growth, fewer and fewer Dollars will be accumulated and stored by various foreign central banks. The typical way Dollars are stored is in the form of Treasury holdings. Because of this, several years of record-breaking Treasury accumulation by these foreign banks will grind to a halt and foreign Treasury holdings will begin to decline.

Step 2: The US government, thinking that foreign lending had somehow become a permanent feature of life and having consequently ramped up spending and borrowing to record levels, will find itself unable to adjust quickly, especially with an election year in sight. Federal borrowing continues amidst a sea of squabbling over meaningless, barely symbolic cuts to spending, even as official foreign demand for Treasurys wanes.

Step 3: After it is recognized that the central banks are taking a breather from more Treasury accumulation, private participation in Treasury auctions begin to wane, with the bid-to-cover declining and eventually approaching dangerously thin levels. In parallel, Treasurys traded on the open market begin to creep up in yield, indicating that more sellers than buyers exist.

Step 4: The Federal Reserve, having publicly committed itself to maintaining a zero Fed Funds interest rate through 2013 and therefore finding itself in the awkward position of having to save face, will be forced to funnel more money into the Treasury market. But because it is already committed to selling short-maturity paper in favor of long-dated paper, it does this by announcing another round of quantitative easing (QE) in some other asset class held by the sorts of financial institutions that will have no choice but to immediately park that thin-air money into Treasurys. The holdings of money market funds come to mind.

Step 5: The rest of the developing world, especially China, takes an increasingly dim view of the US reserving for itself the right to print money to buy government debt while admonishing other countries for doing the same. First, there are just verbal protests, but then more and more Treasury selling begins to hit the market. Wall Street, happy enough to make a few bucks by flipping Treasurys at the Fed's bequest, now sees that there's a lot more money to be made by selling Treasurys and even more to be lost by holding them. Selling of Treasurys, pushed by a shift in foreign perception of safety (and utility), begins to pick up.

Step 6: As the selling picks up, the rate of interest that the US government has to offer in order to attract sufficient buyers to new Treasury auctions continues to increase. Forced by this circumstance, the Fed has to raise rates in order to appear as if they are in control of the process, when, in fact, they are (once again) merely following the markets.

Step 7: As interest rates spiral higher, the amount of money that the US government (as well as state and local governments) must borrow in order to service rising interest costs creeps higher and higher. In other words, the more money the US government has to borrow, the higher the rate of interest they have to pay, which serves to force more borrowing, which makes the rate of interest go higher...and higher...and higher...each feeding the other in a classic debt spiral. This is the same dynamic that Greece is currently suffering through.

Step 8: The interest rate spiral creates a fiscal emergency for the US government, where the only choices are between slashing spending enormously (which would serve to crush the economy, perhaps by 10%-20%, and driving tax receipts down, sharply creating its own dynamic of pain), orrunning out of money and defaulting on its bills, or printing money and accepting a steep fall in the international value of the Dollar. Because slashing spending is a delicate and politically painful process, by default it almost certainly will not happen in time to prevent the interest rate spiral from occurring. As to the idea of running out of money, that is deemed an unthinkable option, which leaves money printing as the most likely option.

Step 9: While it is the politically easier solution, money printing leads to the abandonment of the US Dollar as the main reserve currency of the world. This does not happen very quickly, but neither is it a linear process. It proceeds in fits and starts, but the end result is that the US can no longer export Dollars in exchange for things, and this alone changes everything.

Long accustomed to being able to export Dollars and import things, the US grew to view this historical oddity as an entitlement. But instead, it was a relic of circumstances, first of the relative position of the US after WWII, and second due to the temporary requirement that all oil purchases must be made in Dollars. This 'petro-Dollar' feature meant that any country wishing to buy oil first had to accumulate a Dollar surplus. In short, this meant having to run a trade surplus, if not with the US, then with a country that had one itself. This allowed the US to export Dollars while other countries had to export real things.

Keeping a close eye on the data is the key to determining whether or not this projected progression is underway or even likely. Of growing interest (and concern) to me is that we are indeed beginning to see several of the earlier indicators predicted above – notably, a decline in US Treasuries held by foreigners and growing signals that more government borrowing/money printing is on the way soon.