END_OF_DOCUMENT_TOKEN_TO_BE_REPLACED

Marc Faber on how the nanny state has become unviable...

IN ORDER to exercise control over the population, governments throughout history have made people dependent on government largesse, says renowned investor Dr Marc Faber, publisher of the Gloom, Boom & Doom Report, writing in the Daily Reckoning.

A government can make an increasing number of people dependent on its generosity by providing more and more benefits to a larger and larger share of the population. 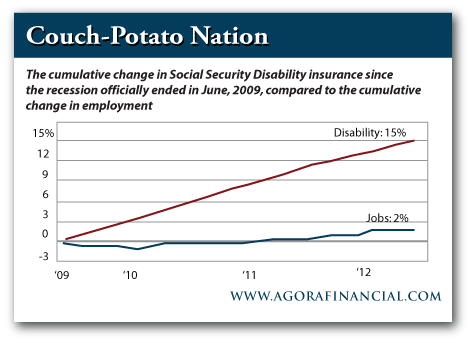 Because of these "freebies," people will go along with the government's enlargement as a percent of the economy. The masses believe in their free lunch and because the business elite knows it can profit from the growth in government.

However, there comes a point at which the "nanny state" becomes unviable. Raising taxes to pay for the freebies become problematic. Fortunately for the governments, they have a Treasury and/or a central bank that can print money and monetize the government's debts.

Credit expansion is the government's foremost tool in their struggle against the market economy. In their hands is the magic wand designed to conjure away the scarcity of capital goods, to lower the rate of interest or to abolish it altogether, to finance lavish government spending, to expropriate the capitalists, to contrive everlasting booms, and to make everybody prosperous.

Therefore, the broad population, whose attention will be distracted by the media, won't realize the negative consequences of large fiscal deficits. They will hardly notice their declining standard of living due to the loss of purchasing power of the currency. In the meantime, the media will bombard them with further immaterial news, such as which Hollywood star is divorcing whom, which team will win the Super Bowl, and abortion rights and gay marriage issues.

The government will also become involved in larger distractions, such as arguing for the need to eliminate continuously new (usually invented) threats or foes arising from ethnic or religious minorities, communists, socialists, terrorists, spies, or, as is now the case in the US, the "vicious" 1% of the population that lives well.

A political system controlled by an ignorant electorate that is manipulated by a dishonest and controlled media that dispenses propaganda on behalf of a corrupt political establishment can hardly be the path to lasting prosperity. 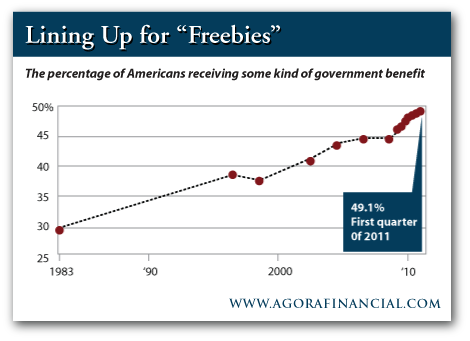 In fact, I am surprised that economists continue to discuss GDP growth (usually in real terms), when they should be focusing on sustainable growth. Let me explain. Since 2000, US government debt has increased from US$5 trillion to over US$16 trillion. Over the same period, nominal GDP is up from approximately US$9.5 trillion to US$15.5 trillion. 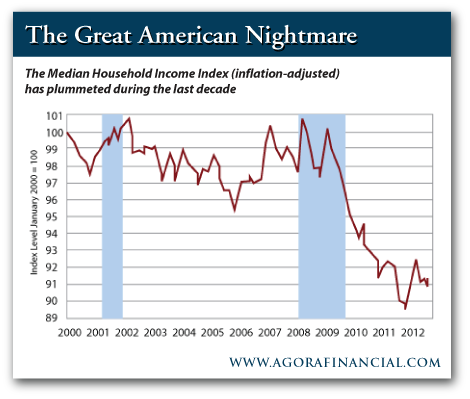 In my opinion, an adjustment to GDP should be made for the increase in government as well as household debt, because both inflate GDP figures, but are not sustainable in the long run, as we now know from some peripheral European countries. I mention this because Eric Fry, writing for The Daily Reckoning, points out the following:

During the last four years, the number of Americans on food stamps has soared by more than 17 million, while the number of employed Americans has dropped by more than 3 million. In percentage terms, the number of Americans on food stamps has soared 60% in four years!… In fact, according to the "Outreach" section of the USDA [US Department of Agriculture] website, the soaring number of food stamp recipients is an absolutely fantastic success story: "SNAP (i.e. food stamps) is the only public benefit program which also serves as an economic stimulus, creating an economic boost that ripples throughout the economy when new SNAP benefits are redeemed. By generating business at local grocery stores, new SNAP benefits trigger labor and production demand, ultimately increasing household income and triggering additional spending."

There you have it. The government increases its borrowings (through fiscal deficits) in order to pay for, among other things, food stamps. In turn, the food stamp recipients go and spend the money in stores (mostly at Wal-Mart), which boosts GDP. But is this real, sustainable GDP growth?

So, not only do fiscal deficits allow the government to expand useless and unproductive programs and expenditures that artificially boost GDP, but they also increase the number of bureaucrats who implement the new regulations that stifle business. To the neo-Keynesians, I can only say: "Well done."