END_OF_DOCUMENT_TOKEN_TO_BE_REPLACED

So I was like, Not me! Not in this economy or with my stock-market...
The ISM PMI reports for December and January showed deceleration, writes Gary Tanashian in his Notes from the Rabbit Hole.
That was in line with our view that a persistently strong US Dollar would begin to eat away at US manufacturing, exporters and other companies that depend on significant foreign business.
But in an age where investors will bid up Twitter (with its forward P/E of 141 and $30 billion market cap to $1.2bn revenue) by 16% in a day, are we returning to the old days of 'PE's don't matter' with the hook or tout being 'it's all about ad revenue'...?
One analyst quoted in the WSJ:

"Given FB's (Facebook) history...we think that investors do not want to miss out on another social stock run"

Is this type of mentality not reminiscent of the late 1990s?
Twitter, like Facebook, is implementing strategies to monetize all those short attention spanned eyeballs. But $30bn...?
As you will see by the charts in this week's report, despite elevated general forward valuations (graph below) and ridiculous individual valuations like Twitter and so many other fad stocks, the bull market's technical situation remains unbroken and generally bullish, although the volatile 'swing' market theme remains intact for now.
Here is the current forward P/E level of the US stock market (graph source is factset.com, by way of the free Daily Shot email service from soberlook.com. They each cover relevant global macro data and are recommended.) 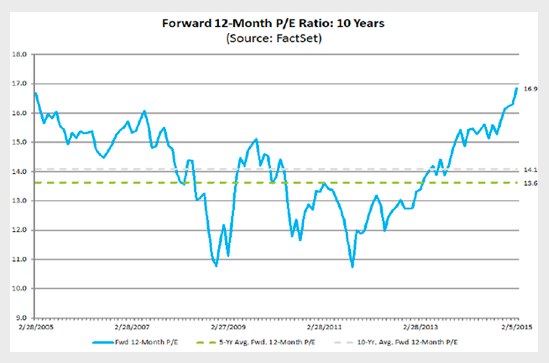 P/E is as stretched as it gets for US corporations. But in a world where deflation is the key theme, capital flows have well, flowed into US asset markets.
On a risk vs. reward basis, the view continues to be that certain global areas are more favorable than the US for new investment. As an example, we have been noting that Germany, as an exporter operating behind a weak currency and QE-inclined Central Bank, could be a destination for favorable investment vs. the US in 2015. Deutschland factory orders are improving. 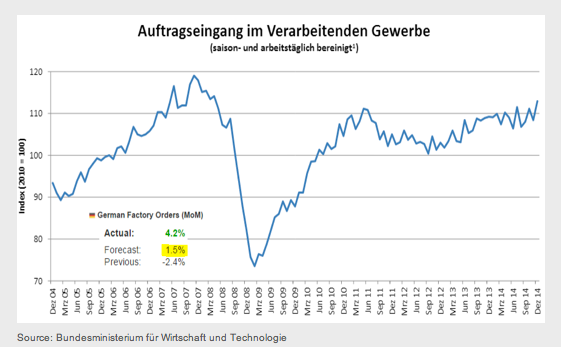 US manufacturing, which took the ball from the Semiconductor Equipment sector in 2013, ran with it for a while and then handed off to an obviously improving economy and 'jobs' market.
Now, with the +257,000 jobs number (with a bump up in wages) and strained valuations on the US stock market, we remain in the 'as good as it gets' phase. And 'as good as it gets' is not what 'risk vs. reward' investors look for. It is what trend following momo's look for. Someone after all, has got to push Twitter to its rightful forward P/E of 200.
So the Machine Tools data in the US did something it has not done in the post 2009 recovery; it failed to realize a year-end ramp up, especially in December, despite this having been an International Machine Tool Show year in Chicago (IMTS is every 2 years).

You know, gold stock investors talk about PDAC, which I have never attended. But I have been to IMTS and I'll guarantee you this show makes PDAC look just like what it probably is, a collection of 90% pitch men and idealistic investors being told what they want to hear. IMTS is a massive exposition with the latest high end manufacturing technology on display for an incentivized customer base.
In line with recent deceleration in ISM, the Machine Tool sales data are now a concern for the manufacturing economy.
The question is, again, will manufacturing matter to the financialized economy?
As a former manufacturer, I recall 1990 to 2000 as a time when media were increasingly telling me I had no future as the US was a service economy and 'dirty' jobs like manufacturing were being outsourced, first to Japan, then Mexico and then China. Never mind that my company's best years were still to come; for the stock market, it is perceptions that matter. Even if we make an assumption that the US manufacturing sector will continue to decelerate, a lag may be in play.
Recall that it took several months for the Semi Equipment → Manufacturing → 'Jobs' cycle to play out.
From the also recommended email service from floatingpath.com, here is a breakdown of the various Payrolls components. There is manufacturing amidst all those laggard 'services' sectors. The point is, while manufacturing was early to the economic party in 2013, it could get kicked out before closing time as people bask in leisure activities and lap up services of all kinds. This concept is reminiscent of what drove the final bubble blow off to termination in 2000. 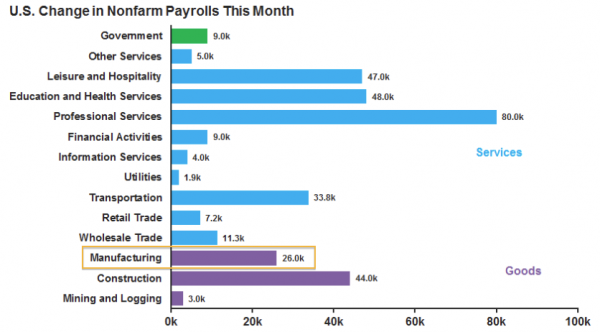 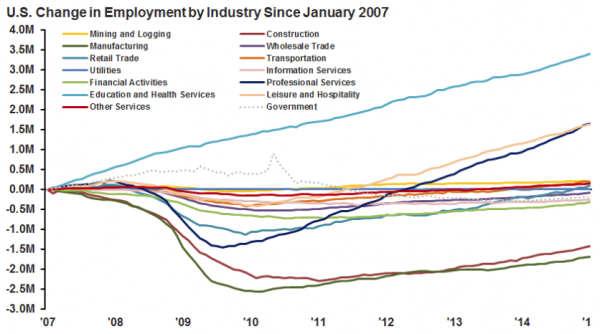 Considering that the one who puts the con in 'Consumer Economy', is feeling good about his job prospects and is back to pre-2008 credit card spending levels, we can see that another component of the financialized economy is playing along. From St. Louis Fed: 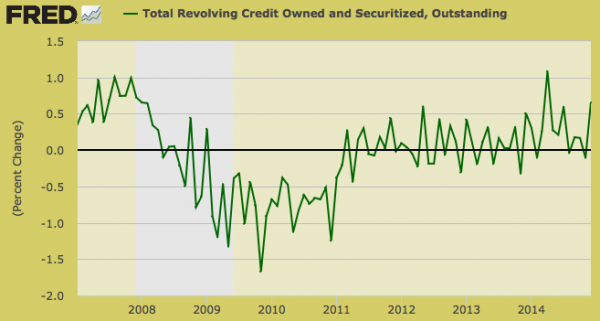 What does it all mean? Well, the data above are not tools we can use to pinpoint a top in the over valued US stock market. We will need to continue to track the short and long-term technical status for that.
Nor are they tools that will forecast a topping out of the aggregate US economy. In that regard, manufacturing was an early leader to the upside and assuming it continues to weaken (it is still just an assumption, not a trend), it could be an early leader to the downside, while various other components of the consumer economy move forward just fine for now.
In fact, one could view Europe as inviting global capital flow into the Euro zone with its QE operation designed to boost asset prices. After all, this worked swimmingly for the US. But if the Euro operation fails to have a beneficial effect on European assets, capital in thefinancialized global economy could resume its impulsive flows into the US, valuations be damned.
Remember King Dollar from the 1990s?
In the absence of such an event, we may see the potential of one small but important leg (manufacturing) getting kicked out from under the US economic table, signaling a future deceleration in other areas. But just as the Semi's → ISM → Economy/Jobs progression took some time to play out to a readily observable 'as good as it gets' backdrop, there could be a substantial lag before more legs break and the next event clears the table top of all those spinning tops (AKA lagging macro data points).