END_OF_DOCUMENT_TOKEN_TO_BE_REPLACED

Inflation is certainly here and working its way to the consumer...

INFLATION – that is a fall in the value of the purchasing power of money, writes Toby Baxendale at the Cobden Centre.

Deflation – that is an increase in the value of the purchasing power of money.

Stagflation – that is a fall in the value of the purchasing power of money (i.e. inflation) combined with a rise in unemployment. The reason this is distinguished as a category in its own right is that the Keynesian revolution taught that in the absence of full employment, if there was less demand to hold a cash balance, the corollary being spending more in the economy, then the extra demand for goods and services should soak up the excess labor and idle capital.

We are experiencing malflation, where the money supply – as measured by "Money Actual" (MA) – is rising, as is price inflation, whilst unemployment is not stagnating the economy, because the private sector has already seen wage adjustments downwards. (This is contrary to the Keynesian mantra that wages are sticky.)

The reason we do not have high unemployment in the UK at present is that, as opposed to the 1970s, the private sector has been very quick to cut back on wage increases and indeed has been forced to run very lean operations. Whilst the all-consuming public sector has grown and grown, with the new Coalition Government we have seen a determination, not seen for many years, to keep this in check.

The stagflation phenomena of rising prices and rising unemployment was what we experienced in the '70s. It was one of those empirical "in your face" observations that killed the Keynesian system first time around and allowed other Schools of Thought to come to the fore. 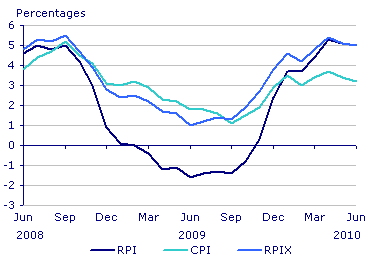 The input price index for materials and fuels purchased by manufacturing industry meantime rose 11.2% in the year to May. I specifically point this out, as the input price is the very start of the chain that leads to final consumption which is measured in the CPI. This input-price inflation is running at 11.2 %. The output prices are running at 5.7%, suggesting that we in business – at the productive end of the economy – are absorbing shocking price rises for now.

What we can absorb in productivity gains can be lost to us by these higher prices, but eventually costs must be passed on to ensure that we don't go bust. This pipeline of inflation is certainly there and working its way to the consumer.

The fact we have these various measures and we only focus on the consumer or consumption element goes back to a faulty understanding in economics. Suppose that a fisherman sells me a wild turbot for £1.00. I cut it up into several portions according to the specification of a restaurant owner, and sell it to him for £5 per portion. The restaurateur then adds sauces and vegetables and serves it to you, the end consumer, for £20 per portion.

All of those inputs are included in the final price you pay for the meal – according to conventional thinking on this matter. Thus the measuring point for the statistician is the price of the meal and not its various individual component journeys from the sea to plate. If it goes up from £20 when served to you, the statistician is measuring inflation at this point and nowhere else.

(On a side note, I was having an argument with the Inland Revenue over some tax treatment in the company and on my personal tax. In a fit of pique I said "as I do not exist according to the GDP statistics, I should not be paying any tax at all in the company or on what I take as drawings." To which the said inspector hummed, unable to answer, and sent for his boss. The boss had his jackboots on that day and was not having the wool pulled over his eyes. He did accept that I had a point but said I must bring it up with another department!)

So we only see part of the inflation picture if we only look at CPI. And yet, meanwhile, wages have fallen. The Office of National Statistics in Dec '09 reported a 1.3% fall in wages during the July-Sept '09 prior quarter. If you add back on inflation, you see that substantial precipitous falls have hit private sector employees in particular.

With the state employing people both directly and via the benefits system – some 12 million people whose wages have only gone up during this period of recession – we can truly understand that the private sector has heroically adjusted its wages down to facilitate recovery whilst the public sector has not.

At this time of falling real wages, people have also reversed their long-term spending habits and now demand to hold more money in the form of savings. The UK savings ratio is now around 7% of disposable income, whereas just before the crash it was actually negative! 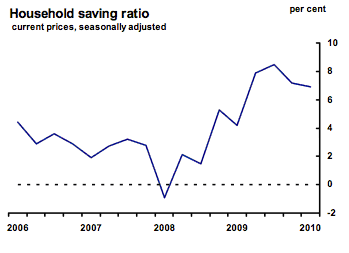 If empirical evidence was ever needed to destroy the Keynesian myth that you need to spend, spend, spend, consume, consume, consume, then it must be this diagram that shows how a 100% spend of all disposable income (and more) was not enough to keeping the economy from tipping over! As readers of the Cobden Centre's site know, we prefer the explanation of the Austrian Theory of the Business Cycle. 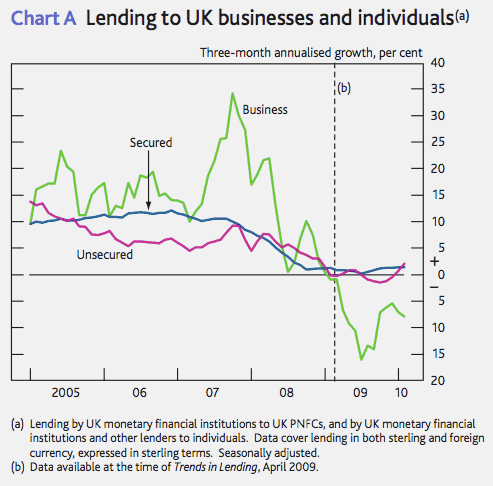 Net lending to small and medium-sized enterprises weakened by less than for businesses overall. In contrast to the picture for business lending, growth in the stock of lending to individuals – both secured and unsecured – was broadly stable over the year, albeit at low levels having weakened over the previous year. 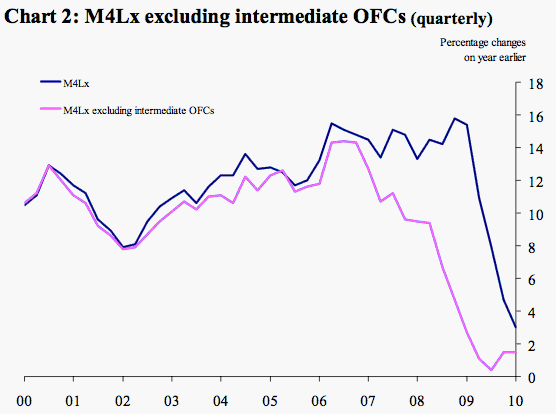 If you held that M4 was a valid measure of money, you would be thinking we are experiencing a money deflation right now. This would placate your fears about any pipeline of inflation, or indeed the threat that any of the "unconventional QE" measures such as the UK government's £200bn Quantitative Easing program may have an effect on prices.

As explained in this paper, written by Anthony Evans of the European School of Management's (ESCP-EAP) Department of Economics and myself, when you look at the money-supply measure, you need to ask yourself "What is money?" Money is the final thing for which all goods and services exchange. Our measure of money, Money Actual (MA), only measures cash and demand deposit, but not timed deposits as these need to be turned into cash (i.e. money) before they can be spent.

You can see in the following graph how in September 2008 ("Lehman Month") we had a money supply of £933 bn, but by the end of May 2010, the money supply had rocketed up to new heights of £995 bn – a 6.6% increase in the money supply in 15 months. Unlike the monetary deflation seen in M4Lx, this rise in MA corresponds nicely to the inflation pipeline that we are observing. 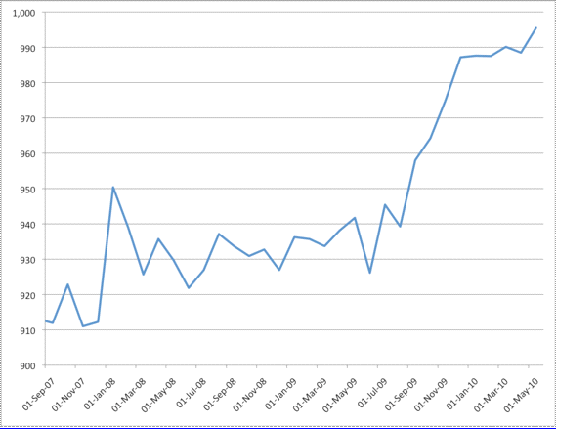 The Year-on-Year figures from 2000 to 2010 show a close correspondence between Money Actual and economic activity, from the Dot-Com boom and bust to the recent collapse. 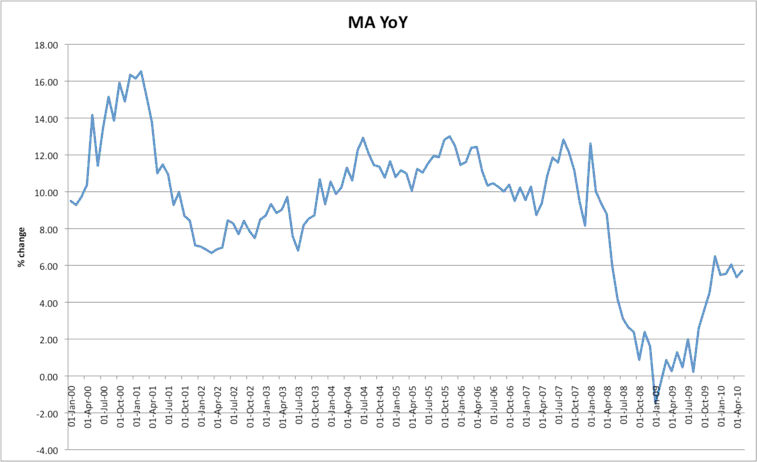 So to conclude, we are observing a period of what I call Malflation. This is unique in modern history as far as I am aware. With the right tools of analysis we can see and have explained what to conventional economics is unexplainable, that of an apparent money deflation, which has actually caused price inflation!

Malflation happens when you have a change in the demand to hold more money that is evidenced in the above savings data and in the fall off in the number of "things" happening in the economy such as bank lending, less wages doing fewer transactions and so on and so forth. It should just lead to a straightforward money and price deflation. It has not, as the real money supply has been rising as evidenced by our more robust measure