END_OF_DOCUMENT_TOKEN_TO_BE_REPLACED

DETAILED work, which got us to this point intact, if a little frustrated, is done in subscriber reports and updates, writes Gary Tanashian in his Notes from the Rabbit Hole.

But it's always handy to have a general summary view of macro markets. So let's get to it.

S&P 500 (US)
NFTRH had been noting important trend changes in the weekly charts of the main US indexes since the market's bounce failure in March. The likelihood is that a bear market has begun, but in line with the terribly over-bearish sentiment (AAII, Investors Intelligence, Smart/Dumb indicators, NAAIM...you name it, it's been over-bearish for some time now) it has come time for a bounce, bear market rally or yes, even the possibility that this bear is one and done. 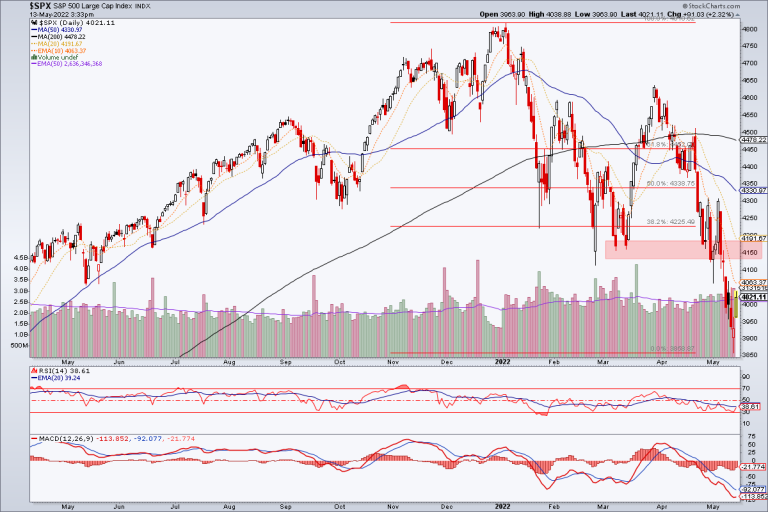 Sentiment has provided a contrary situation for a more extended rally. A shorting opportunity could well set up in the low-mid 4400s if the rally is strong enough.

Of course, alternatives are that the bounce will fail imminently (market crashes can come amid oversold conditions and over-bearish sentiment) or that the drop below 3900 in early May was all she wrote in a mini bear market taking the form an A-B-C correction to the major bull market.

SPX did after all bounce from a valid support area not visible on this chart and it also filled some nagging downside gaps that we've been watching for months. (There are several more still lower, however.)

Global Stocks
Let's use the Global (ex-US) iShares (daily) for a condensed look at the world. While there are so many different markets influenced by different macro factors, this summary article gives a general view. 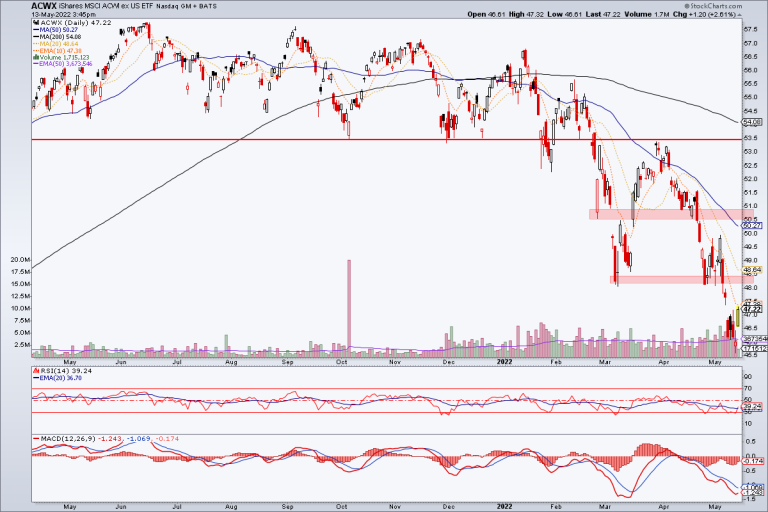 It's pretty clear that global stocks are also oversold with an initial bounce objective to 48+, then the 50 area (including the hard down sloping SMA 50) and finally the area where clear lateral resistance will soon be met by the down-sloping SMA 200. If the global bear persists, that's what we call a short setup.

Bond Market
As for bonds, let's use the daily chart of some bond funds per a post on 'inflation Wednesday' as CPI made the inflationary headlines but bonds continued in bounce mode. Okay, easy now. We contrarians should realize that it's just a bounce within firm downtrends. But I do find it interesting that the bounce held up during yet another inflationary hysteria burst. 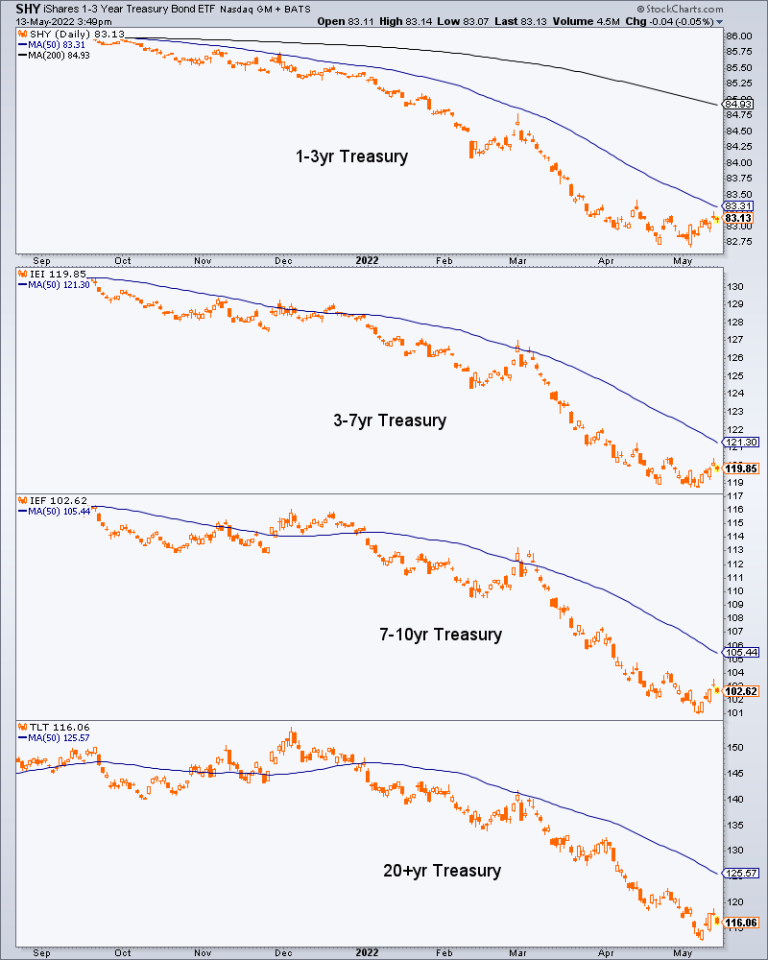 However, on the big picture the 30-year Treasury yield 'Continuum' has made a signal the likes of which it has not made in decades by taking out the limiting moving averages.

We began plotting an eventual test of the limiters back in 2020 when we began plotting the inflationary macro. But there is an important point we've also been noting lately. There is no bear market or secular change in the long bond until the November, 2018 high is taken out.

This is the point we've expected a limit on the current move after the moving average trends were taken out. Later, after a potential rally in bonds we can go back to evaluating whether or not it's on to full fledged inflationary crack-up-boom times. 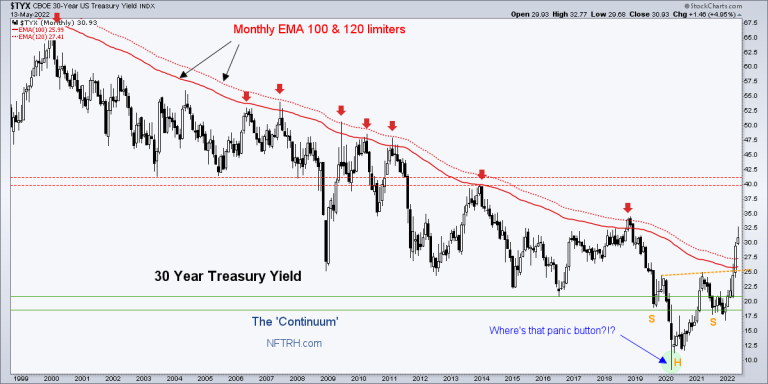 But at his moment the yield has reversed below 3.5% as expected (the long bond itself ticked a slight lower low before reversing back above).

US Dollar Index (DXY)
As for the US Dollar, the receiver of the world's liquidity since well before the stock market bear phase became obvious, its monthly chart (DXY) shows a spike leg up that we tracked through 2021 into 2022 for its divergence to inflation and its potential to sop up liquidity in a global market correction.

Uncle Buck knew long ago that the Fed had inflated a mess and was going to be forced by items like the Continuum above (interesting how it all meshes together when you use the right indicators, isn't it?) and the bond market in general, to address it. 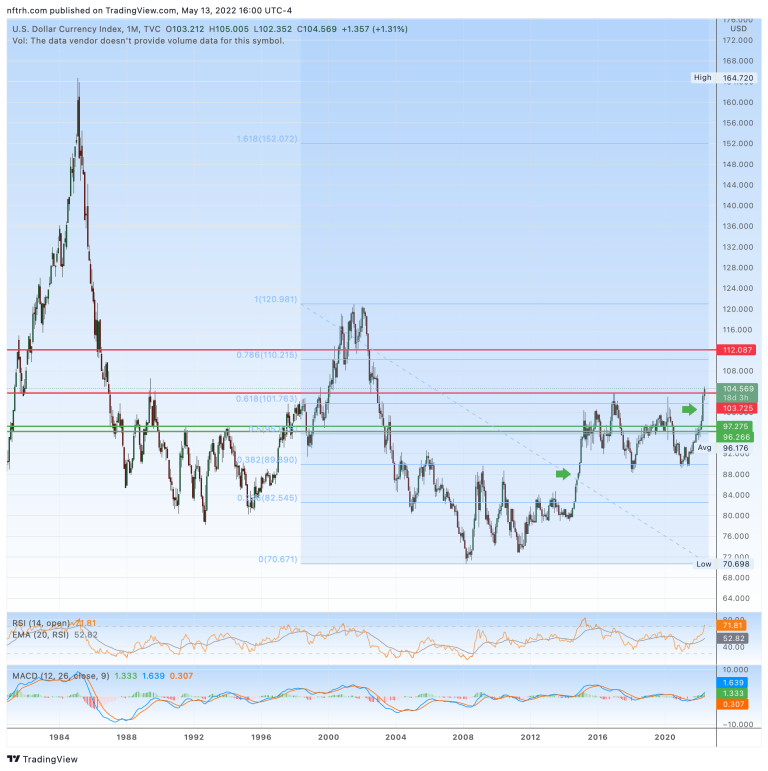 At the moment DXY has ticked a new high since the bull market began in 2008. But it's May 13th [as of writing], USD is overbought on all time frames and if risk 'on' markets are going to rally more strongly, DXY should probably close below 103.72 by the end of May.

It has already retraced a little more than 62% of the decline from the top in 2001. It should also be noted that by this big picture chart USD is in a long cyclical bull market within a major long-term bear market. I don't expect the 2001 high to be taken out any time soon, if ever because I don't expect the current monetary regime (compliments of the Fed's ever more complex manipulation tool box) to last all that much longer.

Precious Metals
On the daily chart of gold we note that our 'best' downside support target of 1830 was taken out. We had an extensive NFTRH update on gold with daily through long-term views, and the relic ain't dead yet. But it did not hold at the preferred support level.

We have also been noting the flat seasonal and the non-constructive Commitments of Traders (CoT), which was not in 'no brainer' territory, but suffice it to say it is improving, and probably significantly since gold then tanked. Good stuff. 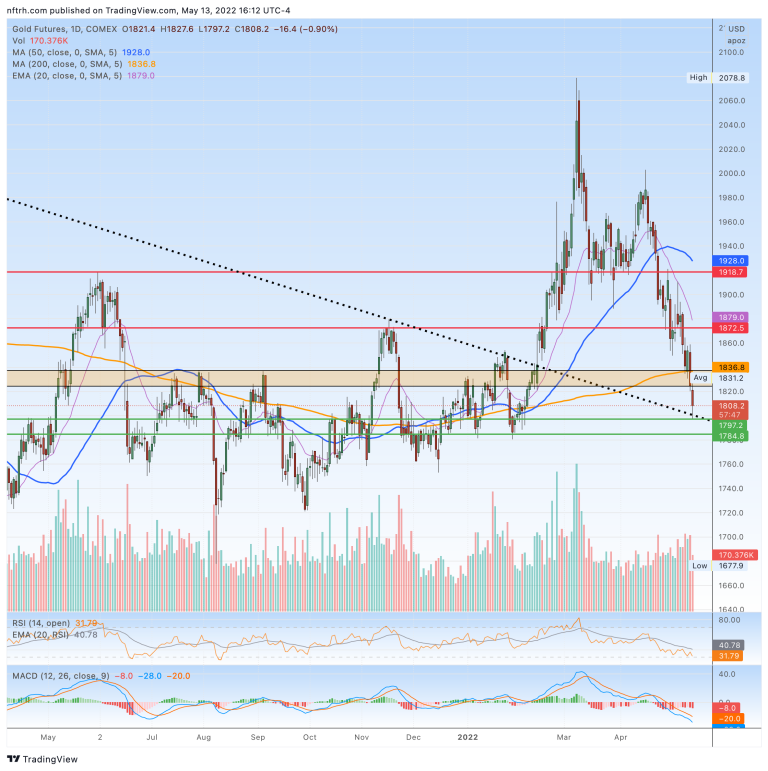 As for silver, it's in a poor seasonal period but the weekly chart (per an NFTRH update earlier on Friday) instructs that a very valid long-term support level was struck at 20.38. Combine this with a greatly improved CoT report and you have a nice area to take a shot with gold's wild little bro. Well, per the NFTRH trade log, I did anyway. 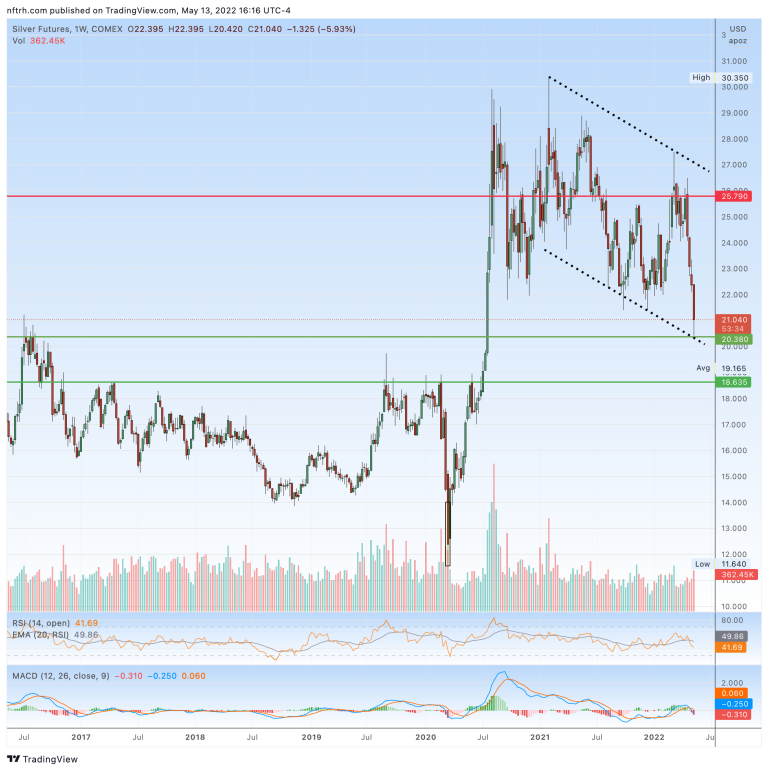 Here is the thing about the precious metals, including or even especially the miners (which we'll reserve for NFTRH 705 for the sake of keeping this supposedly general market summary from becoming a monster): the corrections often do not end at nice, neat support levels.

Silver for example tested and failed important daily chart support. Then it dropped through 'last ditch' daily chart support, and indeed still has a big resistance ceiling above it beginning at and around 22. The corrections often ends as bearish events as this relatively small area of the market tries to purge its trues believers.

Could silver drop to no brainer support at 18.63? Sure. But the odds – per sentiment/CoT and the current support level – are for a bounce/rally now.

Industrial metals and other more outlier commodities have been buckling under the bullish USD/hawking Fed 1-2 punch (and I supposed China Covid lockdowns make 3 punches). 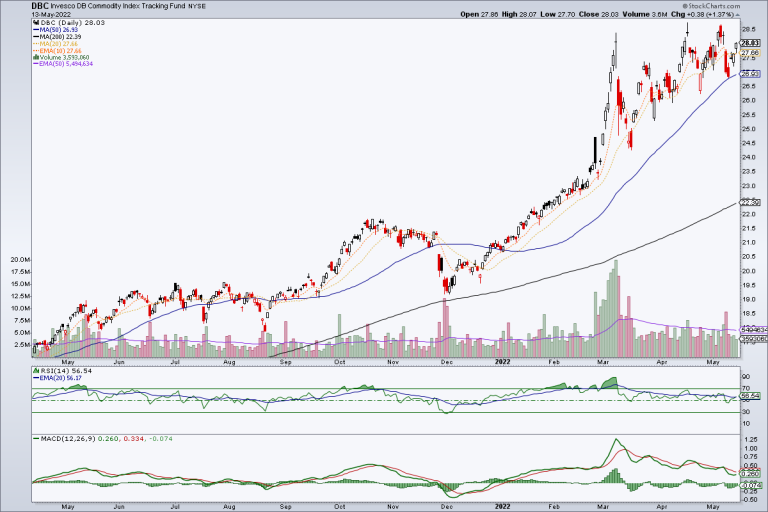 Energy and Agri commodities have been subject to global geopolitical supply issues (Captain Obvious wants you to know that) but in general when the factors like Covid, war and supply chain disruptions are worked through it will be left to inflation and inflation expectations to keep the commodity complex aloft. 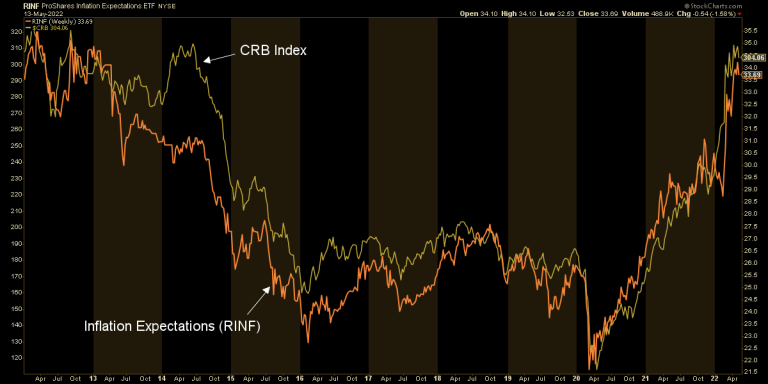 As yet (and it's currently still the end of CPI week), those expectations and the CRB index are well aligned and well elevated.

Bottom Line
With respect to inflation expectations, we can refer back to the bond market segment above.

Did the 30yr yield Continuum find a significant halt zone or will it break on through to the other side, a side that is decidedly and virulently inflationary?

One thing is for sure, if inflation expectations start to fade against the prevailing tide commodities will fade or even drop like a stone. If inflation sentiment and data persist, the coming year could see a new era of a commodity bull, a broken yield Continuum and a ramp to a crack-up-boom.

The above is a current status snapshot of several major markets of a macro in transition. That transition could either be a turn back from inflationary to disinflationary/Goldilocks or a flat out deflationary failure of inflated markets that were compliments of central bank panic policy circa Q1, 2020. Or the transition could be a morph to the most virulent kind of inflation.

I'll continue to respect the contrary signals in play (eg, counter-cyclical signals from Gold/SIlver, Gold/Copper, credit spreads and indeed the hard-bulling USD itself), pending any macro relief as illustrated above.

Using the S&P 500 as an example, stocks are – in order of probability – on a possibly significant bear market rally, on a small short covering bounce or finishing up an A-B-C correction to a major bull market with new highs ahead. I've been stopping and starting a bear bounce view for long enough now. Whether mini or maxi, I think it has begun.

The US Dollar is in a strong cyclical bull market within a very long-term bear market. If it corrects, asset markets may well go higher (watch the Gold/Silver ratio as well for any sign of correction as these two (USD and the GSR) would ride together to kill macro liquidity in a slaughter of the world's risk-on asset markets. They've already done some pretty solid damage.

Precious metals, meanwhile, lost support levels and are finally becoming bullish on a contrary sentiment basis. The play could be an oversold sentiment rally. Commitments of Traders have improved significantly and although we have not covered the miners in this article, note that the Gold Miner Bullish Percent index, a measure of oversold/overbought readings for gold stocks, has finally tanked to a low risk reading.

I am leaning to a rally in the precious metals as well despite recently battered technicals and incomplete fundamentals.