END_OF_DOCUMENT_TOKEN_TO_BE_REPLACED

"Backdoor" barometer shows signs of easing – but they may be temporary...

FOR THE first time in several years, the rate of growth in Los Angeles County food stamp use has fallen, writes Gregor Macdonald.

That's little consolation however given that total participation zoomed from just above 600,000 to over 1,000,000 people since the onset of the financial crisis. I've tracked the series as a backdoor view on rising energy costs and – in the case of LA County – gasoline costs in particular. 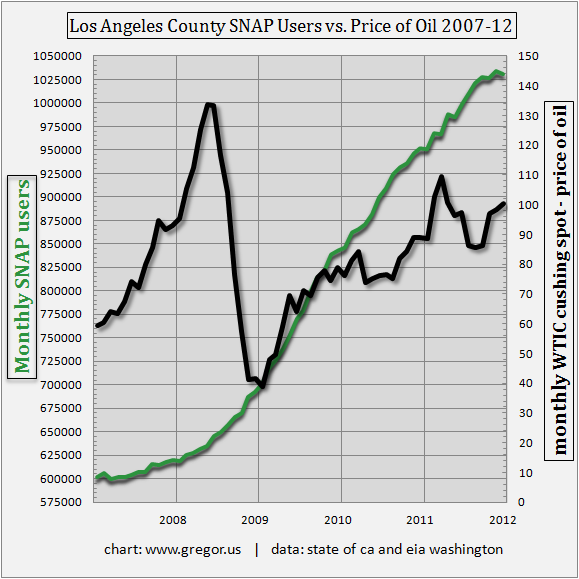 Because Americans have shed over 12% of their oil consumption since the peak demand year of 2005, one outcome is that the economy is less sensitive to gasoline prices. This is accomplished by a drop in automobile ownership by household, greater use of public transportation, and perhaps by an even steeper drop in automobile adoption as young people conclude it's pointless – and unaffordable – to maintain a car. Shall we conclude, therefore, that with recent strength in the US economy that food stamp use can actually fall, and will be less correlated with gasoline prices?

That depends. We know that automobile-rich Southern California is seeing the grand restoration LA's streetcar network. That opens up the possibility that for the first time in the post-war era, a new resident of LA could actually contemplate life-without-automobile.

However, if the next leg higher in gasoline prices unfolds, above $5.00 a gallon, it is hard to imagine that painful threshold will pass without effect. Gallup polling shows that Americans believe such prices levels would force significant changes in their lifestyle. And besides, while there has indeed been a resurgence of local rail and streetcar transport across the country, we are early in any such transition.

Finally, Los Angeles County, while it has its share of high-net worth individuals, is no doubt home to large populations who, because of income level, are hit harder when gasoline prices rise. The recent slowing of food stamp dependency may turn out to be temporary.

Looking to protect your wealth with a Gold Investment...