END_OF_DOCUMENT_TOKEN_TO_BE_REPLACED

And versus China. And so vs. Ray Dalio too...
BACK in January I showed how the price of gold rallied in the months following the 2015 and 2016 December interest rate hikes, writes Frank Holmes at US Global Investors.
http://www.usfunds.com/investor-library/frank-talk/could-stars-be-aligne...
Gold rose as much as 29% in the former cycle, 17.8% in the latter.
Gold ended 2017 up double digits, despite pressure from skyrocketing stocks and massive cryptocurrency speculation. 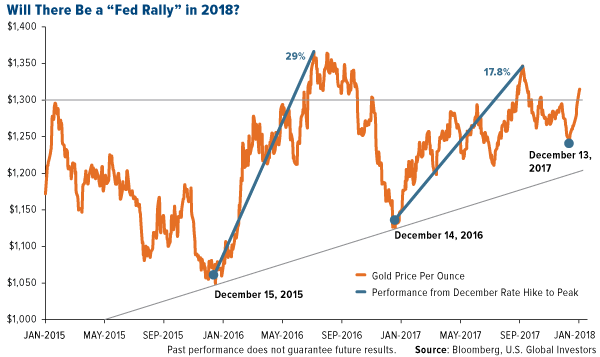 I forecast then that we could see another "Fed rally" this year following the rate hike in December 2017. Hypothetically, if gold took a similar trajectory as the past two cycles, its price could climb as high as $1500 this year.
As I told Kitco News' Daniela Cambone recently, I stand by the $1500 forecast. Before mid-March, investors might have been slightly disappointed by gold's mostly sideways performance so far this year. But now, in response to a number of factors, it's up close to 3% in 2018, compared to the S&P 500 Index, down 2.4%.
While I'm on the topic of equities, the S&P 500 dividend yield, for the first time in nearly a decade, is now below the yield on the two-year Treasury. Historically, the economy has slowed around six months after dividends stopped paying as much as short-dated government paper. This could spur some stock investors to trim their exposure and rotate into other asset classes, including not just bonds but also precious metals, which I believe might help gold revisit resistance from its 2016 high of $1374 an ounce. 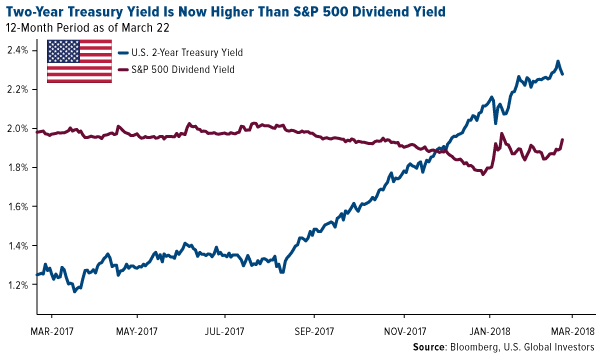 Volatility has also crept back into markets. It began with the positive wage growth report in February, implying the possibility of faster inflation. More recently, the CBOE Volatility Index (VIX), or "fear gauge," has surged on the departures of Gary Cohn as chief economic advisor and Rex Tillerson as secretary of state, as well as the application of tariffs on steel and aluminum imports.
Last month, President Donald Trump ordered tariffs on at least $50 billion of Chinese goods, stoking new fears of a US-China trade war. In response, the Asian giant proposed fresh duties on as much as $3 billion of US products, including wine, fruits, nuts, ethanol and steel pipes.
As I see it, there could be other contributing factors pushing up the price of gold. A good place to start is with Trump's recent appointment of former CNBC star Larry Kudlow as White House chief economic advisor.
Between 2001 and 2007, I appeared on Kudlow's various CNBC shows a number of times, and though he always struck me as highly intelligent, informed and accomplished – he served as Bear Stearns' chief economist and even advised President Ronald Reagan – it was clear he had a strong bias against gold.
This was the case even as the price of the yellow metal was on a tear, rising from $270 in 2001 to more than $830 an ounce by the end of 2007.
Kudlow showed his true colors toward gold as recently as this month, telling viewers: "I would buy King Dollar and I would sell gold." As you can see below, this has't been a prudent trade for more than a year now. 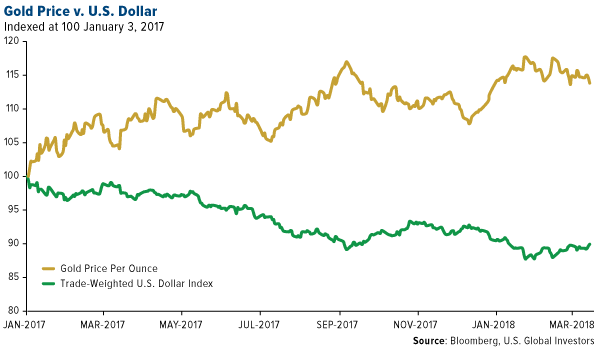 Earlier last month, Kudlow wrote that falling gold is good, as it "bodes well for the future economy." He said he agreed with a friend, who called the metal an "end-of-the-world insurance contract."
While there are those who would agree with him, it's important to remember that gold is used for much more than as a portfolio diversifier, and its price is driven by a number of factors. These include Fear Trade factors, from inflation to negative real interest rates, and Love Trade factors such as gift-giving during cultural and religious festivals. The precious metal has important industrial applications as well.
And since I first went on Kudlow's program, gold has outperformed the S&P 500's price action nearly two-to-one. Even with dividends reinvested, the market is still trailing the yellow metal.
So it's fine if gold isn't your favorite asset. But to dismiss it wholesale as Kudlow has again and again is, with all due respect, irrational.
Kudlow isn't just anti-gold, however. He's also anti-China, and even though he's traditionally opposed tariffs in general, he supports Trump's efforts to levy taxes on Chinese imports. Specifically, the duties are designed to offset the cost of intellectual property allegedly stolen by the Chinese over the past several years.
China's J-31 fighter jet, for example, is believed to be a knockoff of Lockheed Martin's F-35, the most expensive piece of US military equipment. It's for this reason that Lockheed's CEO, Marillyn Hewson, was present when Trump signed the authorization to impose new tariffs.
Our intellectual property is hugely important to the US economy. As important as steel and aluminum are, they account for only 2% of world trade, and in the US, it's even less than a% of gross domestic product (GDP). Technology exports, on the other hand, represent about 17% of US GDP.
That said, the implications of a trade war with the world's second-largest economy certainly have many investors concerned – all the more reason to consider adding to your gold allocation at this time. As always, I recommend a 10% weighting, with 5% in gold bullion, 5% in high-quality gold mining stocks and ETFs.
On a final note, we were pleased to have an old friend visit our office last month. Michael Ding, a veteran of the US Global investments team, joined us to share some laughs and his thoughts on what's happening in Asian markets right now.
Specifically, Michael said that Ray Dalio, founder of mammoth investment firm Bridgewater Associates, which manages around $160 billion, has become something of an economic guru for members of the Chinese ruling party's highest-ranking members, including Premier Li Keqiang. Dalio – whose most recent book, Principles, now tops China's bestseller list – is reportedly advising the country's top bankers and economists on how to deleverage safely without triggering a so-called "hard landing."
A trade war between the US and China, Ray Dalio said recently, would be a "tragedy".
So to put it in perspective: Whereas Trump has just now brought on Kudlow, the Chinese are leaning on a fellow American, Dalio, one of the smartest, most gifted money managers in the world – not just of our time but of all time.
Did Trump make the right call? Which player would you want on your team: Kudlow or Dalio? For my money, I would pick Dalio.