END_OF_DOCUMENT_TOKEN_TO_BE_REPLACED

Analyst Eric Coffin says the junior gold strategy of the last decade was a big error...
ERIC COFFIN is editor of the Hard Rock Analyst family of publications. Coffin has a degree in corporate and investment finance and has extensive experience in merger and acquisitions and small-company financing and promotion.
For many years, Coffin tracked the financial performance and funding of all exchange-listed Canadian mining companies and has helped with the formation of several successful exploration ventures. Coffin was one of the first analysts to point out the disastrous effects of gold hedging and gold loan-capital financing in 1997. He also predicted the start of the current secular bull market in commodities based on the movement of the US Dollar in 2001 and the acceleration of growth in Asia and India.
Now he says that, as the gold price rose upward over the last decade, junior miners chased ounces at all costs. This was a huge mistake, says Coffin, because it resulted in unexciting projects, low margins and a depressed market. Whereas, he explains here to The Gold Report, the essence of the junior gold miner should be new discoveries with high margins...
The Gold Report: Federal Reserve of Dallas President Richard Fisher gave a speech in Australia declaring that quantitative easing (QE) must end or it would "fuel the kind of reckless market behavior that started the global financial crisis." If the Fed isn't going to end QE until employment improves, how will this end?
Eric Coffin: Fisher gets to voice his opinion at Federal Open Market Committee (FOMC) meetings, but he won't be a voting member until January. He hasn't been comfortable with QE from the start and has said so repeatedly. There isn't any news in that quote.
I don't think you'll see much change when the FOMC gets four different members next year. Janet Yellen, who will become chairman, is more dovish than Ben Bernanke. I think she was the right choice, not because she loves creating money from nothing but because she's probably been the most accurate forecaster of the bunch.
TGR: What about the bubble that Fisher fears?
Eric Coffin: If you want to be cynical, you can make the argument that a bubble is exactly what the Fed has been trying to create. It wanted to get equity markets to go up because that increases wealth and raises consumer confidence. About half of the Fed's QE program is buying mortgage bonds. It is trying to keep mortgage rates down and resuscitate the housing sector.
Fisher is right in a sense, but I don't think we're at the point where I'd be terribly concerned about things running out of control. I have to admit, though, that based on the growth of the economy, the US equity markets are probably getting a little bit ahead of themselves. Most consumer inflation measures have been trending down, not up. Personally, I'm more worried about deflation, which is far harder for a central bank to fight than inflation.
TGR: The Q3/13 gross domestic product (GDP) report shows 2.8% growth.
Eric Coffin: Right now, I'm kind of neutral on the economy. The data quality is going to be crappy for a month or two because of the government shutdown. The economy grew 2.8% because there was big growth in inventories, which is not the reason you want. Without that it came in at 2%, which was the expected number. You're probably going to see production cut a little bit this quarter because more stuff was made than could be sold.
TGR: Karl Denninger pointed out that the gross change in GDP from Q2/13 to Q3/13 was $196.6 billion, but the Fed's QE program injected $255bn. So the economy actually shrank during Q3/13.
Eric Coffin: I think he's oversimplifying a little bit. QE is really swapping paper, creating money out of thin air and using that to buy bonds that inject money into the economy. But the velocity of money has been very low since the crash. It's not as if the banks are taking that $85bn per month and lending it all. That's where the real multiplier effect is. Right now a lot of the money created through QE has ended up in bank's excess reserves, not in the wider economy. Karl is a bit of a permabear, but I would agree with him that it wasn't that great a report.
TGR: Let's assume that QE continues at its present rate until June 2014. How will that affect gold and silver?
Eric Coffin: When the Fed starts tapering, we have to assume gold and silver prices will get hit. Of course, if it doesn't actually start tapering until well into next year, we could see gold and silver go up for two or three months before that. That doesn't preclude later increases in the gold price based on physical demand, but the short term traders are completely fixated on QE (or lack thereof) and will be sellers once the taper starts, and the market will have to get past that before recovering.
TGR: What if it becomes clear we are going to get QE forever?
Eric Coffin: Then I think gold goes to $2000 per ounce.
TGR: At the Subscriber Investment Summit in Vancouver last month, you compared the 10-year chart for gold prices, rising to 2011 and holding above 2010 levels today, to the 10-year chart for junior resources. The first chart looks good, but this second chart of junior gold miner stock prices looks terrible. Why? 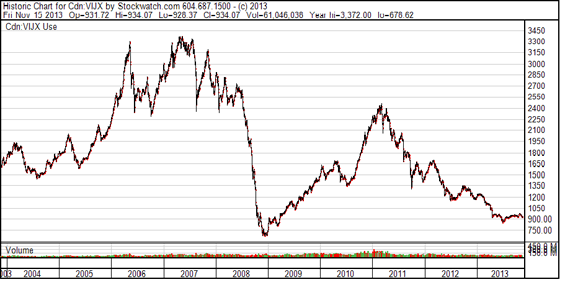 Eric Coffin: For all the money thrown at exploration – and, of course, that number has been tumbling dramatically for the past two years – not many good discoveries resulted, especially in the last couple years. That's one reason. The chart below shows the amount of gold discovered each year since 1990, counting only new gold discoveries above 2 million ounces. You can see how few discoveries there have been in the past couple years. Compared to the 1990s the numbers are tiny. 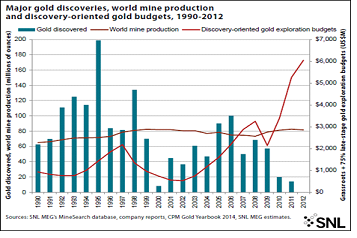 The other reason is that when the gold price was rising continuously many companies were looking for what I referred to in Vancouver as "crappy ounces". Their intentions were good. They weren't trying to hoodwink anybody. They made the reasonable assumption that with gold going up and up, economic cutoff grades would keep dropping. But you can't produce gold at ever-lower grades with difficult metallurgy and infrastructure and make more money.
As it turned out, costs rose almost in lockstep with the gold price. A lot of the ounces that were marginal at $500 or $700 or $900 per ounce haven't been salvaged by the gold price going to $1300 per ounce. Many of those resources are still uneconomic and would require more capital expenditures with longer payback periods than larger producers are willing to accept.
TGR: You said that junior gold miners have a major credibility issue, specifically, that preliminary economic assessments (PEAs) and feasibility studies do not match production realities.
Eric Coffin: There are a couple reasons for that. I've already mentioned costs. And when the gold mining sector recovered after 2000, there was a real capacity issue. There weren't enough geologists or engineers. There weren't even enough people who make truck tires.
Many NI 43-101s, PEAs and feasibility studies have been written by people who lacked experience. To be fair to the engineering companies, miners can have cost overruns of 20% and still be within the stated margin of error, but people never read the fine print. They just look at the production cost, so when it comes in $100-200 per ounce higher, everybody freaks out.
TGR: Juniors chased lousy projects because gold was soaring, and money flooded into the market. Now that gold has fallen 30%, will this engender the return of old-fashioned values?
Eric Coffin: I think it already has. The large mining companies, having spent huge amounts of money on capital expenses (capexes) that didn't add to their bottom line, are now saying, "Show me margin." Large and medium companies will now pick up deposits smaller than what they would have touched 10 years ago because they have the grades, the geometry and the metallurgy to enable low-cost production.
TGR: So is margin now more important than grade?
Eric Coffin: Grade is king, but margin is the key. Majors are focused on margin per ounce produced. You can get high margins with a lower-grade deposit if everything goes right but, by and large, the higher grade the better the margin should be. It comes down to net present value (NPV) and internal rate of return (IRR).
Companies now want gold projects that can be built for $100-150 million, with NPVs of $300m or $400m and all-in cash costs of $600-800 per ounce – assuming they're big enough. They don't want to go too small because they can spread themselves only so thin. I don't see majors picking up 50,000-ounce-per-year deposits, but we might see them picking up 100-150,000 per year projects, when a few years ago few majors would look at a deposit unless it was capable of generating 250,000 ounces per year or more.
In Sonora, Mexico, half a dozen mines that began production in the last five years don't have grade. They're 0.8, 0.7 or 0.6 grams per ton, but they have fantastic combinations of logistics, costs, workforces, metallurgy and geometry, and they produce at $500-700 per ounce cash costs.
TGR: Why are new discoveries so important to the junior sector?
Eric Coffin: That's what the juniors exist for. The market wants something new, with blue-sky potential. The companies with really big runs in the last year or two are, almost without exception, companies that made discoveries. They don't always work out, but that's the risk you take.
If you go back to the pretty spectacular bull market in the mid-1990s, it was driven by companies going international for the first time in a long time, juniors going to South America and Africa and finding 3, 5 and 10 million-ounce deposits. Gold prices rose in the mid-1990s, but discoveries drove the bull market.
TGR: Eric, thank you for your time and your insights.
Eric Coffin: You're welcome. I have a new report available for your readers that is free to download – it is actually an interview with one of the companies I'm tracking, which I think is a very worthwhile read. We also have a special subscription offer included in this report.