END_OF_DOCUMENT_TOKEN_TO_BE_REPLACED

Ben Bernanke's real message for gold investment needs translating...
WALTER J. "John" Williams has been a private consulting economist and a specialist in government economic reporting for more than 30 years.
John Williams' early work in economic reporting led to front-page stories in the New York Times and Investor's Business Daily. Today his economic consultancy is called Shadow Government Statistics, better known as ShadowStats.
And here, in this interview with The Gold Report, John Williams says his corrected economic indicators show the US is nowhere near a recovery. In fact, the Federal Reserve will have to increase rather than decrease bond buying to prop up the banks and push off inevitable Dollar debasement.
That could be very bad for savers, but good for gold investment, he believes...
The Gold Report: Last week Ben Bernanke said the US Federal Reserve might begin tapering quantitative easing by the end of the year based on signs of an improving economy. Gold immediately dropped from $1347 an ounce to $1277, the lowest price in more than two years. The Dow Jones Industrial Average and Nasdaq were also off more than 2%. Yet you called this "jawboning" and said that due to stresses in the banking system the Fed would be obliged to continue bond buying. Why would the central bank threaten to cut off the flow if it didn't plan to do it?
John Williams: All the hype over the Fed's so-called tapering is absolute nonsense. Fed chairman Ben Bernanke said the Fed's pulling back of quantitative easing was contingent on the economy recovering in line with the Fed's relatively rosy projections. He also indicated, however, that if the economy worsened, he would expand quantitative easing. When you consider that the official Fed projections are grossly optimistic, the conclusion is that we will have more, not less, bond buying from the government.
The jawboning was a multifaceted attempt to placate the Fed's critics, while soothing the stock and bond market jitters at the same time. The comments, however, hammered equities and bonds, as well as gold. The negative impact on gold investment likely would have been viewed as a positive result by the Fed.
The banking system nearly collapsed in 2008. The federal government and Federal Reserve took extraordinary measures to keep the financial system from imploding. Those actions prevented an immediate systemic collapse, but they did very little to resolve the underlying problems. I contend that we're still in recession, with the economy deepening into a renewed downturn. At the same time, the banking system solvency problems continue. Little has changed in the last five years.
The purported nature of the quantitative easing is a fraud on the public. While Bernanke describes the extraordinary accommodation in terms of trying to stimulate the economy, lowering the unemployment rate and attaining sustainable economic growth in the context of mild inflation, those factors are secondary concerns for the Fed.
The US central bank's primary function always has been to assure banking system solvency and liquidity. All the easing efforts have been aimed at the banking system. The flood of liquidity spiked the monetary base, but it has not flowed through to the money supply and ordinary people.
Simply put, the Fed is propping up the banking system. Bernanke is using the cover of a weak economy to do that because the concept is not politically popular, but it's what the Fed has to do because the underlying system is just as broken today as it was in 2008.
TGR: Let's go back to your statement that the economy is doing worse rather than better. Didn't positive housing start statistics and consumer confidence numbers just come out? How do you know if the economy is getting better or worse?
John Williams: Housing starts are still down 60% from their peak. Based on the first two months of the second quarter, housing starts are on track for a quarter-to-quarter contraction, a rather substantial one. Industrial production also is on track for a quarterly contraction.
These indicators easily could foreshadow a contraction in the current quarter's gross domestic product. The underlying economic issues remain, as in 2008, with structural constraints on consumer liquidity and banking system stability. With those ongoing, fundamental weaknesses, there has been no basis whatsoever for the purported economic activity since 2009, or for a recovery pending in the near term.
The consumer directly drives more than 70% of GDP activity. Indirectly, the consumer impacts the balance of the economy. To have sustainable growth in consumption, there needs to be sustainable growth in liquidity, reflected in income and, ideally, supported by credit. Instead, household income is shrinking and traditional consumer credit is heavily constrained.
Headed by two former senior Census Bureau officials, SentierResearch.com publishes monthly estimates of median household income adjusted for the government's headline CPI inflation number. Those numbers show that household income plunged toward the end of the official economic downturn. Officially, the recession went from the end of 2007 to the middle of 2009, but the reality is that household income kept plunging after the middle of 2009.
Income hasn't recovered. Right now, it's flat and bottom-bouncing at the low level of activity for the cycle. 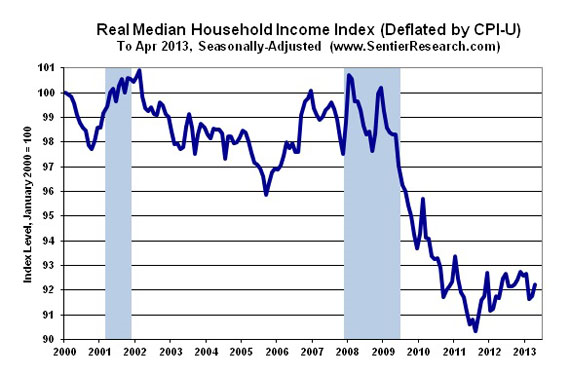