END_OF_DOCUMENT_TOKEN_TO_BE_REPLACED

Bad news for jobs, great for stocks...
The NOVEMBER unemployment report came out, writes Brian Maher, managing editor of The Daily Reckoning.
A Dow Jones survey of economists had projected 440,000 new November jobs. The actual figure?
245,000 – a mighty "miss".
Thus our deep disfaith in the crystal-gazing of experts is affirmed...again.
"Overall, it is a disappointing report," said economists at Jefferies by way of understatement, explaining:
With Covid cases surging again and policies being put in place to try and slow the spread, hiring has slowed down. Also, worker availability is a significant limiting factor as well, with many unable to go to work due to Covid concerns or family care obligations.
"Today's report is a firm reminder that we're not out of the woods yet," adds Daniel Zhao, senior economist at Glassdoor.
"Even with a vaccine on the horizon," he continues, "many are bracing for a long winter ahead."
Just so.
Yet Wall Street is bracing for winter in the tropics...soaking sunshine, loafing poolside and sipping frozen drinks.
A CNBC headline earlier on Friday:

"Dow jumps more than 200 points to a record even after a big US jobs report miss."

The Dow would rise 248 points by the closing whistle...to a record 30,218. The S&P would establish its own fresh record, ending the week at 3,699.
"Dow: Next Stop 40,000," reads another headline from the financial opinion mills.
Would you have believed it in March?
CNN's "Fear & Greed Index," meantime, reads 88/100. Any reading over 75 flashes "extreme greed".
And by one metric – the Shiller CAPE ratio – stock market valuations are loaded into what our former colleague David Stockman labels "the nosebleed section of history."
Dr.Shiller's CAPE ratio presently reads 33. What is its historical average? 16.
Only three instances in United States history did CAPE exceed 30 – immediately preceding the Crash of '29, prior to the 200-2001 dot com bloodletting – and in 2018.
Never before has the stock market towered so high above the economy that supposedly supports it.
Is the stock market amok because it is "discounting the future?" That is, because it spots clearing economic weather ahead?
Well, can we please see the satellite imagery? We are far from convinced it exists.
Meantime, widespread lockdowns are in prospect as the virus runs riot. And the economy may well plunge into recession this winter.
Why then has the stock market vaulted to record heights once again?
You are aware of the Federal Reserve's zero interest rates. You are aware of its wildly inflated balance sheet...and how they combine to goose markets.
Yet have you considered the stimulating effects of the M1 money supply?
The M1 money supply – cash, coins, checking accounts, traveler's checks, demand deposits – is the most liquid money supply.
M1 money supply has geysered 44% since March. Let Exhibit A go into the record (drafted in October when the figure was 40%.): 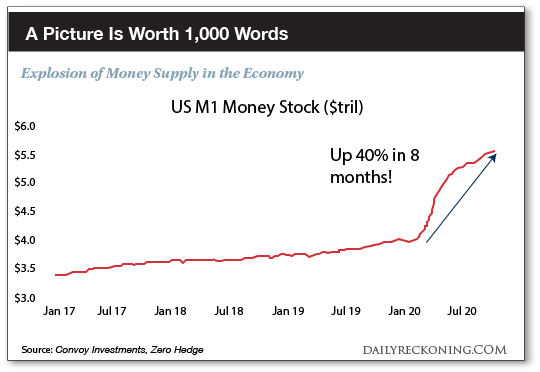 Yet the great money deluge has been channeled away from the real economy. The consumer price index – for example – has increased only 0.5% across the same space.
To emphasize: The money supply has surged a delirious 44%. Yet prices have scarcely budged a jot.
Where have the floodwaters flowed? You know the answer of course.
Mr.Howard Wang of Convoy Investments:

"While it can seem like the lack of inflation gives the government a free pass to print, the printing is not without consequences. The money is flowing through to higher financial inflation...
"The 40% increase in money supply didn't go into the real economy, but sloshed all around the financial markets...More money chasing fewer assets means higher prices, and vice versa. "This year has been an extreme example of how if you print enough money, you can increase asset prices under virtually any circumstance."

We believe there is justice in his conclusion.
Meantime, Dr.Jeremy Siegel professes economics at the famous Wharton School of Business. He too credits the flooding M1 money supply:
"I don't just mean reserves added by the Federal Reserve, I mean the M1 money supply, up 44% since the beginning of March. We have not seen that since World War II."
World War II concluded 75 years ago.
Yet by the Federal Reserve's own admission, the monetary and fiscal authorities are pursuing a policy course for the first occasion in 90 years...
A "three-pronged" policy.
The United States Treasury forms prong #1. It has emptied in some $3 trillion of fiscal "stimulus" through direct payments and loans.
Prong #2 is the Federal Reserve's 0% interest rates.
Prong #3 is the same Federal Reserve's roughly $3 trillion of quantitative easing.
Combine one with the other two, and what do you have?
You have Dow 30,218...you have S&P 3,699...you have Nasdaq 12,664.
United States stocks are up 56% since March. Technology stocks in particular are up 73%.
Yet stocks are not the only assets up on the rising tide. Cryptocurrencies sit even higher in the water...
Bitcoin up 217% since March. Litecoin up 131%. Ethereum up a dizzying 362%.
Are we witnessing another cryptocurrency bubble? The aforesaid Howard Wang:

"The combination of massive printing and historically low rates is producing bubble like behavior in many markets like crypto-currencies, much like in 2017. Of course in 2017, the Fed began to withdraw liquidity and crushed many of those asset bubbles."

Will the Federal Reserve begin to withdraw liquidity in 2021?
We do not believe it. The economy requires too much watering.
Liquidity will continue pouring into stocks, cryptocurrencies and other assets.
Yet bubbles will only expand so much. And so the Federal Reserve finds itself in a corner...
Drain the fluid, and the stock market drains away with it. Keep it flowing, and the bubble swells to obscene dimensions, courting a great conflagration.
So...what can you expect from the stock market in 2021?
Will the bubble continue expanding...or not?
Citigroup runs a market soothsayer labelled the "Panic-Euphoria" indicator.
When panic is rampant, when the streets are deep with investor blood, odds are excellent the next twelve months will deliver positive returns.
The dynamic inverts under euphoria...when spirits are up...and guards are down. The odds are excellent the next twelve months will deliver negative returns.
What then are the odds that you will profit in the stock market over the next 12 months?
Tobias Levkovich, Citigroup's chief US equity strategist:

"Current euphoric readings signal a 100% probability of losing money in the coming 12 months if we study historical patterns."