END_OF_DOCUMENT_TOKEN_TO_BE_REPLACED

Implications for precious from Aug's NFP...

Earlier months were also marked by downward revisions. Does it send a signal to act for the Fed, and what is gold likely to do in return?

While the gains were widespread, it was the professional and business services (+37,000), government (+34,000), and education and health services (+32,000) that took the lead. Retail trade, mining, utilities, and transportations cut jobs.

Moreover, the headline number was accompanied by downward revisions in July and June. Counting these, employment gains in these two months combined were 20,000 lower than previously reported.

Although the pace of hiring has slowed (see the chart below), the US economy is still creating jobs at a reasonable pace. This job creation kept the unemployment rate again at 3.7%, near a 50-year low. It means that the US labor market is likely to further contribute to the longest expansion on record, at least for the time being.

Here's the change in thousands of persons in US non-farm payrolls (red bars, left axis) versus the unemployment rate (green line, right axis, per cent) from August 2014 to August 2019. 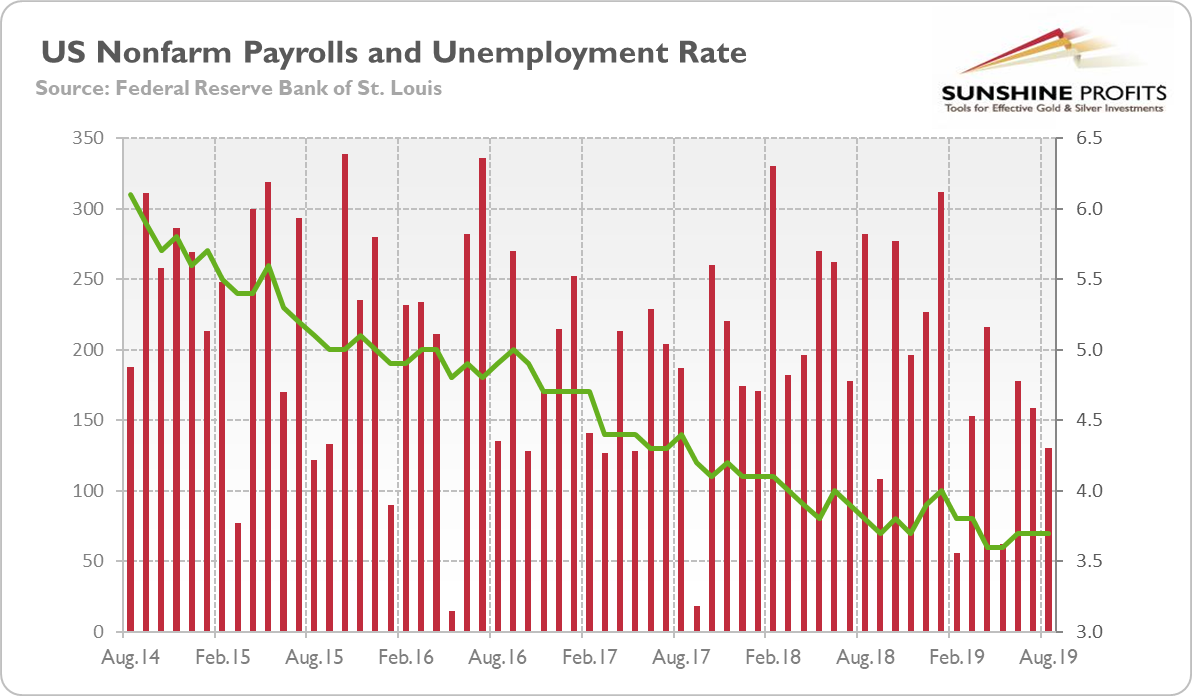 Simultaneously, more people entered the labor force in search of work. The labor force participation rate edged up from 63.0 to 63.2% in August, and the employment-population ratio also increased slightly from 60.7 to 60.9%.

The average earnings for all employees on private non-farm payrolls also rose, up by 11 cents to $28.11 per hour, which implies wage inflation at 3.2%, a slight drop from 3.3% in July.

Hence, the US labor market is strong and fuels record-long expansion. From the macroeconomic point of view, the domestic economy is thus still doing relatively well. This is bad news for the gold bulls.

Still, some analysts consider the recent Employment Situation Report as weak. August's non-farm payrolls marked the smallest increase in three months, indicating a slowdown in hiring amid the trade wars with China and the resulting disruptions in the global economy.

The soft employment figures are expected to keep the Fed on track to cut interest rates, which should be good news for the gold bulls. According to the CME FedWatch Tool, there is almost 90% chance that the FOMC will trim the federal funds rate by a quarter-percentage point following its meeting later this month.

However, the initial estimate of non-farm payrolls is not very reliable in August, because many people are on vacation and the number of respondents to the government's questionnaire is often the lowest one of the year.

Moreover, the Fed's Jerome Powell said last Friday that the most recent monthly gauge of the US labor market fits into an overall picture of a healthy jobs market and economy.

"Incoming data for the US suggests that the most likely outlook for the US is still moderate growth, a strong labor market, and inflation continuing to move back up."

Therefore, one should not read too much into the recent non-farm payrolls. The slowdown is normal at this stage of the business cycle and it does not forecast recession yet.

Given the high market odds, the Fed might deliver another interest rate cut in September, but the action will be caused more by the Trump's pressure and the recessionary fears stemming from the inverted yield curve that from the state of the US labor market.

It means that the recent employment data does not have to move significantly gold prices. However, as we are arguably in the later innings of the business cycle, its turning would work to make the yellow metal shine.