END_OF_DOCUMENT_TOKEN_TO_BE_REPLACED

Why Buy Gold? The Bank of Japan is printing two in every ¥3 of Tokyo's new government debt...

THE JAPANESE BANKING CRISIS of the 1990s and early 2000s had roots similar to the American crisis today, writes Gary Dorsch of Global Money Trends.

A stock market and real estate bubble both burst, leaving banks holding $450 billion in loans that were virtually worthless. Japan's "lost decade" of growth followed, providing powerful evidence of the danger of allowing deflation to emerge and persist.

Under deflation, profits shrink, investment dries up, and consumers spend less in anticipation of even further cuts in prices. And deflation is very hard to remove.

Japanese wholesale prices in February 2009 were 1.1% lower than a year earlier, the first annualized decline in six years, putting Japan on course for its second bout of deflation since mid-2000s. Japan's economic output contracted at an annualized 12.1% rate in the fourth quarter, meantime, its fastest rate of decline since the 1974 oil shock, shrinking about twice as fast as the United States and the Eurozone due to its heavy reliance on exports – exports which sank by almost one-half last month, driven down by the sharp rise of the Japanese Yen.

After Japan's stunning 10% drop in industrial output in January, a similar GDP contraction in the January-March period is expected, as the global downturn intensifies. Fearing that a sliding stock market will erode the capital of the Japanese financial sector, the Bank of Japan has devised a dual scheme to buy ¥1 trillion of stocks directly from banks, and a separate plan to buy ¥1 trillion yen ($10 billion) of subordinated bank debt, in order to bolster their capital bases, and prevent a drought in lending to companies and households in need of cash. 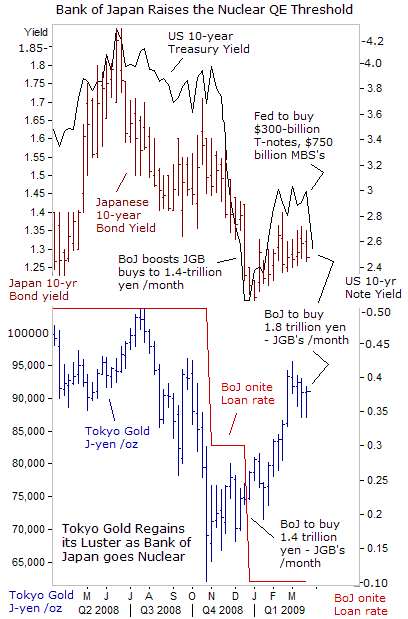 On March 18th the Bank of Japan, the original pioneer of "Quantitative Easing", raised its nuclear threshold.

It signaled a plan to monetize a record ¥1.8 trillion ($18.3bn) of Japanese government bonds (JGBs) each and every month, up from ¥1.4trn previously. Effectively, across the fiscal year as a whole, the Bank of Japan will monetize two-thirds of Japan budget deficit – projected at ¥33 trillion – as the government prepares more spending to cushion the country's worst recession since World War II.

Not surprisingly, the Bank of Japan has held its overnight interest rates steady at 0.1%, squarely within the Fed's targeted range of zero to 0.25% for the fed-funds rate. And most importantly, throughout this decade, the Japanese central bank has displayed its virtual mastery over the world's second largest bond market, with $8.7 trillion-worth of JGB's outstanding, by locking the 10-year Japanese yield within a very tight range between 1.20% and 2.00%, much to the dismay of Japanese fixed income investors.

One of the biggest out-growths of the BoJ's fixation with the Hallucinogenic Quantitative Easing Drug and ultra-low interest rates, was the spawning of a $7 trillion "yen-carry" trade. It vastly inflated global stock markets worldwide, and – in the end – boomeranged on the Bank of Japan when the carry-trade unwound, propelling the Japanese Yen to 16-year highs against the dollar and driving the Nikkei-225 index to 26-year lows.

Another unintended consequence of the Bank of Japan's overdosing on the QE-drug, has been the multi-year bull market for Tokyo gold, which tripled in value in Yen terms. Repeating the same mistakes of the past, the Bank of Japan's 0.1% loan rate and newly-boosted JGB purchases have sent the Gold Price in Yen from below ¥2,000 per gram in October to above ¥3,000 in late Feb., compliments of the BoJ's money printing machine. 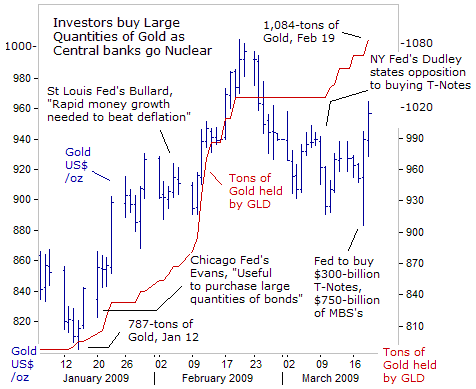 This rate of monetary debasement explains why the world's largest gold-backed exchange-traded fund, the SPDR Gold Trust, traded in New York, has seen its holdings rise to a record 1,114 tonnes, up more than 40% from the start of the year.

Because with increasing regularity worldwide, central bankers are engaged in the most extraordinary currency devaluations ever witnessed. The results of these interventions could be heightened currency volatility and stock market instability.

While the Fed can afford to open the monetary flood gates now, when the economy does recover, it puts a great deal of weight on hard-core inflationists knowing how to tighten again.

They were supposed to do something similar in 2003-05, but instead, former Fed chief "Easy" Al Greenspan kept interest rates submerged too low for too long. The Greenspan Fed's decision to open the monetary spigots inspired a global commodity boom unlike any since the 1970s. A massive housing bubble also developed, feeding the sub-prime mortgage debt bubble, which ultimately burst, and led to the worst financial crisis and economic contraction since the Great Depression.

Wall Street sees the Fed's re-inflation efforts as a quick-fix to ease debt burdens and perhaps stabilize housing values. Congress and the White House see a way to issue $2 trillion of debt without having to pay the penalty of sharply higher interest rates. But gold bugs are focused on the big picture, and are steady buyers of the yellow metal.

Peter Munk, chief of Barrick Gold, explained on March 18th, "I happen to be very optimistic right now about Gold Prices. I think they are going to be significantly higher than last year.

"As the world becomes less and less secure in terms of normal investments, and people lose faith and confidence in bonds, stocks, secured debt instruments, people turn to gold. It automatically attracts people in direct proportion to their fear, and that is fear of losing their money."