END_OF_DOCUMENT_TOKEN_TO_BE_REPLACED

After ¥120 trillion of BoJ liquidity, the Dollar is unchanged vs the Yen...

NEARLY 18 months ago, on the evening of Friday, 31 October 2014, the Bank of Japan shocked the markets, saying it would increase the size of its purchases of government bonds by ¥15 trillion ($135 billion) to about ¥80 trillion ($725 billion) in total annually, writes Gary Dorsch at Global Money Trends.

BoJ chief Haruhiko Kuroda said the increase was required to prevent a reversal into a "deflationary mindset" that the country's leaders contend has stymied growth for many years. Countering such a trend is "the most important thing we can do," Kuroda said. "Whatever we can do, we will."

In a knee-jerk reaction, the Nikkei-225 stock index jumped +4.8% by the closing bell in Tokyo to close at a seven-year high and the US Dollar rose 2% to ¥110.75 after the unexpected decision, its best level since January 2008, lifting Japanese exporters' stocks.

At the same moment, the Federal Reserve was ending its own radical scheme of bond purchases, known as quantitative easing, which it instituted after the global recession to help the US stock markets recover. After three rounds of QE, the Fed had pumped $3.7 trillion of fresh Dollar liquidity into the global markets. The market also got a boost from news that Tokyo approved targets for the $1.2 trillion Government Pension Investment Fund (GPIF) which aimed to increase the ratio of Japanese shares in its holdings to 25% form the previous 12%.

As such, Tokyo was determined to drive the Yen's exchange rate lower by flooding the markets with freshly printed Yen. The BoJ had already owned 20% of Japan's $11-trillion bond market, and the scale of its buying suggested the BoJ could end up owning half of the JGB market by as early as in 2018. 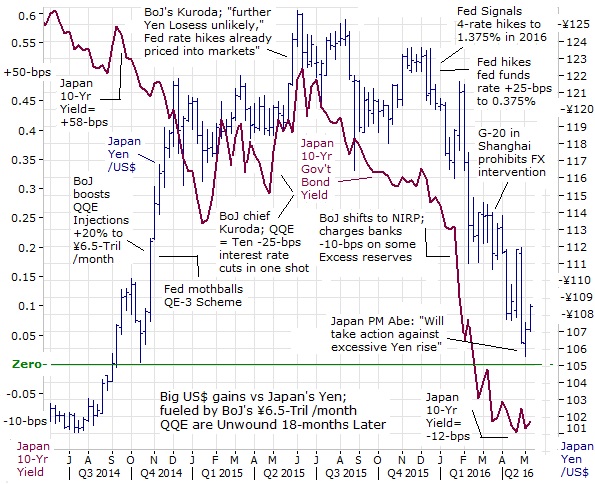 However, six-months later, the US Dollar had clearly lost its upside momentum after reaching a 13-year high near ¥125. On 10 June 2015, BoJ chief Kuroda was proclaiming victory over the "deflation mindset", adding that the Japanese "economy [was] on the right track" and "QQE is working."

The US Dollar had risen to ¥125.86 – its highest since June 2002. Mr.Kuroda said there was "no doubt" that QQE – quantitative and qualitative easing – was having its desired effect.

"The policy effects of QQE are such that they are roughly equivalent to those that would arise from making almost ten -0.25% rate cuts in one shot under conventional monetary policy."

However, reacting to political pressure from neighboring China, South Korea, and the US, Tokyo sought to put a lid on the US Dollar's advance. Speaking to Japanese lawmakers on 10 June 2015, Kuroda sent a signal to currency traders, saying the US Dollar was not bound to rise against the Yen, even if the Federal Reserve raises interest rates, because FX traders may have already priced into the market the possibility of a series of Fed rate hikes.

"It's hard to conclude decisively that the Dollar will continue to strengthen further just because the Fed has done tapering and eyeing raising interest rates."

Instead, Kuroda said it was desirable for the Yen to trade in a range that broadly reflects economic fundamentals. And for the next six months, the US Dollar behaved nicely, gyrating within a narrow range between ¥118 and ¥122, much to the satisfaction of Tokyo's financial warlords.

The currency fell against all 16 of its major peers after Japan's central bank voted 5-4 to apply an interest rate of minus -0.10% to current accounts held at the central bank, and sent shock waves through currency markets. The move raises the specter of further easing by other central banks in the Euro zone, Switzerland and Sweden that had already lowered their deposit rates below zero.

In a knee-jerk reaction, the US Dollar jumped +2% to ¥121.18 and the Euro rose +1% to ¥131.31. Signs of a renewed recession in Japan and advice against the bank's ability to expand its already sizable asset-buying program amid liquidity concerns are also seen contributing to the move.

Central banks use their deposit to influence how banks handle their reserves. In the case of negative rates, central banks want to dissuade lenders from parking cash with them. The hope is that they will use that money to lend to individuals and businesses, which in turn will spend the money and boost the economy and contribute to inflation. It is also aiming to force investors to shift money out of bank accounts and into higher-yielding assets.

However, two weeks later, on Fri Feb 12th, 2016; it had become apparent that the BoJ's shift to negative interest rates had backfired. Japan's Nikkei share average fell more than -5% to a fresh 16-month low, and was set for its biggest weekly drop since 2008 as investors rushed to dump risky assets after the Dollar dived to a 15-month low against the Yen.

The US Dollar fell as low as ¥111, its lowest level since October 2014 – when the BoJ first boosted its QQE scheme to ¥6.5-trillion per month. Traders said that investors feared Japanese exporters hopes of earnings growth would suffer if the Yen strengthens further. Automakers were hammered, with Toyota Motor Corp (7203.T) falling -6.5%, Honda Motor Co (7267.T) dropping 4.8%.

According to analysts at Nomura Securities, when the Dollar falls by ¥1, it cuts Japan's corporate pretax earnings by 0.4% to 0.5% and pushes down the Nikkei share average by 400 points.

By April 7th, senior government officials were escalating warnings to speculators against pushing up the Yen too much, stressing their readiness to take "appropriate action" in the market against what they see as one-sided moves. The Dollar hit a fresh 17-month low of ¥107.70, but the jawboning has failed to stop market participants from testing policymakers' resolve with many betting Tokyo will not intervene unless the Dollar falls below ¥105.

A Group-of-20 agreement in Shanghai signed in February prohibited countries from competitive currency devaluations, which makes it difficult for Japan to intervene. Japanese financial bureaucrats dismiss such a view, pointing to other parts of the G-20 communique that reserve Tokyo's right to intervene if the Yen rises too sharply, namely a part that warns against "excessive volatility".

Yet after nearly ¥120 trillion of liquidity injections since October 2014 under Japan's hyped QQE scheme, the US Dollar is trading at the same levels that prevailed 18 months ago. Roughly $5.1 trillion of Japanese government debt is yielding less than zero, yet the US Dollar continues to remain weak against the Yen, confounding analysts and traders alike.

Mr.Kuroda argued QQE would be instrumental in generating "a virtuous cycle" in income and spending for both corporations and households, leading to a "significant turnaround" in the economy. However, nearly one year later, Japan's exports fell for a sixth straight month in March as slowing growth in China, soft demand for electronic components (for products such as the iPhone), and a strengthening Yen have pushed Japan's economy back into a recession.

Despite the zigzags in growth last year, Japan's economy eked out a paltry +0.4% expansion in 2015, after flat-lining of 2014. But that pace of growth falls far short of the expansion needed to achieve Abe's goal of a ¥600 trillion ($5.3 trillion) economy by 2020. The Ministry of Finance said Japan's exports fell -6.8% in the year to March. Exports to Asia, which account for more than half of Japan's shipments, fell -9.7%, portending a second straight quarter of economic contraction, and a return to recession in Q1 of 2016.