END_OF_DOCUMENT_TOKEN_TO_BE_REPLACED

What's bad for the Euro dents gold in USD...

ITALY is on the verge of causing another 2012-style sovereign debt crisis, writes Dan Denning, co-author of The Bill Bonner Letter.
https://bonnerandpartners.com/how-the-government-became-a-deep-state-pup...

Only this time, it could mean a deeper political crisis for the European Union itself.

At the heart of that crisis is the Euro. That's what makes the Italian story relevant for investors worldwide...including here in America.

In the recent Italian elections, the anti-establishment Five-Star Movement and the League (which the popular press describes as anti-immigrant) finally got together.

Both parties have made noise about reclaiming Italy's monetary sovereignty. In other words, either having control of their own interest rates or getting out of the Euro.

They haven't done anything formal yet. But the suggestion that Italy could leave the Euro will weaken the Euro. That means you're going to see a much stronger Dollar this summer. We're already starting to see it. 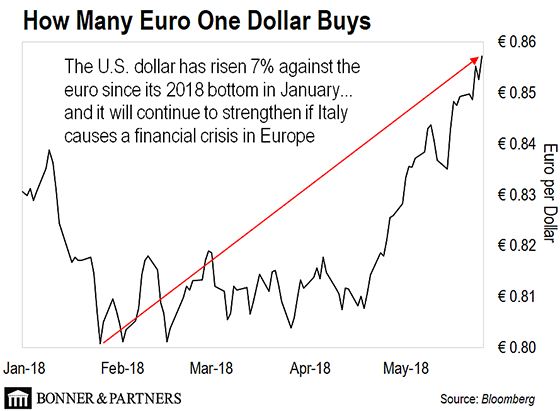 The situation in Italy would also have implications for gold.

Gold was trying to get above $1400 an ounce. That probably won't happen now. Because this Italian development should see the Euro decline against the Dollar, and that's bearish for gold.

But safe-haven buying should help keep gold from declining too much (in Dollar terms).

I mention all of this because it's not always obvious how something that happens in a politically dysfunctional country thousands of miles away can affect your investments. But it can.

And if the Italian crisis continues to escalate, we could see a second Euro crisis like we saw in Greece in 2012. The same thing that happened then could happen again.

Capital would flow back to safe havens and liquid assets. In the past, that usually meant US government bonds and big-cap stocks.

That's why the rise in US rates is worth noting now. If capital was fleeing the Eurozone, US rates ought to be falling. They're not.

That means there's no crisis yet. But stay tuned.

If Italy becomes the latest crisis at the fringes of the world's financial system, it WILL make it back to the US.

Time will tell if that happens. For now, Italy's President Sergio Mattarella has bowed to pressure from the bond market and essentially vetoed the formation of a new anti-Euro government. News reports say the key issue was the appointment of a confirmed Euro-sceptic, 81-year old Paolo Savona, as economics minister.

Savona had drawn up a plan, which he calls a Plan B for leaving the Euro currency. Mattarella told Italians that any such plan should be openly discussed with the voters before an election, and that the resulting rise in Italian bond yields (relative to German yields) would make Italy's public debt problem even worse than it already is.

In other words, the bond vigilantes, the Germans, and the European Union are calling the shots in Italy, not the Italian voters.

This is why the power to control money is so important to the people who have it. It's a political power, too. It's more powerful than the ballot itself.

In the meantime, Italians may have to go back to the polls this summer. If they turn out in even greater numbers for the Five Star Movement and the League, then the crisis in Italy – a founding member of the European Union, and the third-largest economy in Europe – will be back with even more force. Stay tuned.

But to restate, at least in the short term I would expect to see a stronger Dollar, a lower gold price, and a weaker Euro on fresh Italian trouble.