END_OF_DOCUMENT_TOKEN_TO_BE_REPLACED

If the US attacks Iran, the only winners will be gold and energy investors...


JUST WHAT are the risks posed to the Dollar by the threat of US military action against Iran? Gold investors would be well placed to weather the storm as oil prices shoot above $100 per barrel, says David Galland – managing editor of BIG GOLD from Casey Research...


TO MOST PEOPLE, the United States attacking Iran would be extremely foolishness. And that’s putting it charitably.

Not that the US would face defeat, of course – at least, not in military terms. The precarious position of the US armada in the Persian Gulf, whose narrow shores are crowded with all kinds of ship-killing missiles, including the deadly Chinese C-802 with its 98% hit rate, all but assures a loss of American life – perhaps on the scale of Pearl Harbor. But the Iranians, like the Japanese in WWII, would have no real chance of prevailing.

The United States military could perhaps lose the initial battle for the Persian Gulf. But it would certainly win the short conventional war that would follow.

This assessment, however, doesn’t mean the US would come out ahead in the long run. As the minor-league skirmish in Iraq demonstrates every day, boots on the ground – a prerequisite to proclaiming victory – can quickly become muck-bound.

The only real winner in fact, should hostilities break out, would be investors in precious metals and energy plays. Here's why.

The true cost of war

The upside for oil prices during a shoot-out with Iran is clear. There are several reasons to believe that gold and silver would also rally, and strongly so.

One reason, of course, is the long and unblemished history of the precious metals as crisis hedge. Another, less obvious reason, is expanding the Iraqi war could very well be the proverbial straw that breaks the back of the US Dollar.

Less metaphorically, the direct and indirect costs associated with fighting Iran would hurry along the monetary crisis that is already inevitable.

War is never cheap. The price tag on the Iraq War alone is already estimated to total more than $2 trillion by the time the desert sands eventually settle.

The cost of expanding the Middle East war to Iran – which would by the way, invariably boomerang back to the 'new' Shi’ite-controlled Iraq, as well as Muslim populations from Pakistan to Indonesia and everywhere in between – would put immense pressure on the US Treasury. The raging river of US deficit spending would, almost overnight, turn into a Niagara Falls.

Especially as the war – which, given its scope, could rationally be called WWIII – would be accompanied by upward-spiraling oil prices. And as the chart below shows, gold tracks oil fairly closely. 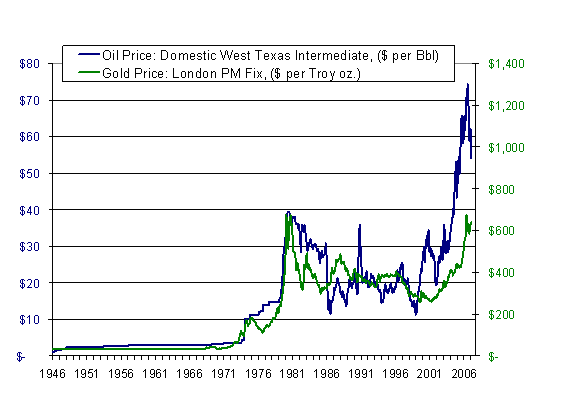 The world runs on energy, and for the foreseeable future, most of that energy comes from oil. As oil prices rise, therefore, so does price inflation...an environment that decidedly favors gold.

War or no war?

Just because attacking Iran would be an invitation to disaster doesn’t mean that Washington won't do it. Governments are capable of the most egregious blunders, blunders that in the 20/20 hindsight of history are viewed with incredulity.

Among the very long list we could point to the decisions of both Napoleon and Hitler to invade Russia. Then there was John F.Kennedy choosing to step into the boots abandoned by France in the rice paddies of Vietnam.

In the case of Iran, our grandchildren may some day look back and identify Oct. 2006, when the United States deployed a carrier battle group led by the USS Dwight D.Eisenhower to the Persian Gulf, as being the first spark of the flame that led to conflict.

That carrier group has since been joined by the USS John C.Stennis (March 27) and the French carrier Charles De Gaulle. On May 10, the nuclear powered USS Nimitz super carrier, the lead ship of its class and one of the largest warships in the world, moved into the gulf to relieve the Eisenhower. This is only the second time in history that the US has maintained two carrier groups in the narrow and dangerous waters of the Persian Gulf.

And the saber rattling goes on. At a recent United Nations conference, the US warned that the Iranians may plan to withdraw from the Nuclear Non-Proliferation Treaty, as North Korea did in 2003. The underlying message? "Look at what the Koreans have done since."

At the same time, Iran’s president Ahmadinejad is touring the Persian Gulf states, doubtlessly trying to rally support for his cause. And even if the United States, or Israel, is not intending to strike, who’s to say the Iranians, feeling threatened, won’t give themselves a fighting chance by striking first? Or, that a terrorist cell won’t unleash missiles from the Iranian shores to get the ball rolling.

Once the shooting starts, who fired the first shot won’t much matter. What will matter are the consequences. And among the most immediate of those consequences will be – according to the Iranians themselves – a closing of the Strait of Hormuz, the only sea route through which oil from Kuwait, Iraq, Saudi Arabia, Bahrain, Qatar and most of the United Arab Emirates can be transported.

That means a halt in the shipment of around 16 million barrels of oil per day, roughly one fifth of the world’s daily oil production. By conservative estimates, this alone could send oil to $100 per barrel in short order.

As a preview, consider the oil crisis of the 1970s, when members of the OPEC cartel announced they would no longer ship petroleum to nations supporting Israel – in other words, the United States and its European allies.

Crude spiked to hit a 134.6% increase inside 30 days. Simultaneously, gold rallied for a 72% year-over-year increase in price.

Today, however, the situation is far more dire. That’s because, today, the US Dollar is already under extreme pressure due to decades of prolific government spending – spending only made worse by the Iraqi war.

Today, there are over six trillion US dollars in foreign hands, and worse, those dollars now serve as the world’s de-facto reserve currency, littering the vaults of central bankers from Australia to Zanzibar and all the letters in between. That is an unprecedented occurrence in the history of humankind. A further loss of faith in the US government, an inevitable reaction to an expanding war, and sure knowledge of the extraordinary direct and indirect costs of that war would only accelerate and exacerbate the monetary crisis now looming on the horizon.

So should you bet on war? Despite the saber rattling, it’s still a coin toss. But it seems to us, a coin toss gold investors can’t lose.

On one side of the coin we have the status quo – an inevitable monetary crisis. On the other, we have a war with Iran, sending gold straight to the moon. Either way, it seems extremely rational to be diversifying into gold – and for real upside, quality gold stocks – at this critical point in time.

We are in uncharted waters, every bit as dangerous as the overcrowded Persian Gulf.