END_OF_DOCUMENT_TOKEN_TO_BE_REPLACED

Not a good sign...
JUST two months, writes Frank Holmes at US Global Investors.
That's how long the pandemic-triggered recession lasted, from February to April 2020, making it the shortest economic downturn in US history, according to the National Bureau of Economic Research's (NBER) Business Cycle Dating Committee.
For those scratching their heads, the NBER makes clear that this does not mean the economy "has returned to operating at normal capacity," only that the expansion got off to a (very) slow start soon after the whole world came to a screeching halt in early 2020.
Indeed, the shockwaves of those two months are still being felt: Initial jobless claims remain at elevated levels. Commercial air travel, especially business travel, hasn't quite fully recovered, though it's showing signs of improvement.
And then there's unprecedented government spending and money-printing, which continue to this day. Due mainly to stimulus measures, the US deficit is expected to hit $3 trillion this year; meanwhile, total assets held by the Federal Reserve are on their way to $9 trillion.
A lot of this money has flowed into stocks and other risk assets. According to Morningstar, mutual funds and ETFs saw net inflows of $722 billion in the first six months of the year, the largest semiannual amount going back to 1993. As of the end of 2020, a record $5.4 trillion sat in funds that passively track the S&P 500, Axios reports.
Take a look at the chart below. Investors' appetite for risk is at an all-time high. Stocks as a percent of households' financial assets are above 40% for the first time ever. What's more, Americans are trading on margin like never before. At the end of June, margin accounts totaled an unheard-of $882 billion, up 50% from just a year earlier. 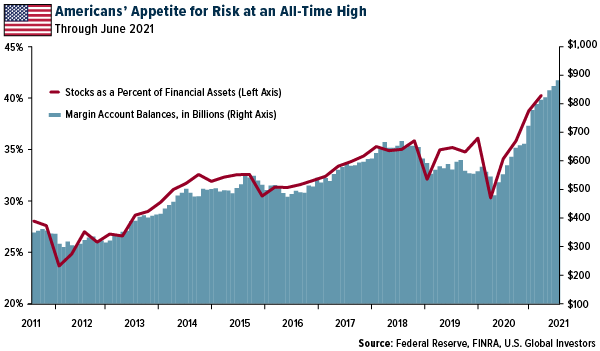 A big part of this story is who is doing the investing.
Thanks in large part to $1,200 stimmy checks, there's been an explosion in the number of retail investors. Ahead of its initial public offering (IPO), Robinhood reports that it now has as many as 18 million users, up almost double from 2019.
As many of you know, Robinhood is favored by younger, less experienced investors because trades are free, and it does a good job making investing fun. The average age of users is 31 years old. Many of them are first-time investors.
Obviously there's nothing inherently wrong about anything I've said up to this point.
There's no reward without taking on some risk. I'm thrilled that more Americans are participating in the stock market, which has done very well since cratering in March 2020. Many young Robinhooders have made some incredibly profitable investments in recent months, including airline stocks.
At the same time, the rate of money-printing we've been seeing since the pandemic struck is unsustainable, and if investors aren't cautious, I'm afraid tears may be shed when policymakers take away the punchbowl.
Remember the 2013 "taper tantrum"? In May of that year, then-Fed Chair Ben Bernanke hinted at a reduction in the pace of the bank's bond purchases. Treasury yields immediately spiked and stocks fell. And that was when the Fed's balance sheet stood at a little over $3 trillion, or two and a half times less than what it is today.
For now, current-Chair Jerome Powell says tapering is still "a ways off" as the economy continues to recover. But I urge investors to be prepared for when the party comes to an end, whether that means buying real estate, increasing your exposure to gold and precious metals, investing in Bitcoin and other cryptos or something else.
As you've heard me say many times, I recommend a 10% weighting in gold, with half of that in physical gold (bars, coins and jewelry) and the other half in high-quality gold stocks, mutual funds and ETFs. I also think it could be prudent to have between 1% and 2% in Bitcoin and Ether, including crypto mining stocks.
Remember to rebalance regularly, at least once a year, but you could see additional benefits by rebalancing every quarter.