END_OF_DOCUMENT_TOKEN_TO_BE_REPLACED

Demand to invest in silver edged back in May...
SILVER INVESTMENT exploded in the 1970s, and the 1970s were famously bad for runaway inflation, writes Adrian Ash at BullionVault.
Ergo, inflation must be good for silver, right?
Prices to invest in silver seem to agree. Annual inflation in the USA just hit multi-year (and indeed multi-decade) highs. The precious metal just set its highest monthly level in over 8 years in US Dollars.
Finding over half of silver's demand from industrial uses (versus less than 10% for its dearer cousin gold), the gray metal is getting a boost from economic re-opening as the Covid Crisis retreats. It averaged $27.46 across May and ended the month at $27.63 per ounce, both their highest since March 2013.
But a good chunk of last month's gains in the US Dollar silver price came thanks to the Dollar sliding on the currency market.
Priced in Euros, silver failed to edge ahead of August 2020 or February 2021's multi-year highs, and it came further below those peaks for UK Pound investors.
Inflation in the cost of living is also very US-centric, at least for now, and thanks at least in part to that falling Dollar. Neither the UK nor the Eurozone got anywhere close to the States' quarter-century record on the latest CPI data.
Yet rather than encouraging a flood of new silver investment among US residents, last month's rise in prices actually saw US users of BullionVault take profit and turn net sellers as a group overall. And their sales were more than offset by positive net demand among UK, Eurozone, and all the other users of the world's leading marketplace for physical silver, each gram stored and insured in each client's choice of London, Singapore, Toronto or (most popular) Zurich. 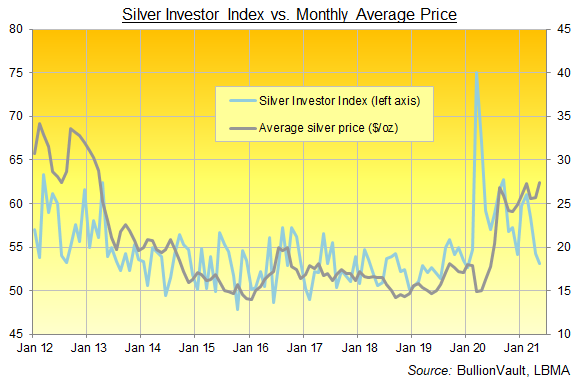 Worldwide, the number of people starting or adding to their physical silver investment across the month rose 4.8% from April's 14-month low.
The number of sellers in contrast jumped 28.7% from April's 6-month low.
Together, that saw the Silver Investor Index – BullionVault's unique measure of revealed preference among people actively investing in precious metals – edge back to a new 16-month low, dropping from 54.3 in April to 53.1 in May.
Like its bigger and older brother the Gold Investor Index, this figure would read 50.0 if the month saw the number of net buyers equal the number of net sellers exactly.
The Silver Investor Index spiked on spring 2020's Covid Crash in prices to 75.1, a new record on our 9-year old series.
By weight meantime, and even with US clients becoming sellers as a group overall, silver investing net of customer selling totalled almost 7.4 tonnes in May. One-third smaller than April, that was the lowest since last July, and 59.7% below its 12-month average.
That average is a hard act to follow however, thanks to 2020 marking a new record year for net silver demand on BullionVault. Last month's inflows were also one-third greater than the pre-Covid 5-year average, and they took total client silver investment up above a record 1,200 tonnes worth a new record of more than $1.0 billion.
Here's a little of that silver stack, snapped by the specialist inspectors who count, handle and check each and every bar of Good Delivery bullion belonging to our users. 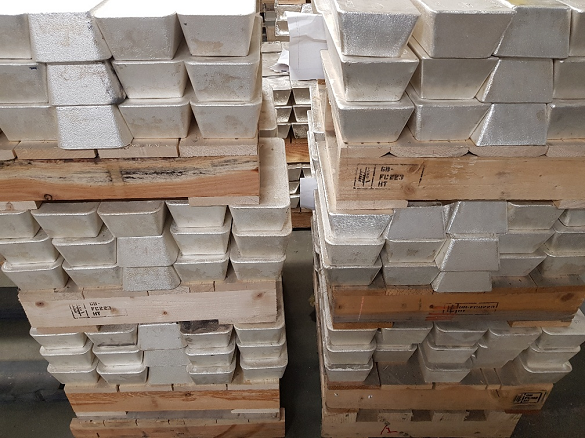 Now, a billion dollars might not be quite what it was, but it's still a chunk of change.
For instance, $1 billion is roundabout the total global revenues earned by movie-theater group AMC last year...
...which was $5.5bn shy of its costs...
...creating its 3rd loss in 4 years, and very much the worst thanks to the Covid crisis shutting cinemas and scaring away movie-goers worldwide.
Yet $1 billion is also how much volume the "meme stock" traded every hour on Wednesday, as the Reddit/WSB crowd squeezed its share price up to new all-time highs, jumping more than 30-fold for 2021 to date.
So yes, a billion dollars is a lot, but also not so much. Not in today's zero-rate, QE-fuelled financial markets. Not with inflation hitting multi-decade highs in the world's largest economy.
Still, it's how much you would need to buy the investment silver now owned by customers of BullionVault. All 1,200 tonnes of it. If all those investors were selling at current prices. Which they're not.
Investing in silver – like choosing to buy gold – offers a classic and popular way of trying to defend some of your long-term savings from losing value thanks to inflation and/or currency weakness.
For as long as that debasement remains official policy for the US Fed and all other major central banks everywhere, expect silver's underlying investment trend to continue. But just maybe don't expect to repeat the 20-fold price jump of the 1970s, not after silver prices have already risen 135% from spring 2020's eleven-year lows in US Dollar terms.
Attachments: