END_OF_DOCUMENT_TOKEN_TO_BE_REPLACED

Whether the US Fed wants it or not, interest rates are rising...
FOR MONTHS I have been warning that interest rates will soon begin rising, writes Sasha Cekerevac at Investment Contrarians.
Well, that time is clearly now – we are seeing a significant shift in interest rates. And that means that this is the time for investors to act.
When I began saying that interest rates were due to rise – because I predicted that the Federal Reserve would begin reducing their asset-purchase program – interest rates on 10-year US Treasuries were less than 1.7%.
Even when interest rates broke through the two-percent level, I wrote my article " Why US Treasuries Are Still the Worst Investment", which warned readers to move out of fixed-income investments.
That opinion certainly hit home last Friday when the Bureau of Labor Statistics (BLS) released the monthly non-farm employment report. For the month of June, a total of 195,000 new jobs were created.
In addition to a very strong report in June, there were significant revisions for April. The BLS initially reported that only 149,000 jobs were created, but that number was later revised upward by 50,000 for a total of 199,000 new jobs; the May report was revised upward by 20,000 jobs.
While some investors might have had doubts about whether the Federal Reserve would begin to reduce its asset-purchase program, the latest data points should now completely eliminate that idea. As I've been writing about for the past few months, the Federal Reserve will, in my opinion, begin reducing its asset-purchase program – and that will have a significant impact on interest rates.
After the release of the strong employment report, 10-year US Treasury notes jumped 18 basis points to yield 2.68%. That means that since the month of May, 10-year interest rates on US Treasury notes have increased by approximately one percent.
That doesn't sound like a large increase in interest rates, but in percentage terms, it's very significant. Essentially, the market has already priced in most of the initial phase of the reduction in the asset-purchase program that I believe will begin in September.
The chart for the iShares Barclays 20+ Year Treasury Bond Fund (NYSEArca/TLT) is featured below: 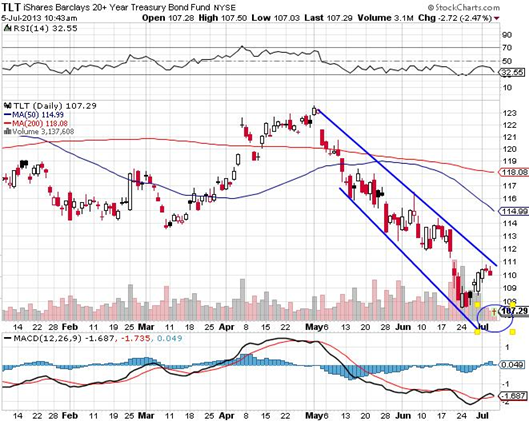